SeepeopleS to perform homecoming show at The Grey Eagle 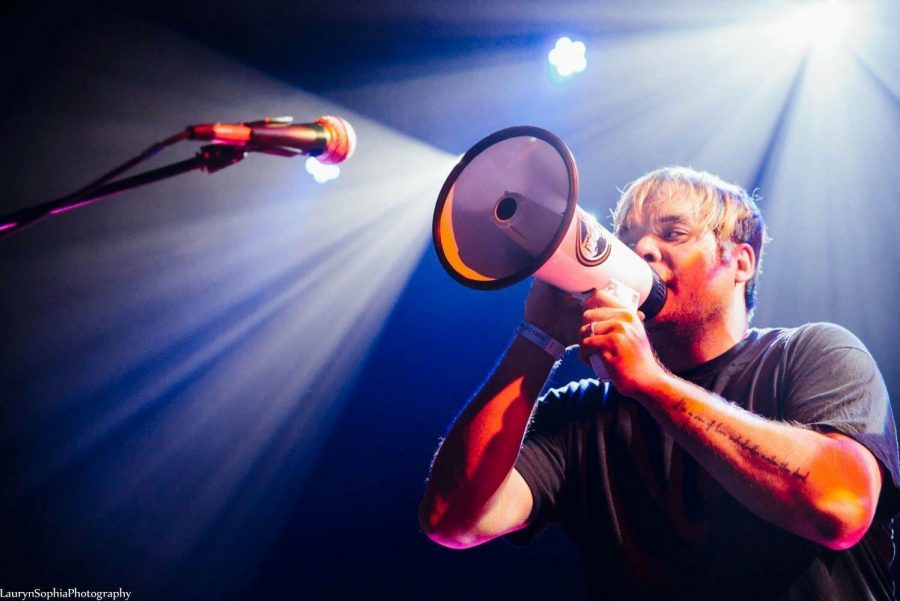 Will Bradford of SeepeopleS belts through a megaphone. SeepeopleS will play a show on Sunday at The Grey Eagle in West Asheville. Photo courtesy of Lauryn Sophia.

Karrigan Monk
Assistant Arts and Features Editor
[email protected]
Will Bradford wanted to see more people, so he took his megaphone and band members on the road and SeepeopleS was born.


SeepeopleS is Bradford’s nearly two-decade-long musical project. Born in 2000 in Boston, the band began after another ended.
“We were called Cosmic Dilemma, which is a terrible band name. It used to cause constant dilemma, but at the time we had a couple extra members who didn’t want to tour very hard, but the rest of us did,” Bradford said. “We wanted to go ‘see people’ and play to different audiences.”
Four years after their inception in Boston, SeepeopleS relocated to Asheville until 2011. Bradford explained the move to Asheville was a result of wanting a warmer place and falling in love with the city while touring.
SeepeopleS have no real genre. Citing “everything” as musical influences, the band’s self-identified “anti-genre” begins to make sense.
“Back in the mid-’90s I was a DJ. I always sort of was going to raves the same time I was going to rock concerts and what not. I also produced a lot of music for other bands,” Bradford said. “I just wanted to have a band where I could be everything.”
The band is very much a product of Bradford’s love and attention. The only constant member, Bradford is also the primary songwriter.
However, Bradford said he is more than willing to collaborate and is excited to release collaborations he has been working on when HATE is released in April.
HATE is the second release in a three-part EP series. The first, LOVE, was released last year.
“When I go through a writing period, I like to keep those songs close together if not on the same album,” Bradford said. “Those were sort of love songs on the last one. These ones, I wouldn’t say they are hate songs, but they’re probably addressing anger and upsetment and sadness and things that sort of lead to hate.”
The third and final installment in the series, LIVE, will feature live recordings the band has been collecting the past few years.
When writing songs, Bradford said he writes almost exclusively from personal experiences. He said he tries to connect his singular experiences to something more universal which other people can relate to.

To bring these experiences to the people, Bradford takes SeepeopleS on the road. They have been touring almost non-stop for 15 years. Bradford says while touring can sometimes be routine, he enjoys seeing how things change over the years.
“Each town has got its own sort of quirks and cultures,” Bradford said. “A town can change a lot in 15 years and certainly audiences change, so I think that aspect of it is never routine, which is why it’s a cool job, I guess, because it says fresh.”
Live shows also offer a different listening experience for fans and a different performance experience for SeepeopleS.
The band may not be known for their high-energy, dance-friendly tracks, but their live shows are. Bradford said he often uses a megaphone during shows and they all encourage the audience to dance. Wild antics are simply part of the show.
“It’s the recorded music but probably on steroids. Every thing’s amplified, not just the guitars,” Bradford said. “It’s certainly an amplified experience and I would even say a bit more emotional.”
SeepeopleS will be at The Grey Eagle on March 12.
Delete Image
Align Left
Align Center
Align Right
Align Left
Align Center
Delete Heading