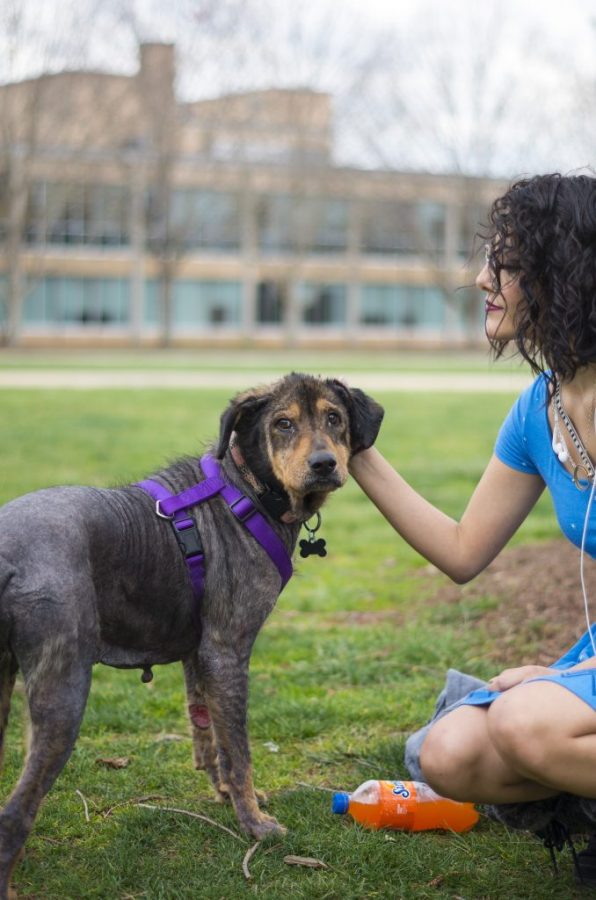 Meghan Benavides is one of Ranger's caretakers and hopes the social dating app Tinder will help to get him adopted into a loving family. Photo by Nick Haseloff.

Karrigan Monk
Assistant Arts and Features Editor
[email protected]
A few months ago, Ranger was living in a quarry in Georgia, fighting for survival. Now he spends his time swiping right trying to find someone to go home with.
Ranger is a 10-year-old dog fostered through Brother Wolf Animal Rescue. His foster parents, Shane Gamble and Meghan Benavides, decided to start a Tinder page for him to try to find an adoptive family for the mutt.
“We were thinking about making an Instagram originally,” senior new media student Benavides said. “We had gone to Brother Wolf so the doctors could give him a vaccination and we mentioned the Instagram page. They said, ‘Well, some of our foster parents have actually done Tinder pages,’ and I was like, ‘Oh that’s such a great idea.’”


Benavides said she was surprised to actually get responses from the page. Despite the response, Ranger is still in foster care because he is on too many medications to go into a permanent home. Ranger’s fur is gone from almost all of his body except his head as a result of mange, a skin disease caused by mites. The medications help to combat this and make him more comfortable.
Despite setbacks from the disease, Gamble said Ranger is doing extremely well.
“He was found with 40 other dogs and was the only one of those dogs to willingly walk up to the rescuers,” Gamble said. “He is doing leaps and bounds better than he was. He is eating well and walking well and growing a lot of hair back.”
Ranger is only one of nearly 500 animals in the care of Brother Wolf, according to Jackie Teeple, marketing and media director of Brother Wolf. Of these, only about 300 are healthy enough for adoption.
Although Brother Wolf has a no-kill policy, the shelter in Ranger’s hometown did. Benavides said because the kill rate was so high, people would leave their pets in the quarry to give them a better chance.
The shelter was not unaware of this problem. They contacted Brother Wolf asking for help and they made the journey to Georgia. Although they got some of the dogs out, more are still waiting to be rescued.
For the rescued dogs, the journey is still far from over. Once they arrive in Asheville, they are nursed back to health and then placed in a foster home where they will continue their recovery. If they are lucky, they will get adopted soon. If not, Brother Wolf does everything they can to place them in a loving home.

“When an animal has been with us for longer than usual, we work on marketing campaigns to get them more exposure. This may mean a short video showing their true personality, which can be hard to see in a shelter setting, sending them to more events or hikes when appropriate or a full-on marketing campaign on Facebook,” Teeple said. “If an animal has been at the adoption center too long, we try to put them in a foster care where they can relax and learn some new skills. Animals are never euthanized for being with us too long.”
Teeple said she understands why using Tinder might work for finding a pet a “furever” home.
“I think dating sites are a great way to get more exposure for animals looking for homes,” Teeple said. “When folks are lonely or looking for companionship, a new animal in their lives might be a great fit.”
Ranger has only been with Benavides and Gamble for four weeks, but both acknowledge he may be difficult to adopt.
According to Benavides, several people have expressed interest through the Tinder page, but no one has taken the next step. She said she hopes more people will be interested when his hair grows back and he gets healthier..
“He’s the first foster dog we’ve had. We really love him,” Benavides said. “We’re gonna be sad when he leaves, but he’s so sweet we’re not really worried about him not finding a forever home.”
Delete Image
Align Left
Align Center
Align Right
Align Left
Align Center
Delete Heading