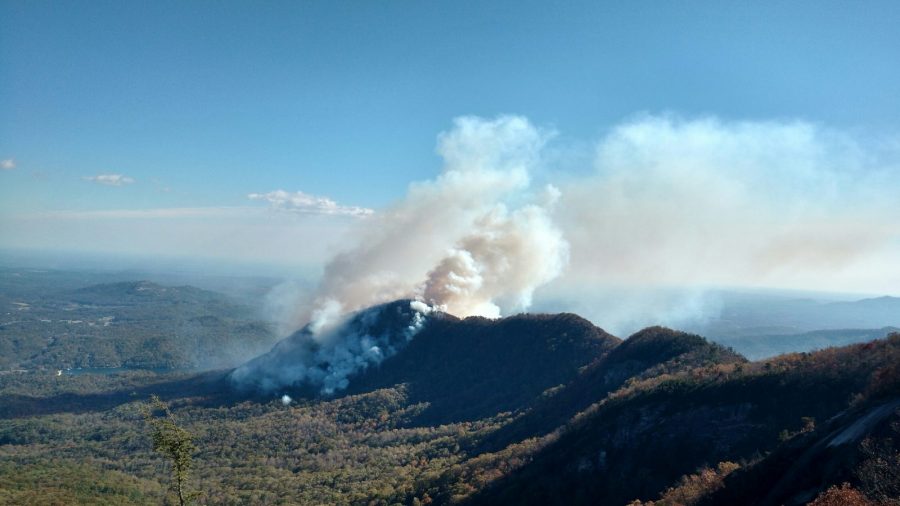 The Party Rock fires burned for nearly four weeks last November, scorching more than 7,000 acres and leading to evacuations of residents of Lake Lure and the surrounding areas. Photo by Marshall Ellis.


Regional environmental experts expect minimal long-term damage in the aftermath of last year’s fires.
The Party Rock fires burned more than 7,000 acres of forest last November, making it one of the largest fires in decades, according to Mountain Region Biologist for North Carolina State Parks Marshall Ellis.
“It wasn’t so much the intensity that freaked everybody out, it was the size,” Ellis said.
The fires, which raged for nearly a month, were some of the largest Ellis said he has seen in his 24 years as a wildfire expert. Despite this, he expects the environment of the affected areas to experience minimal changes.
“Most of the effects from that fire, in terms of severity, were actually pretty moderate. We do not expect to see large scale changes in the forest structure,” Ellis said. “What you’re going to see across this landscape is a series of holes punched in the canopy where the trees have been killed. That’s not unexpected and really not a problem.”
Ellis also said in addition to the trees lost to the fire last fall, more trees may perish in the next few years due to delayed mortality.
“Another thing we’ll see in the long-term, because this fire went on for almost four weeks, is that a lot of these trees that have survived the fire initially have been weakened by such a sustained and long-term fire. So I’m sure we’ll lose some additional trees,” Ellis said. “We don’t really have a feel for how many it will be but based on some other fires with similar behavior, I don’t expect it to create a major change in the landscape by any means.”
Natural Resource Specialist for the U.S. Forest Service Lisa Jennings said while some changes are expected, fires within the environment help promote growth and diversity.
“Disturbance is part of nature and when a disturbance happens in the forest, that’s kind of what creates a diversity of forest types and sets the forest back to an earlier stage,” Jennings said. “We have different age classes of forest that can support different plants and different animals and fire is a natural thing that supports that diversity.”
Jennings reports wildlife populations also undergo changes during and after fires. Most animals, such as deer or birds, adapt to fires and rarely experience widespread, fire-related mortality.
“It’s definitely not what people have in mind when they hear about a forest fire where you think of like Bambi and those negative images that we’ve seen over time,” Jennings said. “All fires affect the animal population and depending on the species it could be positive or negative.  Most of the wildlife that is mobile get out of there. It’s part of their nature. When they see danger, they run.”
Jennings said the Forest Service is working with other state agencies and nonprofit organizations to reduce the risk of wildfires like the ones at Party Rock by using controlled burns. The goal is to use controlled burns on about 6,000 acres in North Carolina per year to reduce risk.
“There’s what we call the fire triangle. A fire needs oxygen, which obviously we can’t do anything about. It needs heat, which again is hard to control because there are many sources of heat such as lightning. And then there is fuel, which is the one thing that we can control,” Jennings said. “So that’s what prescribed burning does. We’re controlling the fuel element and getting rid of those dangerous fuels and it is very successful. We’re doing it on our terms. I like to say we’re fighting fire with fire.”
Clint Calhoun, environmental management officer at the town of Lake Lure, said the effects of the fire still remain on the landscape in the form of burnt and fallen trees.
“As far as the environment goes, physically things look a little differently than they did before, especially if you’re in the woods,” Calhoun said. “If you’re out away and just looking at the mountain, you really can’t tell other than just a few places along the ridge.”
Despite this, Calhoun said many plants and trees are beginning the natural cycle of growth as spring begins to arrive. One almost immediate effect of fire is a boost of wildflower growth.
“Wildflowers are blooming now in the areas that were burned. We’re really encouraged by what we’re seeing so far,” Calhoun said.

The Party Rock fires were long overdue because of fire suppression in the region, Calhoun said. However, he expects controlled burns to become a part of forest maintenance to prevent similar fires from occurring.
“There’s going to be some pretty serious consideration as far as reintroducing fire into the landscape to control fuel loads and hopefully prevent this from happening like this again,” Calhoun said. “Hopefully we’ll see some positive changes. We’re starting to see that now, but there’s still a lot of work to do.”
Calhoun said he hopes the fires do not discourage people from visiting the town.
“There is some worry that the message that is out there is that everything is just burned to the ground and it’s not going to look the same as it was. We’re trying to get people to understand that that’s not true,” Calhoun said. “Everything is still open. There were no businesses lost, no homes lost and no lives lost. We want to see people come back. We think that people will, but it’s going to take some time.”