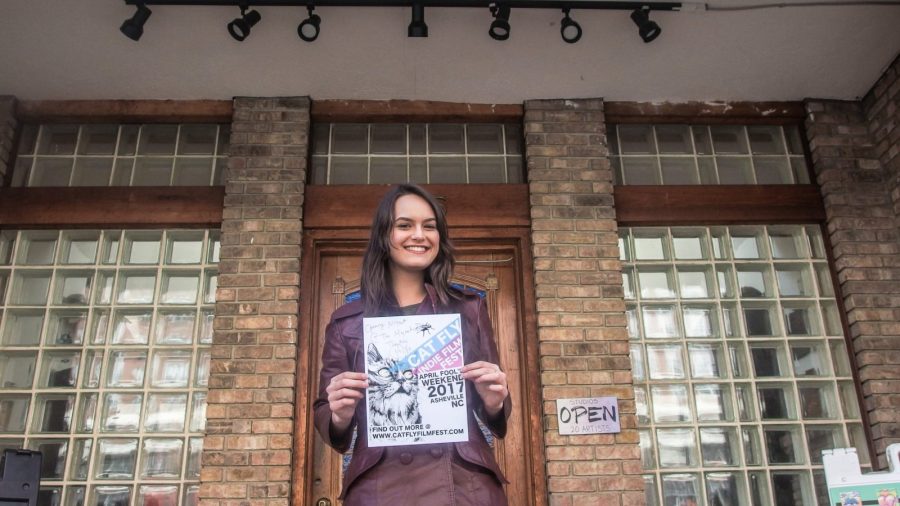 Catherine Wityk wants to put Asheville on the map with the Cat Fly Film Festival. Photo by Elijah Alexander.

Sarah Shadburne
Arts & Features
[email protected]
From the brains of four friends united by their passion for film, The Cat Fly Film Festival springs forth like a conceptual Athena, taking life and rising up from the streets of Asheville with gusto to accentuate the enormous creative potential of the Southeast.
“Cat Fly was inspired to get local filmmakers together in one room and show their work,” said Keeley Turner, the 24-year-old co-founder of the Cat Fly Film Festival. “We work so hard on these micro-budget short films and we want them to be seen.”
The Cat Fly Film Festival came to fruition from the efforts of founders Brittany Jackson, Madeleine Richardson, Catherine Wityk and Turner, all friends who graduated from UNC Asheville and want to give their community an outlet for film expression.
Wityk, a 22-year-old recent graduate of UNCA, seeks to utilize her creativity as a storyteller, spreading wisdom and life lessons to other people.


“I really wish I could push things like empathy,” Wityk said. “In this day and age, political situations are so complicated and it relates to people in their personal lives and relationships. Things get really complicated, people make mistakes. If we just had more empathy for one another we’d be able to listen and understand better. We could all coexist.”
The festival will be comprised of three nights, each with a different theme from March 31 to April 2, ranging from drama-horror, comedy and experimental indie-artistic films, kicking off night one at The Magnetic Theater in the River Arts District.
“Themes that are very human that everyone can relate to are most important in any artistic work, but I hope to latch onto themes like that in my own work,” Wityk said, mentioning a recent music video she directed about the intimacy and endurance of friendship. “I’m welcoming people to listen.”
Turner said she wants to inspire people to search for and grow through the acquisition of their passions. Much of her own work deals with exploring the complexities of the inner worlds of her characters.
“Making short films is my passion,” Turner said. “I want to inspire others to go within and search themselves, rather than going through their daily routines and getting stuck in that, waking up one morning and not knowing who they are because they didn’t search.”
The founders strive to give a platform to the original voices of Asheville filmmakers, as film possesses the ability and responsibility to broadcast poignant moral and societal messages, according to the festival mission statement; people shape the future.
“We got a lot of submissions,” Turner said, delight in her voice. “We had our own screening that we watched every single submission we chose. We were just looking for professional, creative work, paying attention to the quality — of the story, the visual — and that had something to do with Asheville.”
Wityk expresses similar delight as she talks about the process of going through submissions, noting how little they marketed yet how many submissions they received organically.

“A place like Asheville has so much to offer in terms of film and art and spreading positive messages that might help people,” Wityk said. “I think Asheville’s just got a lot of really talented minds. The point of Cat Fly is to give those minds a platform and share it with everybody.”
Richardson, a 22-year-old recent UNCA graduate on the Cat Fly team expresses her passion for graphic design, what she refers to as her first love.
“When I decided to go to UNCA I realized immediately I wanted to study new media. It lends itself to so many different creative fields,” Richardson said. “I love the freedom in what you can create.”
In her work, Richardson gravitates toward telling stories that can change the perception of a person or audience and creating empathy for different kinds of people.
“In school at UNCA I worked on a documentary called “Welcome to Foundy,” Richardson said. “It’s about how a local DIY skate spot was created as an outlet for skaters to both escape and embrace stereotypes they experience.”
Richardson said she hopes to raise awareness and funding for indie filmmaking through her involvement with Cat Fly.
“There are some very talented artists here in AVL,” Richardson said.
Wityk said she wants to bring the Asheville film community together, regardless of the skill-level of participants. Enthusiasm and passion are all they need to qualify. This is something all the founders of Cat Fly want.
“None of us are getting paid for this,” Wityk said. “We’re not doing it for profit, we’re doing it for ourselves and for the community. This community and this town has helped me grow so much as an artist and person. I don’t know if I even would’ve gone into film if it wasn’t for Asheville.”
Tickets and weekend passes available at universe.com with prices adjusted for individual nights.
Delete Image
Align Left
Align Center
Align Right
Align Left
Align Center
Delete Heading