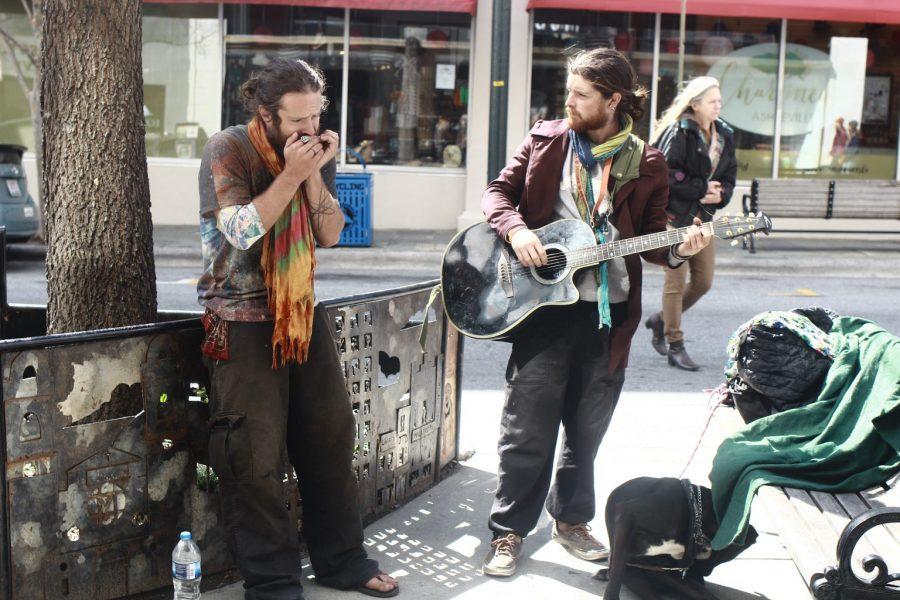 
Squid Ward, 30, street musician, originally from Pennsylvania
How would you describe your style?
“Everything and anything, no judgement, I guess anything. Our musical style’s like folk, country, punk, bluegrass. Yeah, folk, country, punk, really. Some people like to call it pirate rock.”
Pirate rock? Yeah.
“I don’t know. My style’s just whatever I want, whatever I choose. I mish-mash everything. It doesn’t matter to me, yeah, thrifty things.”
Cool. So, what would you say are some of your musical inspirations?
“A lot of classic rock, punk rock, I like a lot of EDM stuff, too. I’m very broad on my music range. I’ll listen to some country, some R&B, but I kind of take it from a whole for the most of it.”
Cool cool. What would you say is one thing you like about Asheville and dislike about Asheville?
“I haven’t found too many dislikes yet, but I really like just the layout of the town, the friendliness that I feel here. There’s a lot of good vibes here. It’s a big music and arts town. So, I’m all about the freedom of expression. That’s something that drew me here. I’ve met a lot of awesome people in just the few days that I’ve been here. I guess maybe the only thing right now I dislike is the cold. That’s about it.”
Oh God, yeah. It’s brutal.
“And the police.”
Yeah yeah, the APD. Do you have a life motto you live by?
“Peace, love and happiness.”
If you were to describe yourself in three words, which three words would you choose and why?
“I’m kind of indescribable.”
Jam Sesh, 26, street musician, originally from Pennsylvania
If you were to describe your musical style, would you say it would be the same (as Squid Ward)?
“Like my musical genre?”
Yeah.
“Yeah, what we play right now is like folk, pirate rock, maybe some Irish twang in there sometimes. But, yeah, for the most part, the same. We play together all the time. We’re called Velvet Alley.”
Velvet Alley? Cool. That’s a great name. So if you have a life motto that you live by, what would you say it would be and why?
“Be kind to everyone because it’s all about putting positivity out there and trying to be happy and living all together, because we’re all here on this Earth anyway. So, we’ve got to come together and be happy.”
How did you guys meet?
“This is my brother. This is my older brother. I met him 26 years ago at our mom’s house. We were playing guns and stuff like that.”
So if you were to describe yourself in three words, which three words would you use and why?
“Let’s see here. I’m a sweetheart, for the most part, charismatic and a badass.”
So, if you were to describe one thing you like about Asheville and dislike about Asheville?
“Well, I like a lot of things. I love the mountains, for one thing. It’s surrounded by mountains and the whole town is very hilly and very cool. There’s cool houses everywhere and stuff. We’ve met a lot of really amazing people here so far. It’s very artsy, very musical, very us, you know, very dog-friendly, which is a big, huge thing. It’s a tiny bit cold right now. When we first got here, some of the street kids were pretty obnoxious, and that’s probably why the cops are so heavy around here, you know? But other than that, the skateparks are awesome. We’re both skaters and stuff like that.”
So if you were to describe musical influences, what would you say?
“Grew up on classic rock and classic metal and stuff like that, like Ozzy and Black Sabbath. So, that’s how we grew up and then we started getting more into punk rock and stuff and then I think, electronic music changed me from only hard rock and punk rock to everything else. But, right now, bluegrass is awesome. I’m loving the bluegrass. I’m loving funk. Funk is amazing. I just have all sort of influences. I even get down with country too much, especially in my past years. I like actual country.”
Like Patsy Cline?
“Yeah, not like pop-country or the radio, stuff like that. I love banjo, violins, you know, mandolin, real country stuff.”
Delete Image
Align Left
Align Center
Align Right
Align Left
Align Center
Delete Heading