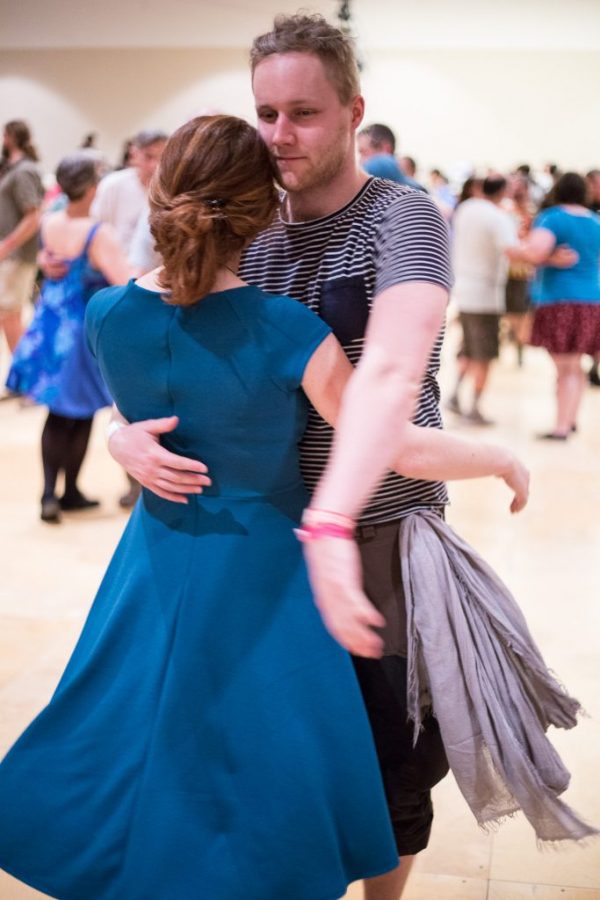 Nis Klausen first began contra dancing when he went with his father three years ago. Photo by Ryan Carollo.


Contra dancing is an art, exercise and a great way to become connected with one’s community.
Ryan McGinn, treasurer of the UNC Asheville Contra club, said he recently got into dancing. Two summers ago, his friends were able to talk him into going. Though McGinn said he did not want to dance, particularly in public, his nervousness soon turned into excitement.
McGinn recently helped Nikki Madle launch the UNCA Contra club. He said the group was created mostly to help with on-campus students finding rides to Warren Wilson College’s contra dance, the Old Farmer’s Ball, on Thursday nights.
“Contra dance is a close relative to square dance. It’s a partner dance that’s set up in a series of long lines,” McGinn said.
Contra dancing is comprised of about 15 different moves, all of which are based on walking to a beat, McGinn said. A caller stands at the front of the room and calls out specific moves to create a pattern. This is repeated until the song is over. A person can finish a dance, hydrate, find a new partner and dance again, McGinn said.
Grace Sideris, the vice president of community relations for the club, said she first learned to contra dance from a beginner lesson hosted by the club. Though she planned on only going to the lesson, Sideris went to the Warren Wilson contra that night and danced for three hours. She regularly attends the Old Farmer’s Ball.
“Since then, I’ve gone every week I’m at school unless something comes up,” Sideris said.
For senior applied math student Nis Klausen, Contra dancing was a way for him to connect with his father.
Originally from Denmark, Klausen said the first time he visited the states, he and his father attended a dance two hours south of Asheville. Three years later, Klausen continues to dance.
He said he prefers contra to other partner dances — he enjoys the playful energy. Klausen also recommends it for those who have little to no dancing experience. Because of the UNCA Contra club, Klausen is able to share rides to and from the dances. There are other contra dancing events in the area. A recently invented dance style combines old and new dancing elements.
“There’s also a phenomenon called techno-contra, which is essentially contra dance with music and lighting similar to what one could find in a club,” Klausen said.
McGinn said as long as one is comfortable with physical contact and eye contact, contra dancing is a great opportunity to be social. Because of the intimacy of dancing, McGinn said contra groups are trying to create a strong consent culture so every dancer feels respected.
“The community is very welcoming to new people. We always love seeing new faces and watching them bounce around,” McGinn said.
Delete Image
Align Left
Align Center
Align Right
Align Left
Align Center
Delete Heading