America: The land of Sugar 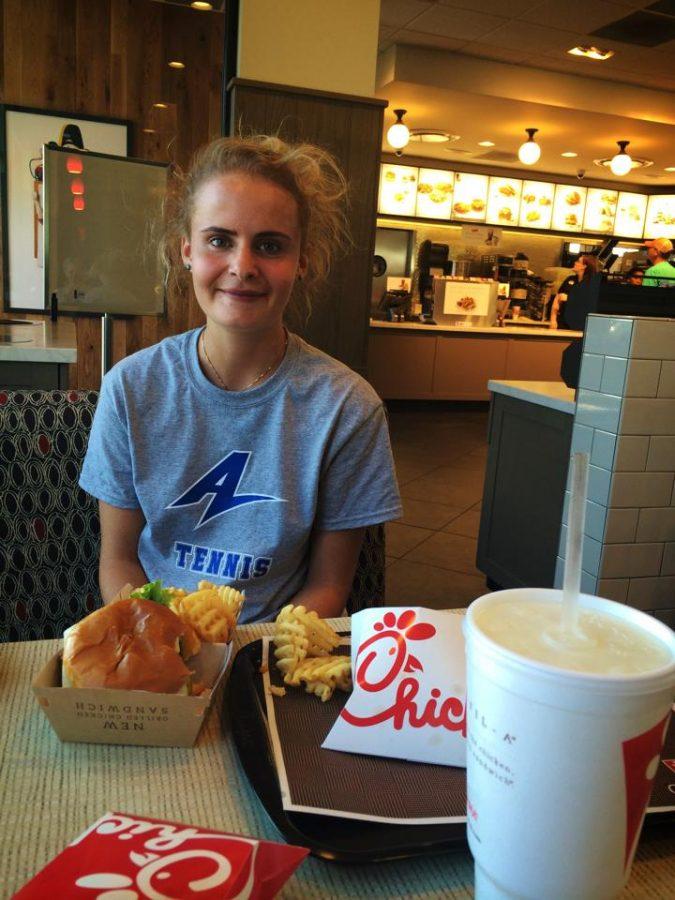 My first time at Chickfila

Amalie Davidsen
Opinion Writer
[email protected]
“Amalie, the first thing you have to do when you go over there is to buy a Mountain Dew at a vending machine. Those are massive.”
These were the final words a friend said to me before I took off to America. Sweets and sodas never have been my thing, but everybody seemed ecstatic on my behalf knowing I was on my way to sugar heaven. My friend even pointed out the sizes in the American vending machines are “much” bigger than the ones at home in Denmark.
Personally, that was not what I was looking forward to the most. I had, for my whole teenage life, treated my body as if it was five years old, only eating the bare minimum in order to keep up with the modern, very European, body ideal — being very skinny. At some point, my dad had to force me to eat more than a yogurt before an important tennis match.
Being skinny was all that mattered to me and being healthy was not my main priority.
Today, I am still struggling with disturbing thoughts of the ideal body, but I have learned eating is necessary in order to live a healthy lifestyle.
Therefore, my biggest fear of going to America was gaining weight and becoming fat. Honestly, I was petrified.
In Europe, loads of prejudices against Americans exist — they are fat, they only eat Burger King, they do not drink water but only Dr. Pepper, and so on. Even though I have had friends who studied abroad in America and came back with a lot of experience along with extra pounds of weight, I know this is not the case for every American.
Growing up, the documentary “Supersize Me” was often shown in middle school biology or social science classes as an example on what not to do, and the fear of McDonald’s has always haunted me. I clearly remember the scene where the American kids do not recognize a picture of Jesus, but get very excited when they were shown a picture of Wendy and Ronald McDonald. People laughed a little about this.
For sure, the amount of sugary drinks and processed foods was overwhelming at first. But I also fell in love with the American sugar heaven, and before I knew it I had gained almost 18 pounds my second semester of freshman year.
I clearly remember the look on my mother’s face with a raised eyebrow and a disgusted grimace when she saw me in the airport, “Wow, Amalie,” she said. The pounds also came off quickly once I came home.
While living in America, I did not realize my lifestyle was unhealthy. To me it seemed completely normal eating ice cream everyday as well as six plates of food at the school café for every meal. Going home for the summer leading to sophomore year definitely put some things in perspective.
After three years in America I have learned that six plates of food for every meal is not the norm for the average person, American or European. I do enjoy the Southern fried chicken, I love late night Cookout dates, occasionally I eat at McDonalds, and Krispy Kreme donuts are an all-time favorite Saturday treat.
Going back to the vending machines, it shocks me that candy, chocolate and sodas can be sold as cheap as $1.00 at colleges. I realize healthier options are more expensive and harder to keep fresh for a long time. But, it scares me how much sugar the average American college student has access to through a vending machine, and I do see it as a serious problem regarding the reality of diabetes and other diseases haunting the American people.
According to the Centers for Disease Control and Prevention, 9.3 percent of the population has diabetes, whereas 27.8 percent of people with diabetes are undiagnosed. This shocks me, but it does not surprise me. Americans do have a more casual relationship with sugar and processed foods. Going to Wal-Mart, I always see obese people in electric wheelchairs struggling to breathe, and that makes me sad.
I am not saying eating healthy is choosing not to eat, and I do realize a bunch of Americans follow a healthy lifestyle, especially in Asheville. I do believe eating until you cannot walk is a huge problem, and honestly one that makes me angry. I know it is not my business, but I still believe it is disrespectful.
Eating contests are also disgust me.
Overeating and overeating processed food is a problem expanding into Europe because of the spread of American fast-food restaurants and supersized portions.
I believe eating is a necessity, but eating right is an art worthy to explore. I believe it is a personal choice how to eat and treat your body, and I do believe a lot of Americans, as well as Europeans, are mistreating the art of eating and their bodies, and I hope a change is going to come.