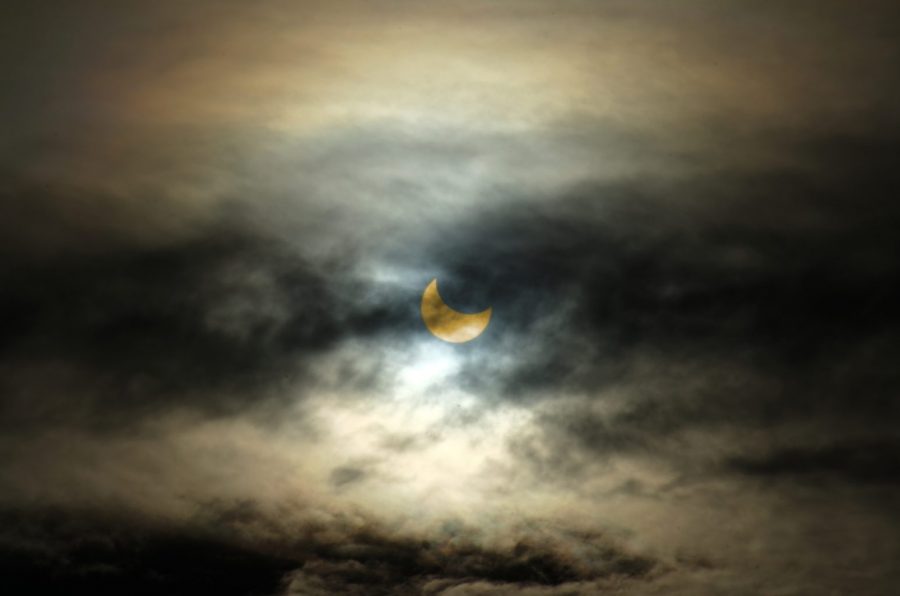 Katie Walker
Contributor
[email protected]
The first time Bill Willard, adjunct lecturer in physics at UNC Asheville, saw a solar eclipse with his own eyes, it made his hair stand up on its ends.
“As it began to get darker, it was not like how it gets dark in the evening, it was like someone was blocking the light. It was eerie because the animals reacted differently,” Willard said. “It was almost like they went to sleep, like they thought it was night time so they stopped making their noise, they disappeared, then they came back out once it was over.”
Willard attended Clemson University in 1984 when the solar eclipse occurred.
A solar eclipse will pass over most of North America on Aug. 21, according to the National Aeronautics and Space Administration. Asheville will not see a total solar eclipse but will see a 99 percent eclipse. Because the eclipse over UNC Asheville will not be total, a full blackout will not occur.
According to NASA, the partial eclipse at UNC Asheville will last from 1:08 to 4:01 p.m. The maximum eclipse will be visible at 2:37 p.m.
Judy Beck, physics lecturer at UNC Asheville, said the path of totality will travel right over Western Carolina University. The total eclipse over WCU will last from 2:35 to 2:37 p.m.
Beck said the provost office has already ordered solar eclipse glasses for students and faculty at UNC Asheville to use during the eclipse. The glasses will have a cardboard frame and material over the eyes to filter out the sun’s light.
“I think the university is definitely trying to make an effort to engage people in the eclipse,” Beck said.
Beck has seen two total solar eclipses. The first one, Beck said, occurred while she attended Williams College as an undergraduate. She and an astronomy professor traveled to Brandon Manitoba, Canada.
“During the partial phases we watched the eclipse with our special glasses and recorded some data with some instruments we had,” Beck said. “Then as totality neared we got extremely excited, you could see the shadow coming across the land approaching us. At the moment of totality we were able to take off our glasses and look at the total eclipse sun.”
The second time Beck witnessed a total eclipse she was living in Ecuador. She said the total eclipse followed a path over Colombia, which borders Ecuador. Beck traveled to Colombia to be in the path of the total eclipse, where she met a local astronomy club who gave her eclipse glasses and watched the eclipse on a hillside with a group of people.
Brian Dennison, professor of physics at UNC Asheville, has seen a total of two total solar eclipses in his lifetime as well.
Dennison said his first experience seeing a total solar eclipse happened while he attended the University of Louisville. He, along with a group of students from the university, traveled to Currituck, North Carolina for the opportunity to see a total solar eclipse on March 7, 1970.
“At that time I was an undergraduate at the University of Louisville. There was a bunch of us who worked on campus at the planetarium and we decided to go to see the solar eclipse,” Dennison said.
The group camped on an island right off the coast of North Carolina. During the eclipse the mainland was visible from the island just off the coast until darkness blocked it from view.
“The eclipse was coming from the Southwest, so we could see the mainland go dark right before we went dark,” Dennison said.
To see his second total solar eclipse, Dennison and his son traveled to Schorndorf, Germany, in 1999.
“It was cloudy and we had to drive because we weren’t sure where the clear weather was going to be,” Dennison said. “We got on the German highway, called the Autobahn, and drove like mad to get to a place where we would have a chance of seeing it.”
They drove to a field near the border of Germany and France to view the eclipse. The clouds dispersed right before the eclipse took place, giving them the opportunity to see the full event as well as take pictures.
“It is so unusual to have it go dark in the middle of the day. It is an exceptional circumstance when everything is thrown into darkness for about two minutes,” Dennison said.