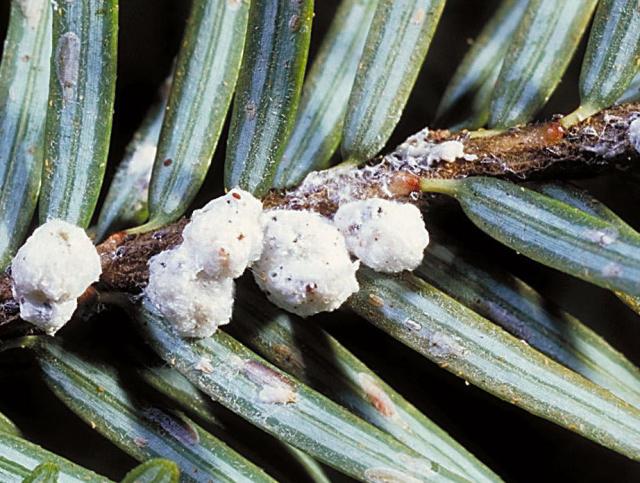 The Hemlock Wooly Adelgid, an aphid-like insect, was introduced to the U.S. by means of trade with Japan in the 1950s. Photo provided by the Hemlock Restoration Initiative.

Brooke Randle
News Writer
[email protected]
Efforts by local environmentalist groups and the U.S. Forest Service to save Western North Carolina’s native hemlock trees from an invasive pest are beginning to see some positive results.
Sara deFosset, outreach and volunteer engagement associate for the Hemlock Restoration Initiative, a local nonprofit, said the issue began in the 1950s when an aphid-like insect, known as the Hemlock Wooly Adelgid, was accidently introduced to the United States from Japan through the nursery trade. With no native natural predators, the insect immediately began destroying hemlock trees with alarming speed.
“We have a really similar climate to Japan and Japan also has native Hemlocks that have co-evolved with this pest. Their hemlocks are not affected by this pest, rather they have a predator-prey balance where the pest is there but it’s not devastating in that ecosystem,” deFosset said. “When that pest was brought over here, a place that has really similar climatic conditions but none of the native predators, it just started multiplying.”
DeFosset said hemlock trees play a vital role in the ecology of WNC, contributing to the health of rivers, plants and small organisms.
“There’s not really another tree that fills that role in our area,” DeFosset said. “When I first took this position, I thought we have to help the hemlocks because they are rare, when in fact, we have to help the hemlocks because they are everywhere. There’s so many and that’s why it’s such a big deal. If this dominant species were to disappear, then what? It would completely alter the structure of our forests.”
DeFosset said adelgids attack hemlocks by preventing them from absorbing nutrients, leading to eventual mortality.


She estimates the number of trees affected in North Carolina has risen into the thousands.
DeFosset said the Hemlock Restoration Initiative uses a multi-pronged approach to combating the adelgid, including chemical treatments to slow the destruction of individual trees. Unlike the massive spraying techniques typically found in agricultural pesticide use, deFosset said the group targets specific trees to reduce the impact on the local environment.
“A lot of people have a knee jerk reaction to using pesticides and I do, too,” deFosset said. “It’s not an ideal situation no matter how you spin it. We’re kind of faced with the dilemma of weighing the ecological impact of letting all of these trees die versus the impacts of using this pesticide. We have to think about the tradeoffs and then work hard to make sure it’s being used responsibly.”
DeFosset said another more long-term method that has gained traction in western North Carolina consists of using a natural predator to reduce the number of adelgids.
Richard “Dr. Bug” McDonald, a freelance entomologist, partners with state and local groups to introduce a predator beetles into the area in an effort to reduce adelgid populations. McDonald said part of his work has involved traveling to Seattle and other parts of the Pacific Northwest to collect beetles and relocate them to WNC.
“I’ve been out there at least 77 times. We were a part of a huge, massive effort,” McDonald said.
McDonald said the combination of chemical treatments and a predatory insect has finally slowed the destruction of hemlocks in North Carolina.
“We’ve turned a corner,” McDonald said. “What we can do in our area now, to a limited degree, is go out to some of our older sites and bring those beetles to other places in North Carolina or other places that don’t have them yet.”
Jonathan Hartsell, executive director of Blue Ridge Resource Conservation and Development, a local environmental nonprofit, said while the hemlocks still face an uphill battle in terms of maintaining a stronghold in the region, he feels optimistic hemlocks will continue to populate western North Carolina.
“I’ve had the opportunity to visit release sites in the high country of North Carolina that have had lots of beetles in the past and they’re doing really well. We’ve even seen it kind of blossoming out from these release areas,” Hartsell said. “Long-term, we’re looking to have bio-control as the main method for managing adelgids. You’re never going to get rid of the wooly adelgid completely. You just have to get in balance with them so the tree can be healthy and grow and reproduce.”
Delete Image
Align Left
Align Center
Align Right
Align Left
Align Center
Delete Heading