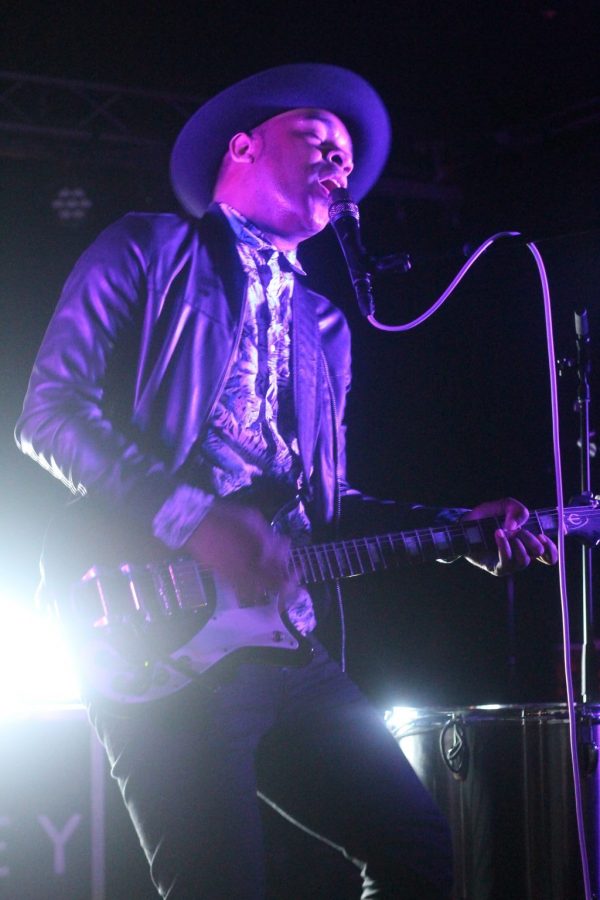 Karrigan Monk
Assistant Arts and Features Editor
[email protected]
The room was mostly empty, save a few patrons leaning against the wall sipping beers.
Although it was a quiet Thursday night at Asheville Music Hall, the stage suggested something more was soon about to happen. Instruments were scattered across the stage, waiting for a band to pick them up. A small screen to the left of the stage gave the name of the act: Mobley.


As soon as 9 p.m. arrived, the lights on the stage went dark. Rather than the full-band the many instruments implied, a single man walked onstage.
To a near-empty room Mobley picked up a guitar and a megaphone and began to play.
Almost immediately the audience stopped talking and devoted their attention to the spectacular electronic moment on stage.
“Incredibly good. Mind-blowingly good,” Mobley said sarcastically when asked to describe his live shows. “Like if you don’t make it out you will likely regret it for the rest of your life.”
However, a few moments into his set, it became clear he was not quite joking.
His synthesized vocals spilled from the stage as the audience swayed back and forth.
After his first song, Mobley took a moment to address the crowd and thank them for coming. He seemed to have realized he had grabbed the attention of the once passive audience. With one song, Mobley brought everyone in the hall closer to the stage.
Still, it was not close enough for him as he urged the audience to come as close to the stage as possible.
“We’re going to get to know each other a little bit tonight,” Mobley said. “Come closer. I don’t know what the fuck this is.”
Launching into his next song, Mobley hardly lost any energy. He described himself as a one-man band and it was not difficult to see why as he seamlessly moved between guitar, drums, samplers and keys, all the while singing without missing a note.
Mobley paused his show for a moment to ask for people to come even closer as he lowered a drum onto the floor amidst the audience. He handed several people a drumstick and told them to play along when he gave them the cue. Becoming less unsure of this high-energy performance, several people stepped forward.
“I really value having a lot of interaction with the crowds because it’s a one-man band show, I can’t lean on other musicians on the stage for that energy,” Mobley said in an interview before the show. “For me it’s all about creating that dynamic in the room with the audience as part of the performance.”
Mobley sat down at his keyboard, played a few notes and cued the make-shift drummers. Soon the room filled with a thumping from the drums while Mobley’s melodic voice soared over it.
During this song, he grabbed an audience member’s phone to take a selfie with the drummers.
“All my life I’ve been wondering who I’m supposed to be,” Mobley crooned to an audience trying to get as close to the stage as possible.
Playing through several more tunes, each one just as good as the last, Mobley enchanted the audience more and more as the show went on.

The show closed with a final audience participation. Mobley instructed the audience to sing along to the chorus of the final song: “All alone again, solo.”
On their first try, the audience all but butchered the line and Mobley told them he cannot let them do that to his song. They tried again and the show continued with the final explosive number.
Mobley’s next project is something he is calling “POST-,” which he described as dystopian speculative fiction that imagines a near-future United States following marginalized resistance fighters. The project will include not only a long EP, but also a short film and a book.
Although a bit different than his last project, Mobley said his goals are still the same.
“I hope people enjoy it and I hope it provokes thought and provokes inspiration. I don’t have any real particular goals,” Mobley said. “I think my job is to put it out there and the meaning gets made when other people pick it up and determine what it means to them.”
Delete Image
Align Left
Align Center
Align Right
Align Left
Align Center
Delete Heading