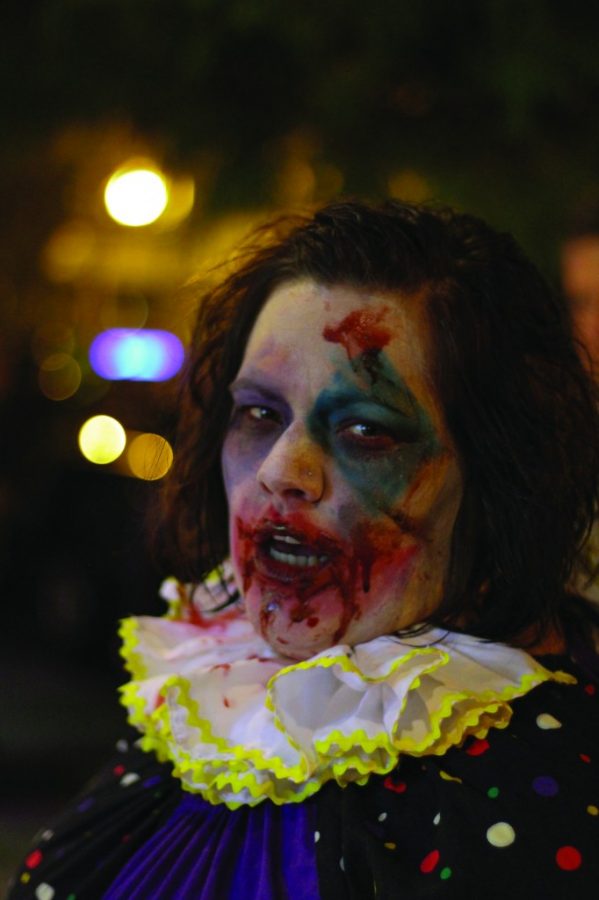 Angie Hollifield has lived in Asheville for 35 years and brought her kids to the Zombie Pub Crawl, on Sunday, Oct. 14, 2012.


Fake blood and beer are two popular ingredients for a Zombie Pub Crawl, especially when it takes place in downtown Asheville.
“The event is designed to be a good time,” said Sarah Giavedoni, the volunteer coordinator for the Zombie Pub Crawl. “Participants have the fun of dressing up and coming together with hoards of undead brethren.”
The 2012 Ashtoberfest Zombie Pub Crawl began at the ZaPow! gallery for the pre-party, and the undead proceeded to crawl throughout downtown to various participating bars to show off their festive and realistic make-up to unsuspecting tourists.
“It was hilarious to see the different reactions from people who had no idea what was going on,” said Neil DuBois, a nursing student at Asheville-Buncombe Technical Community College and zombie participant. “People got really into the costumes, and it was fun to be a zombie for a night.”
The make-up artist at ZaPow! transformed participants into zombies by utilizing a liberal amount of fake blood and creating the illusion of hollowed-out eyes with harsh black and white make-up.
“I started the night at ZaPow! where I mingled with a lot of other zombies and looked at great art. Then I went to Thirsty Monk, the Vault and the LAB,” DuBois said. “Walking like a zombie through the Asheville streets was fun because most tourists were shocked but seemed to really enjoy the spectacle.”
Two Asheville natives were sipping their drinks at the LAB and taking pictures of the undead as they passed by their seats conveniently located near the Lexington Avenue sidewalk.
One of these women, Kristen Fellows, explained how the 2008 Zombie Pub Crawl took place while vice presidential candidate Sarah Palin was in town.
About 100 zombies made their way toward the U.S. Cellular Center, which freaked out the secret service, Fellows said.
Not all cities would be as receptive to an event such as the Zombie Pub Crawl, but Asheville and the Asheville community are nowhere near traditional.
“In my experience, Asheville is one of the best places in the country for like-minded people to come together and put together untraditional organizations,” Giavedoni said. “We have a culture here that promotes creativity, originality and fun ideas.”
During a previous Zombie Pub Crawl, a tourist family moved to the other side of the street when a zombie clan approached, Fellows said.
ZaPow! and Spellbound Children’s Bookshop hosted this year’s Zombie Pub Crawl, and participating venues included the LAB, the Vault and the Bier Garden, as well as other establishments.
Despite rumors earlier in the year about the crawl being canceled, about 75 people participated in this year’s event, as well as local businesses and organizations who helped facilitate the 2012 Zombie Pub Crawl.
Ashtoberfest events are free to the public, and they are organized and run by community members, Giavedoni said. There are no boards or businesses running the events.
“The Ashtoberfest Zombie Walk started as a simple idea with a few people behind it,” Giavedoni said. “In the past six years, it has grown into an event that thousands of people – young, old, families, couples – come out and enjoy.”
Delete Image
Align Left
Align Center
Align Right
Align Left
Align Center
Delete Heading