UNCA soccer senior shines on and off the field 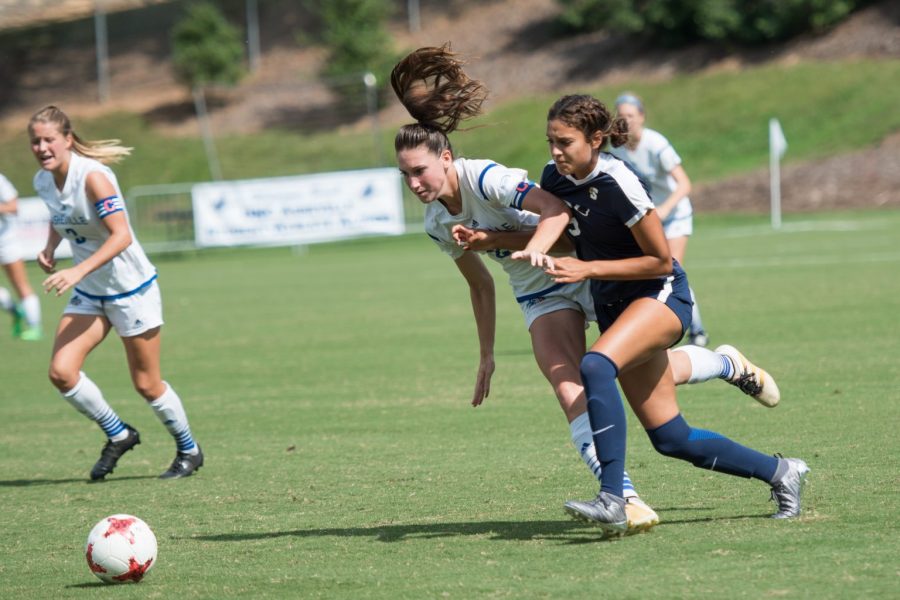 This fall Katie Tuorto began her senior year at UNC Asheville, along with her fourth season on the Bulldogs women’s soccer team. A starting player since her freshman year, last year Tuorto held the team best of 1,695 minutes of play in her defensive position. She started all 20 matches for the Bulldogs last season.


Originally from Kings Park, New York, Tuorto grew up in the Long Island suburb playing soccer. A business and psychology student, Tuorto said she plans to graduate this spring.
Tuorto knew after high school she wanted a change of scenery and pace. This desire led her to Asheville. Tuorto traveled to North Carolina previously for tournaments and enjoyed it. This enabled her to narrow her search for colleges down.
“Growing up I always knew I wanted to go out of state for school because I wanted to go get an experience,” Tuorto said. “We would travel to North Carolina a lot for tournaments and I decided it seemed like a really cool place to come.”
Since moving to Asheville, Tuorto said her favorite thing is the accessibility to nature and the peace it provides her.
“Long Island is pretty flat, so being a 45 minute drive from a 360 degree mountain view or a huge waterfall is really nice to have,” Tuorto said. “I have the beach on Long Island but it’s not the mountains. It’s so beautiful and it’s really chill.”
Recruitment of college athletes can happen a variety of ways, but for Tuorto the answer lies in choosing the right tournaments to play in and directly contacting the coaches she wanted to come watch her. Tuorto was recruited by Head Coach Michelle Demko after she attended a showcase tournament at the player’s request.
“Upon watching her play I liked her abilities in the center defender role,” Demko said. “She was a smart player who led by example on the field with her consistent play.”
After joining the team her freshman year, Tuorto formed strong relationships with her coaches and teammates and eventually earned the honor of being one of two team captains.
“There is a great trust relationship between Katie and our coaching staff,” Demko said. “Being a captain, she has the pulse of our team and often communicates with us how team morale is doing or how players are feeling during different points during the season.”
Assistant Coach Kyle Stewart said the center defender position Tuorto plays on the field requires a great deal of trust from her coaches and teammates.
“She is the second to last defender on the field at times, you see her and you trust her,” Stewart said. “You know she’s going to be there and she’s going to defend and she’s going to give 110 percent every play. That’s something that’s really valuable to have in a team, to have that trust in someone.”
Demko and Stewart both said Tuorto has given a lot to the program over the last four years without growing complacent in her role. Her communication skills and the trust she has earned from her teammates and coaches helped Demko make the decision to give Tuorto one of the captain roles.
“She is a great leader for others,” Demko said. “She often brings the team together prior to training or certain exercises to make sure everyone is ready to focus and give their best effort. Her leadership skills made her an obvious selection for team captain this year.”
Both coaches Demko and Stewart said they have seen Tuorto’s comfort in her leadership position grow since she was first given the title and responsibilities of a captain.
“She’s really embraced the leadership role,” Stewart said. “I don’t think she thought at first that she was one, but as coaching staff we thought she was, and even her teammates thought the same.”
Tuorto said she feels the team is a close group of friends who all support one another, something she attributes to both how much time they spend together and their conscious efforts to work as a team.
“It’s genuine friendships and I think that’s really awesome and it’s helped us a lot with stuff,” Tuorto said. “I think it comes from us as players knowing the kind of team we want to have. The coaches definitely play a role in that as well, checking in on us and stuff but I think it definitely starts with the players and that’s the way it should be.”
Caroline Houser, a senior student majoring in management with a concentration in global business and finance, is also playing her fourth season on the team and she appreciates Tuorto’s work ethic and caring nature.
“Katie is such a calming presence on and off the field. Whenever you need to talk to her about anything, she is there for you,” Houser said. “She is one of the hardest workers I know and will give 100 percent to every drill in practice.”
After graduating Tuorto said she wants to work in marketing, a profession she feels her double majors would be well-suited toward. While Tuorto knows what job she would like to have after graduation, the matter of where she will reside still remains unknown.
“I really love the idea of coming from New York to Asheville and moving to a new city, not knowing anyone and then making it my home,” Tuorto said. “I feel like I really know Asheville now and I’ve enjoyed the process, so I would love if I could move to another city or another place and kind of repeat the process.”