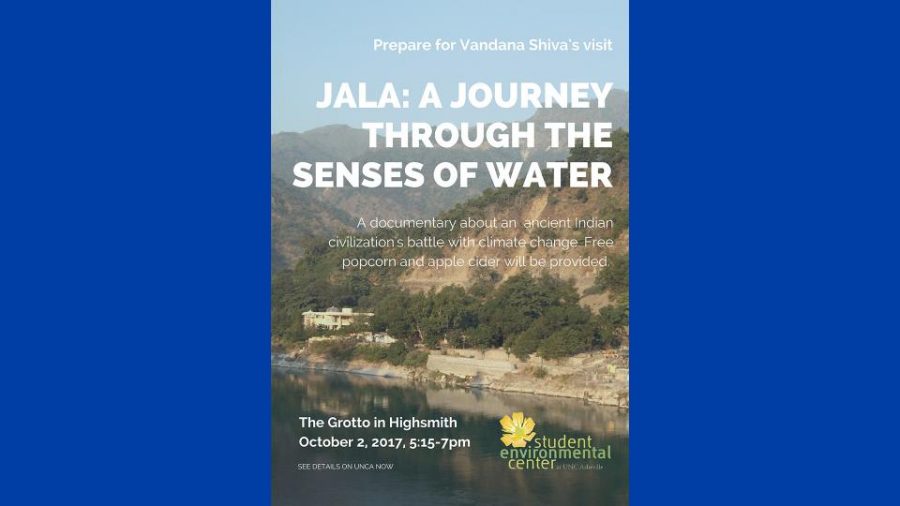 By Linda Cummins
[email protected]
Multimedia Staff
Colombian filmmaker Roberto Restrepo captured the holy Hindu bathing ritual called JALA in a documentary that was shown Oct. 2 in the Grotto. His film, JALA: A Journey Through The Sense of Water, recorded testimonies of those who revere and protect the Ganges River.
Followers of Hinduism believe that bathing in the water of the Ganges River will wash away their sins. The problem is, as one of the most polluted rivers in the world, bathers also risk catching typhoid, cholera and a host of other diseases.
Towns along the length of the 1,560 mile Indian river dump raw sewage directly into what they consider the Goddess Ganga. Despite this, more than eight million people descend upon cities lining the river each year for a single day. This holy pilgrimage is marked by street vendors hawking brass containers that devotees will fill with the filthy water, bringing them back to the vendors to solder shut for the trek home.
“I admire Restrepo’s approach to the topic. There is something sacred in the project: respect, contemplation, silence,” said Juan Sanchez-Martinez, assistant professor of Spanish.
Sanchez-Martinez said he felt like the director had brought the Ganges River into the protagonist’s role. Lorrie Jayne, assistant Spanish professor, said the film depicts an awe and care for the Ganges River and the humanity that lives from her.
“There is an intrinsic value in watching a film such as this, to simply experience the artistic dedication that filmmakers such as Restrepo express,” Jayne said.
“The camera and music are spectacular. Colors and strings synchronize and we enter another space,” Sanchez-Martinez said.
Lee Fussell, senior Spanish student, said the Ganges is the most sacred river of all. 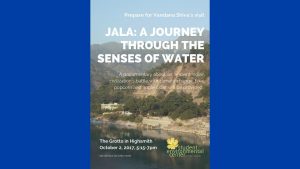 “How are we going to deal with one billion people disbursing into one area if the river becomes unusable due to overwhelming pollution? There is no cheating God,” said Fussell.
As throngs of Hindus snaked from the marketplace to the water’s edge guided by police officers with loudspeakers and whistles, some sang a devotional hymn to the Ganga. For a moment in time, the viewers became part of the crowd.
Jayne said JALA enables us to be inspired and to begin to be aware of the global and culturally interrelated nature of environmental problems, solutions and resolutions that can guide mutual action.
A Hindu priest’s interview intercut throughout the film enlightened the viewers on the river’s significance.
“She is the Almighty descended on this earth in the form of moving water,” the priest said.
For such an important river to be so endangered raises concern for  Professor Vandana Shiva, world-renowned environmental activist and author who will visit UNC Asheville this semester.
Shiva said pollution is a major threat to the continuing existence of the Ganges. Until the invention and widespread use of plastics, India had no notion of waste or trash. Much of the household items were produced straight from the Ganges river clay. Now the major cities resemble a dump, with trash merely pushed to one side, seemingly never dealt with.
“If the Ganges ceases to be, close to one billion people wouldn’t be able to live or to make a living,” Shiva said.
More than 500 million people live along the banks of the Ganges River, according to the World Bank Group. It is one of the top ten most polluted rivers in the world.
“Change is inevitable; will the inevitable be the destruction of a civilization or the destruction of values and mores that led to the current situation?” Jayne said.
In a study published in December of 2015, the World Bank disclosed over 40 percent of India depends on the Ganga Basin for drinking water, irrigation and ecosystem services. The basin is home to 140 fish species, two biosphere reserves and five endangered species, including the Bengal tiger.
“We start to kill the cycles of life when we kill the cycle of water,” Shiva said.
More than 700 industries guilty of grossly polluting the Ganges populate its main artery. According to the World Bank Group, it will take more than eight years and $1 billion to clean up the environment.
Dr. Shiva’s appearance in Restrepo’s documentary is just a small portion of her life’s work.
“Her message is strong and clear: dams, pollution and global warming are disrupting the Ganges River cycle,” Sanchez-Martinez said.
Shiva’s environmental impact led Time to identify her as an environmental hero and Forbes naming her as one of the seven most powerful women on the globe. Shiva has taught and spoken at universities worldwide.
She will visit Dr. Juan Sanchez Martinez and Dr. Britt Lundgren’s class, “Indigenous Perspectives on the Sky,” on Oct. 18 at 2 p.m. in the Humanities Lecture Hall.
As part of Shiva’s three-day visit to UNCA, she will be giving a free public lecture, Seeds of Hope, Seeds of Resilience: How Biodiversity and Agroecology Address Hunger and Climate Change, at 7 p.m. on Oct. 18 in Lipinsky Auditorium.