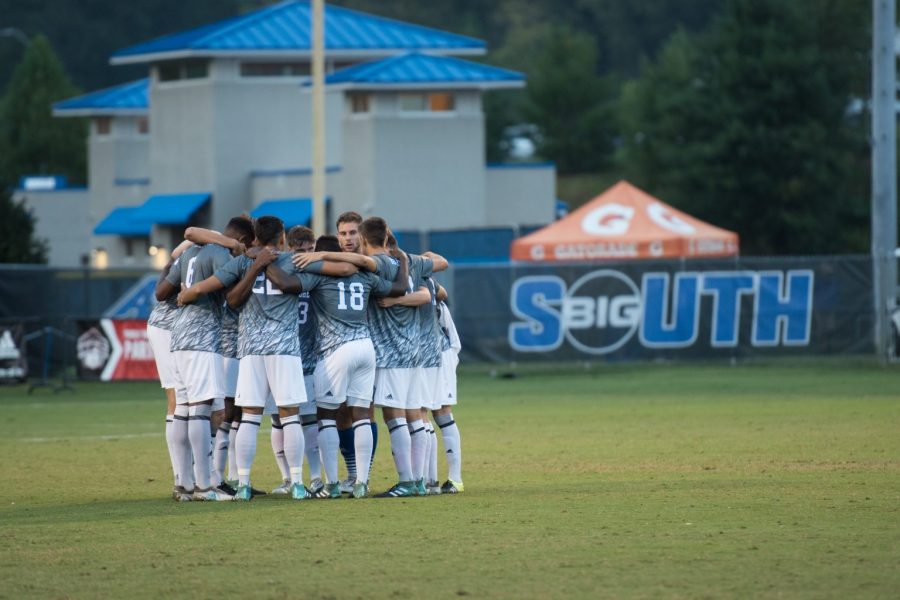 Student athletes at UNC Asheville are have a higher overall GPA than the regular student body.
According to the UNCA Athletics Department, 77 percent of student athletes earned a GPA of 3.0 or higher, with 21 of the 211 athletes earning a 4.0 during the spring 2017 semester.
At the close of the spring semester, athletes held an overall cumulative GPA of 3.3, reported the department.
Athletics Director Janet Cone said student athletes have a higher overall GPA and graduation rate than the UNCA student body as a whole.
“I attribute some of that to the fact that student athletes are motivated academically, much like they are athletically,” Cone said. “They want to do good.”
Along with UNCA, other universities in the Big South Conference report their student athletes perform well academically. According to the Winthrop University Department of Athletics, at the end of the spring 2017 semester, student athletes at the university held a cumulative GPA of 3.2, just one-tenth of a point shy of UNCA athletes.
Winthrop has 16 athletic teams comprised of 286 athletes. According to the department of athletics, the graduation rate for student athletes is 86 percent.
At Gardner-Webb University, another Big South Conference school, 60 percent of the university’s 470 athletes had a GPA of 3.0 or higher. The overall GPA of student athletes at the end of the spring semester was 3.4, said Vice President for Athletics Chuck Burch.
At 63 percent, the graduation rate for student athletes at Gardner-Webb is 12 percent higher than the overall student body, Burch said.
“Gardner-Webb, like so many of our Big South Conference colleagues, has unique qualities that set us apart,” Burch said. “As a Christian university in a rural setting, it is important for our coaches to recruit prospective student athletes that have the potential to not only fit into this environment, but to thrive. When we are successful, that’s when we can accomplish our goals.”
Burch said student athletes are expected to work hard in both athletics and academics. While there is not a minimum GPA requirement to remain on one of Gardner-Webb’s 22 intercollegiate teams, athletes must be working toward graduation and stay active on their teams to succeed.
Athletes’ academic performance and higher grades are not the result of lowered standards, Cone said. The athletes who the department recruits meet all the academic requirements of any other student admitted to UNCA.
Rebecca Nelms, assistant director for student athlete success, said she personally works with all the student athletes at UNCA. Both the athletes and athletics department take academics very seriously.
“The majority of the students are here because they want a degree,” said Nelms, who has worked at the university for nearly 14 years.
In addition to earning high GPAs, the majors which athletes choose are on par with the most popular majors at the school.
According to the athletics department, the three most common majors for student athletes are health and wellness, management and biology. The two most popular minors among athletes are neuroscience and biology.
Nelms said coaches must be flexible when it comes to scheduling practices around athletes’ varying majors and commitments.
Her position involves working with athletes to make sure their practice times and class schedules work together, Nelms said, so the athletes can balance both athletics and academics.
“Everyone agrees that the goal is to have the student graduate in four years,” Nelms said. “So no one, not the student, not the coach, not me, want to see that postponed to make a practice. That’s not logical.”
The athletics department focuses on supporting athletes both athletically and academically, Cone said. The department aims to help student athletes make the journey from wearing a backpack to carrying a briefcase.
Cone said even when things go wrong, it is not about winning or losing.
“It’s winning and learning,” Cone said. “What did you learn from that? It’s not about you lost or you’re a failure. It’s what did you learn that you could possibly do different or better the next time. I think that’s a healthy perspective to have. Sometimes you have your best lessons from the things that were challenging to you.”
The drive in student athletes is always to do better, Cone said. The competitive nature of athletics promotes improvement.
“We talk about being champions in athletics and leaders in life,” Cone said. “The champions in athletics is their competition, but the leaders in life is academics, community service, giving back, following your passion.”