UNCA embarks on a theatrical journey into fantasy 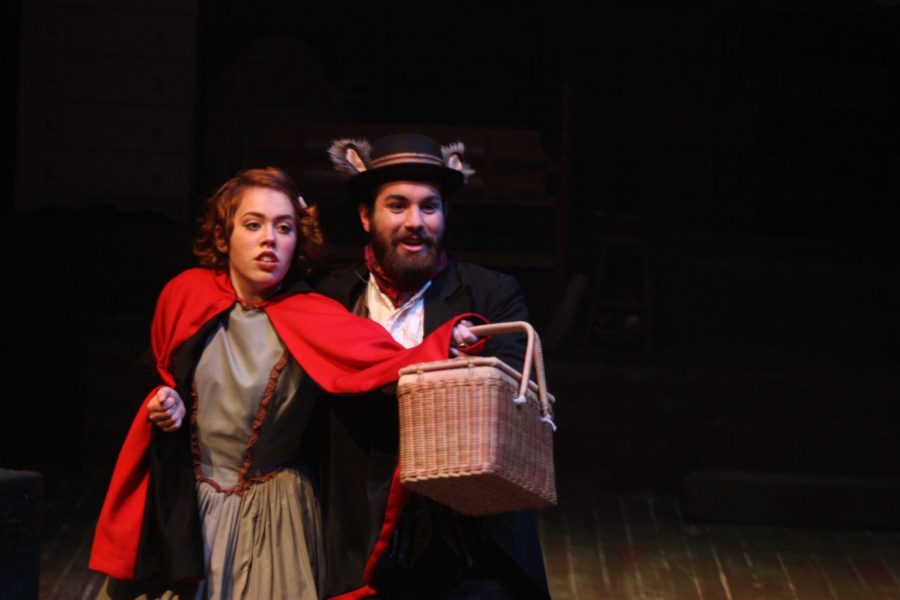 Emma Shock
A&F Staff Writer
[email protected]
Audience members fill the seats encircling the floor decorated with antique trunks and the promise of adventure, preparing to travel through the woods with the characters from their childhood fairy tales.
TheatreUNCA began the mainstage season on Nov. 2 with Stephen Sondheim and James Lapine’s Into the Woods, a musical chronicling the joys and consequences of fulfilling dreams through interweaving stories of classic fairy tale characters.
Melanie Heying, lab manager for the chemistry department at UNC Asheville, attended the show’s first performance. She said she saw productions of Into the Woods before, but never in a round setting like Belk Theatre, which created a feeling of being a part of the show.


“I was just incredibly impressed by the singing and the music,” Heying said. “I loved the way that they used the attic and things you would find in an attic as all the props and so I really enjoyed it.”
Connor Harmsworth, a junior drama major, said as props master and designer for the show, they enjoyed making and gathering props to create the antique setting of an attic to fit the aesthetic of the show.
Throughout the show, audience members can see the attic elements blending with the characters’ tales. Prince Charming uses a golf club as a sword, Cinderella visits a coat rack standing for the tree by her mother’s grave and Jack sells a suitcase representing his cow for magic beans.
Last semester, the season selection committee formed to choose plays to perform for every semester. Harmsworth said they joined the committee when it started and helped make the decision to stage Into the Woods.
“I actually had never read or seen the show before starting this, which I kind of prefer, because when you start working with the show, you get to learn more things about it than you would if you just read or saw it elsewhere,” Harmsworth said.
Scott Walters, professor of drama at UNCA, said the committee comprised of students and faculty members decided which productions to perform for the season in April.
After deciding on Into the Woods, Walters said a student suggested giving the whole season a theme. Audiences will first travel into the woods, then the plays in the spring semester will take them back into the light.
Walters said the other fall performance featured is The Sunset Limited and the spring performances will feature Welcome Home, Jenny Sutter and This Girl Laughs, This Girl Cries, This Girl Does Nothing.
Walters first saw a production of  Into the Woods at Illinois State University, where his stepson played the Wolf. At the time, he said the performance did not grab him when he saw it.
“The students on the selection committee really wanted to do it and they wanted me to direct it,” Walters said. “At first, I thought, ‘Oh god, it’s such a major project.’ But then, I started listening to the cast albums of the Broadway productions and I fell in love with it.”
Walters said the production showcases many complex elements, including more than 275 light cues alone.
“The music is very, very difficult and I was worried that we wouldn’t have enough strong voices to be able to do the show and at the same time act it,” Walters said. “But I was totally wrong. This cast is amazing.”

The show features a mixture of drama students, music students and a few students from other departments who love Into the Woods and decided to audition, Walters said. While productions normally only include students, faculty and staff, two young girls from the community also joined the cast.
Walters said the cast’s talent and effort gave him confidence about the strength of the production, especially with the show’s final 20 minutes. He enjoyed trying to make the scenes resonate emotionally with the audience.
“I really think this play has important things to say about pain and forgiveness and how parents can make terrible mistakes out of love and fear,” Walters said. “It’s a bittersweet play and I hope that the audience will leave having enjoyed themselves and also perhaps learn to look more kindly on those who have hurt them and forgive themselves for those they have hurt.”
The cast will give four more performances of the show, including evening performances starting at 7:30 p.m. on Nov. 16-18 and a matinee at 2 p.m. on Nov. 19 in Belk Theatre.
Delete Image
Align Left
Align Center
Align Right
Align Left
Align Center
Delete Heading