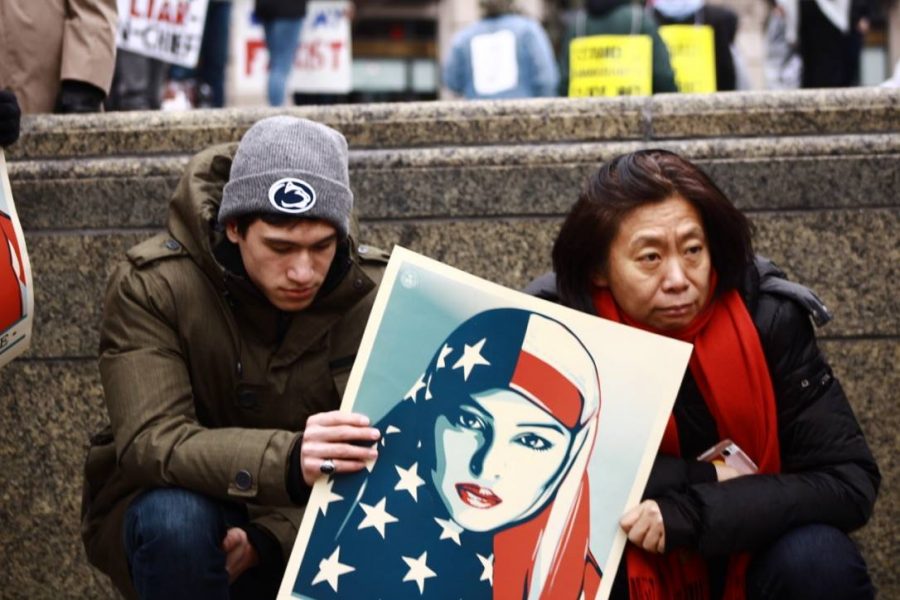 Larisa Karr
Managing Editor
[email protected]
Indra Acharya was in a Lyft on his way home from brunch when his driver began ranting about how the United States is bringing in refugees and unnecessarily ‘feeding them all their life.’
Little did his driver know he was talking to a former refugee.
Acharya, who was born in a refugee camp in Nepal after his parents were forced out of Bhutan, believes that a lack of understanding facilitates these hostile sentiments.
“There’s a negative kind of image of refugees as opposed to really trying to understand why they become refugees in the first place,” Acharya said.
In 2016, 65.6 million people were forcibly displaced worldwide, according to the United Nations High Commissioner for Refugees.
Of those 65.6 million people, 22.5 million were refugees. This number, according to the UNHCR “Global Trends: Forced Displacement in 2016” report, is at an all-time high.
Giulia McPherson is the Director of Advocacy and Operations at Jesuit Refugee Service/USA, an organization that helps refugees with education, social and health issues in 47 countries.
“We are seeing record levels of displacement around the world and so that work is really critical right now because of those numbers,” McPherson said.
The number of refugees being able to return to their home countries has plunged dramatically from 25 percent in 1994 to a little more than 5 percent last year, according to the UNHCR report.
This is due to an increase in the number of conflicts throughout the world, McPherson said.
“We unfortunately aren’t seeing a sustainable solution for the current refugee crisis,” McPherson said. “The numbers will continue to increase because so many of these conflicts are dragging on for years and years.”
Several conflicts, particularly those in Central and South America, can be attributed to the United States.
“The political history of Nicaragua, El Salvador and Honduras is entirely intertwined with the United States, with various conflicts that the United States government has helped to support, either by training soldiers or sending money back in the ‘80s,” said Natalie Teague, an immigration attorney in Asheville.
Because of the political instability in these countries, Teague said, they are now controlled by gangs, which have instilled a sense of fear in the population.
“They’ve seen people shot in the street and seen a gang come and burn a business to the ground. They’ve seen family members taken captive by gangs,” Teague said. “I’ve worked with women that have talked about the gang coming to the front door and telling their kids to run out the back door and literally go north and don’t stop until you get there.”
Many of them, however, end up in unsafe surrounding countries, which is common when refugees flee conflicts in their native land.
Eighty-four percent of refugees are hosted in developing countries under UNHCR’s mandate.
Regardless of where they are, a state of constant fear is common amongst refugees and other displaced persons, including Acharya.
“When I was in a refugee camp, it was a constant fear of death. It’s a constant fear of survival. It’s a constant fear of your own existence,” said Acharya, who is currently studying government at Georgetown University.
In the camp, Acharya said, it was common to see people dying everyday, with many people dying because of malnutrition, communicable disease or even attacks from local Nepalese people who thought refugees were “illegally occupying the land.”
Being surrounded by death was also a reality for Walter Ziffer, a 90-year-old Holocaust survivor who was in seven concentration camps before being liberated at the end of the Second World War.


“The outcome for inmates was planned to be the same in all those camps,” Ziffer said. “We were supposed to die and some of us were supposed to die after having exhausted ourselves and having given to the German Reich all of our strength by having worked for them by building the autobahn.”
Ziffer said that he notices some parallels now between the political climate of his youth and recent global events, including white nationalist rallies in Charlottesville, the election of the far-right political party Alternative for Germany and neo-Nazi marches in Sweden.
He said he was recently having a conversation with an individual who said his family was wondering where they can go when things for the Jews get worse in this country.
“I was stunned to hear that saying because that is the very saying that people said in Europe before Hitler came to power,” Ziffer said.
This far-right shift in attitudes, Ziffer said, is because people view those they are not familiar with as ‘the other.’
“When you become an object, when you no longer are a subject, you become an object that you can do with whatever you want to,” Ziffer said. “You step on a roach and it’s just like stepping on and having no respect for the ‘other.’”
Acharya also speaks about the complex of the ‘other’ and how prevalent it is in American society.
“The U.S. has an attitude of being afraid of others, whoever it is, throughout history and we tend to create the image of others in a way that benefits us,” Acharya said. “There is this preconceived notion that they’re terrorists, they’re welfare leeches that don’t work hard, they’re dirty, they’re filthy.”
For Acharya, this attitude of fear is because there is a lack of education and communication with people from other backgrounds.
“The lack of understanding and lack of interaction with many folks contribute to the preconceived images and notions, stereotypes, that exist,” Acharya said.
Not talking to people like individuals was common in the refugee camp.
“If you’re a kid and you’re killed, which happened to many of the people that I knew, it’s like they don’t even talk to you as a human being,” Acharya said. “It’s not ‘Person A’ who died, it’s one of the refugees who died. You’re just a number.”
Ziffer knows this feeling as well.
“I lost my name,” Ziffer said. “64,757 was my number.”
Delete Image
Align Left
Align Center
Align Right
Align Left
Align Center
Delete Heading