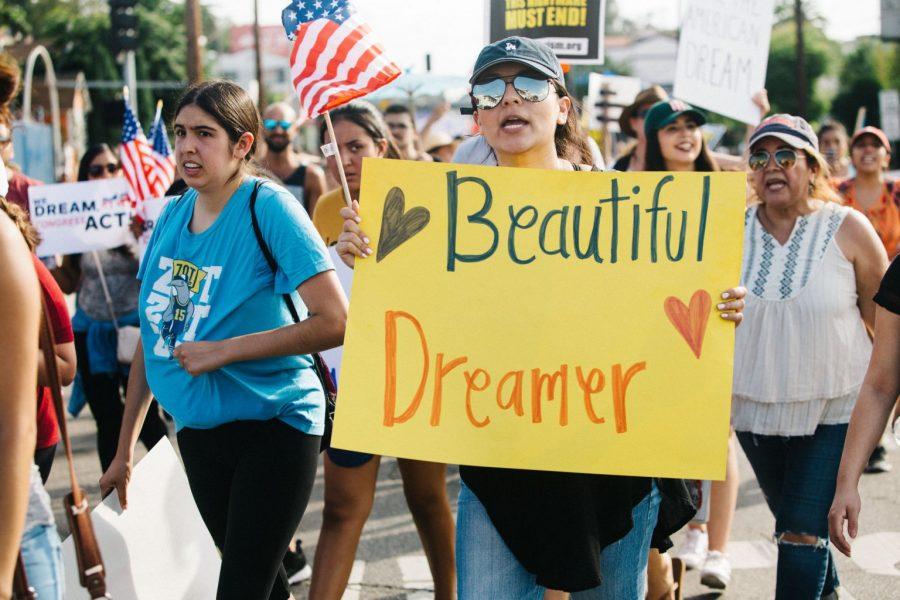 Protestors at a march for immigration rights call for the decriminalization of undocumented peoples. Photo courtesy of Molly Adams.

By Karrigan Monk
Arts & features Editor
[email protected]
President Donald Trump promised to deal with DACA with heart.
He made this promise in response to a reporter’s question at a White House press conference in February.
A month earlier he told ABC News that Dreamers, recipients of Deferred Action for Childhood Arrivals, had nothing to worry about.
By June, the United States Department of Homeland Security announced the Trump administration would be working to repeal the program and on Sept. 5, Attorney General Jeff Sessions announced the official repeal of DACA.
Trump’s administration gave a six month window of opportunity for recipients with soon-to-be expired documents to have them renewed, but at the end of the six months deportation of DACA-qualified individuals would begin.


According to Sarah Gillooly, policy director at the North Carolina American Civil Liberties Union, at the time of rescission, nearly 800,000 immigrants were enrolled in the DACA program and 27,000 lived in North Carolina.
“What this means for not just those young people, but the young people and their families who they are supporting emotionally and financially, is that they are looking at the expiration of their work permits,” Gillooly said. “These people are losing their ability to work and financially support themselves and their families. They’ll be losing their ability to attend school and also face increased risk of deportation, whereas under DACA they had been promised they would not be priority for deportation.”
While Obama’s administration prioritized the deportation of undocumented people who had committed certain crimes, Trump’s administration does not note the difference and makes plans to deport all undocumented individuals.
Because Trump no longer prioritizes the deportation of criminals, Gillooly said she has seen a decrease in undocumented individuals willing to report crime because they fear they will be punished with deportation despite trying to shed light on other, more violent crimes than existing in a country illegally.
Lt. Joe Silberman of the Asheville Police Department said neither he nor the police department keep any information regarding a person’s immigration status and they make no effort to seek it out when dealing with a crime that person may have been involved in either as a victim or perpetrator.
“They’re worried about getting in trouble. We’ve done a lot of programming to try to bring them into the fold,” Silberman said. “There’s nothing we do with or deal with a person’s immigration status as a police department.”
Silberman said a big part of getting cooperation from undocumented individuals is making sure these people know the police department only wants justice and are not concerned with a person’s immigration status.
Part of ensuring this trust comes with granting U Visas to those who have information regarding a crime and are willing to help law enforcement in prosecution. Silberman said there are very few instances when he will not grant a U Visa for someone, as he believes putting criminals behind bars should come before immigration status.
“I think our immigration policy inherently has some deep flaws in it, but I don’t know what as a country we could do on a constant basis to prove a person’s immigration status,” Silberman said. “I don’t know how helpful that would be to anybody in the long run, law enforcement included.”
Mark Gibney, Carol G. Belk distinguished professor in humanities and professor of political science at UNC Asheville, said while APD and the people of Asheville have historically been friendly and welcoming toward immigrants, the same does not appear to be true for the majority of Americans.
“The American public has never been enthralled with immigration and immigrants unless, of course, it personally affects them,” Gibney said. “I don’t think his policies have changed many minds, which generally tend to be restrictive in nature.”
Gibney said while he was disappointed in the repeal of DACA, he was not surprised, as much of Trump’s campaign created the narrative that immigrants are criminals and are taking jobs away from the American people.
Ashley Moraguez, assistant professor of political science, said Trump has a long and complicated history with race relations.
Starting in the 1970s, Trump reportedly discriminated against minority renters and was repeatedly charged with violating the Fair Housing Act. This trend and more charges continued through the ‘90s.
Moraguez said Trump was one of the leading voices in demanding Obama present his birth certificate to prove he was an American citizen. She said on the campaign trail he continued with similarly racially-loaded rhetoric while still claiming he was not racist.
“Trump is infamous for his stances on immigration policy or at least the rhetoric he uses to discuss issues of immigration,” Moraguez said. “On the campaign trail he promised to build a wall along the Mexican border and have Mexico pay for it. I think the wall proposal was a popular one for Trump but now that the reality of the U.S. having to pay for the wall has set in, I think he has lost support among his constituents and definitely among his fellow partisans in Congress.”
Gillooly said Trump may have lost some support with the promise of his wall waning, but he still has other ideas that could prove dangerous.
“Certainly many of the marginalized communities with which we work feel a new sense of physical fear,” Gillooly said. “What does it mean to live in a political moment in which your president is using rhetoric of white supremacy in order to support his policies of immigration? It is certainly alarming and creates a culture of betrayal.”
Despite this fear, Gillooly said the ACLU will continue to fight against these policies in order to secure human rights for everyone living in the country.
Gillooly said while DACA is a crisis manufactured by the Trump administration, Congress has the power to solve it and the ACLU’s first step of action will be to ask Congress for a permanent solution while mobilizing their supporters for help.
“We of course will encourage DACA recipients who are facing termination of their current status or deportation without cause to reach out to the ACLU so that we can advise these people of their rights,” Gillooly said. “As long as DACA remains the law of the land, current recipients have rights. In fact, all people have rights, including undocumented people.”
Delete Image
Align Left
Align Center
Align Right
Align Left
Align Center
Delete Heading