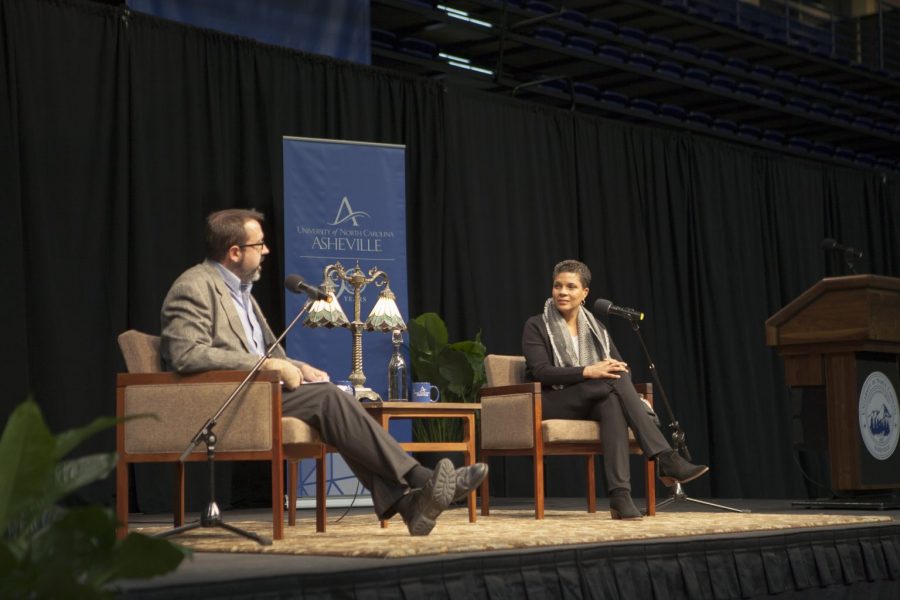 By Maggie Haddock
News Editor
[email protected]
Author Michelle Alexander spoke to UNC Asheville and the Asheville community on Jan. 18 regarding the issues surrounding mass incarceration and racial injustice, which she discusses in her book, The New Jim Crow: Mass Incarceration in the Age of Colorblindness. Her  book continues to spark controversy in U.S. prison systems, particularly in North Carolina which is one of the nine states contributing to the highest juvenile life sentencing without parole.
“Certainly when it comes to mass incarceration and the challenges we face, being the most punitive nation in the world, a nation that advertises itself as the ‘land of the free,’ and yet has the highest rate of incarceration in the world, and denies millions of its own citizens the right to vote,” Alexander said.
Alexander noted her perception of these issues has shifted through the years from a political standpoint to a more theological standpoint.
“I myself have moved in recent years from thinking of our criminal injustice system and system of mass incarceration primarily as a political and legal problem, to now viewing it primarily as a profound moral and spiritual crisis that faces our nation,” Alexander said. “That is why I chose to leave the practice of law and being a law professor, to spend some time in a seminary, a theological seminary that has been at the forefront of many social justice movement over the years.”
These theological notions tie into Alexander’s argument of the evolution of civil rights groups, which, opposite of her personal change in perception, shifted from the theological standpoint, to the more political standpoint. She noted the importance of late 20th century civil rights groups, but argues the progression of those groups was cut short after the assassination of Martin Luther King, Jr.
“Years after Dr. King passed, I think what we saw is the professionalization of civil rights advocacy. What was once a radical, grassroots movement that was focused on organizing poor people and people of color, certainly the sanitation workers strike in 1968, the organizing that was going into economic justice and not just racial justice, demanding fair wages, the right to work for a living wage, the right to shelter, the right to education — not just desegregation, but quality education,” Alexander said. “What was really a radical, democratic-socialist vision for what truly multi-racial, multi-ethnicity egalitarian democracy ought to be, was under way. There was a movement that was emerging in those years, and was cut short.”
Alexander discussed the complacency the general U.S. population embodies regarding racial injustice and mass incarceration. She argued Hollywood, and shows such as Law & Order, leads a majority of the unaffected population to believe a lawyer will fight for the accused the moment they are arrested, which often is not the case.
“Our criminal justice system has become so normalized that those of us who have grown up watching Law & Order and have gotten accustomed to the images we receive from Hollywood, we’ve grown accustomed to the messages we hear from politicians, we’ve become used to living in a nation where it’s normal for 1 out of 3 African-American men to accept to do time in prison. Where it’s normal for police to stop people without any evidence of reasonable suspicion or probable cause and frisk them and throw them to the ground simply for talking back to the police officer and expect them to just shake that off and go about their day.”
The Prison Policy Initiative reports black Americans make up only 13% of the U.S. population, but make up 40% of the inmates in U.S. prisons. White Americans, who make up 64% of the population make up only 39% of inmates in U.S. prisons. Additionally, black Americans are five times as likely to be jailed as white Americans, according to a 2016 report by The Sentencing Project.
Patrick Bahls, director of UNCA’s honors program and associate professor of mathematics, said Alexander’s work is integral to his life and has become a core part of his senior capstone course.
“Professor Alexander’s work has had immeasurable impact on my thinking, my teaching and interactions with others, both professionally and personally,” Bahls said. “This spring semester marks the fifth term in which I will share Professor Alexander’s work with my students in my capstone course, Cultivating Global Citizenship, and every single one of those terms from the same, dog-eared copy of this book I continue to carry.”
Alexander’s work and those like it have influenced younger generations to take action. Brooke Wages, 27, is an ex-offender advocate who decided to go into social justice work and felt guided by the works of Alexander and others like her.
“I studied at North Carolina State University for mechanical engineering and in my junior year, I realized how incredibly broken our criminal justice system is and felt a calling and a pull to making a change. So, that’s completely different than what I planned on doing in the first place. Michelle Alexander’s book and other books by other influential authors have really guided me to pursuing this wholeheartedly,” Wages said. “Since then, I have decided to earn a Master’s in public policy and also an MBA at MIT to really pursue a social enterprise that places ex-offenders in highly-skilled trade roles.”


Alexander notes that younger generations are typically more receptive to injustices in criminal justice systems and are more likely to make a change since they are not accustomed to these injustices.
“In my experience, young people get these issues way quicker than the rest of us. You have a conversation with a young person about whether or not it is fair or just for someone to receive a sentence of life without parole for a first time, non-violent offence that they committed at the age of 18. It doesn’t take a lot of data or policy analysis for young people to say, ‘That’s wrong, that’s immoral. We ought to be doing something about that.’”
Alexander addressed the ban on her book, noting that her book has been excluded from prisons in particular.
“Banning books might help to enlighten people who are incarcerated about political, social and historical forces that got them and their communities locked up and that might help to point the way toward liberation work,” Alexander said. “New Jersey reversed it’s ban on my book after it was challenged by the ACLU. North Carolina, Florida, Michigan continue to ban my book. The texas prison system bans 10,000 books. In New York, there was a pilot program that was adopted about two week ago, that banned virtually all books except, as one commentator put it, ‘except sex novels and Bibles.’
The ban on Alexander’s book was reversed in North Carolina on Jan. 23 after objections from North Carolina’s American Civil Liberties Union affiliate. The book is still banned in states such as Florida and Michigan, which, like North Carolina, contribute to the nine states with the highest juvenile life sentencing without parole, according to 2016 data from the Prison Policy Initiative.
To Alexander, the call to action on these issues has been adopted by younger generations, and despite her belief that civil rights groups have become professionalized in more recent years, she has hope for movement such as Black Lives Matter and the young voices behind the movement and the unwillingness to accept mass incarceration and racial injustice.
“We’ve accepted that it’s just OK to treat certain groups of people as though they’re disposable and fortunately for young people, they’re not so accustomed to this and are less inclined, I think, to accept the status quo as inevitable,” Alexander said. “I think the movement of Black Lives is an excellent example of young people witnessing injustices on the street, and whether or not they had the opportunity to read a book like mine or others, understood that it is wrong.”
Delete Image
Align Left
Align Center
Align Right
Align Left
Align Center
Delete Heading