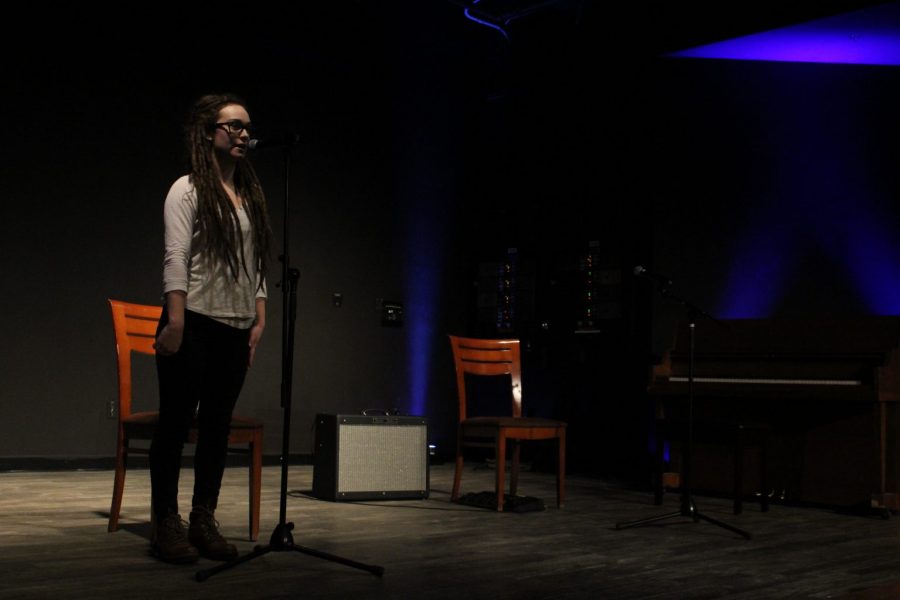 Taylor Sexton
A&F Staff Writer
[email protected]
The Highsmith Grotto’s only source of light was one lone beam aimed toward an empty stage that would soon be occupied by an artist — a slam poet.
Cate O’Connor, assistant director of weekend and evening programs for Highsmith Student Union, turned the usual open mic night into a poetry slam.
“Our office has heard some buzz about people who are interested in forming a poetry slam club or something like that,” O’Connor said. “We wanted to offer an opportunity to see who was interested in that sort of thing.”
The planning for poetry slam started at the end of last semester.


O’Connor said the eventual goal is to create a College Unions Poetry Slam Invitational team. CUPSI is a national and international competition which will take place at Temple University in Philadelphia, Pennsylvania, April 4 to 7. Here, poetry slam teams from across the country will compete for the top honor.
“Right now, if anyone is interested in joining the team, they can just come talk to me or email me,” O’Connor said.
Slam poetry incorporates emotion, art and sometimes even activism. It can be anything the performer wishes to draw attention to or address with the audience.
Gary Ettari, an associate professor of English has regularly taught an intro poetry class, said it combines poetry, spoken word and acting into one performance.
“We’ve all seen some pretty crap acting in our day and we’ve all seen some pretty amazing acting in our day,” Ettari said. “To me, it’s less about the subject and more about the genuineness behind it. I think you want the real and the emotional and the raw and the visceral and that goes for any kind of poetry.”
Ettari said slam poetry provides an opportunity to tell a story. The slam poet should engage the audience and pull them into their world. Their goal should be to get the audience right there with them, which lets the poet know they have done it right.
He said he thinks poetry creates a connection, a way for us to reach out to one another and unify us as humans, as a community.
Erin Yates, a junior environmental management student and slam poet, expressed her story through body language, such as hand motions and the volume and tone of her voice.
“The big difference between slam poetry and written poetry for me is how much emotion you can show through your expressions, or the tone of your voice or how loud or quiet you choose to be,” Yates said. “Some people will even start to sing or rap in the middle of their slams. You just get more sensory stimulation for your audience.”
Yates was one of the many performers who had chosen to take the stage for the opening poetry slam night. She admitted although this is not her first time doing slam poetry, it will always be a bit of a nerve wracking experience.
The next poetry slam will include special guest, slam poet FreeQuency.
FreeQuency, a 26-year-old Kenyan immigrant and queer woman, is a speaker and performer. She was ranked third at the 2015 Individual World Poetry Slam and was a 2017 TEDWomen speaker.
“When we saw FreeQuency perform, we felt that she would be a great person to bring to campus,” O’Connor said. “This is going to be different from anything we’ve really done on campus up until now.”
Students are encouraged to attend and will have the opportunity to speak with FreeQuency. The first half of the night will be the usual slam poetry combined with an open mic night for students, and the rest will be a performance by FreeQuency.
The next slam will be held in the Highsmith Grotto on Feb. 28 at 7 p.m.
Delete Image
Align Left
Align Center
Align Right
Align Left
Align Center
Delete Heading