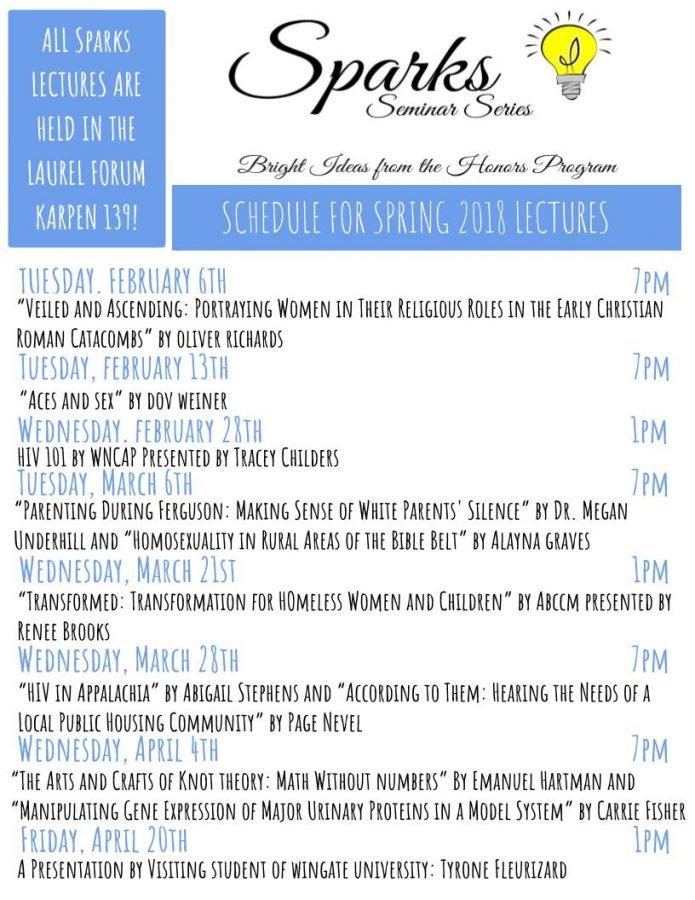 The Sparks seminars are now available to the entire campus community. Previously, the seminars were exclusively offered to students in the Honors Program. Schedule courtesy of the Honors Department.


The Sparks seminar series hosted its first speaker of the spring semester on Feb. 6, with an Honors student at UNC Asheville lecturing on the portrayal of women in their religious roles in the Early Christian Roman catacombs.
“Our organization is supposed to promote community within the Honors program and promote the Honors program as a community within the school, which is a lot of why we are now opening it up to the public,” said Emmanuel Hartman, president of the Student Honors Advisory Committee. “It was always intended to be like that, but it was never explicitly stated.”
Sparks coordinator Alexis Moon said she decided to invite the entire campus to the seminar series in order to be more inclusive of the student body.
“I think that it is an excellent opportunity for Honors students to share their research, but I feel like it shouldn’t be an exclusive experience to hear their research,” Moon said. “While there is an Honors benefit to be able to lecture, I feel like it shouldn’t actually be limited to be able to receive that information.”
Moon said some events include more than one speaker to allow as many students as possible to share their research.
Sparks was started by SHAC, a student organization within the Honors program. Hartman, a senior, said he founded Sparks during his sophomore year.
“SHAC began a couple of years ago, in the fall of 2015, when I appointed the first SHAC officers, handpicking students I knew I could count on to get the organization up and running,” said Patrick Bahls, director of the honors program. “Among the things they did that I view as above and beyond was to establish Sparks. I want to emphasize that this seminar series was entirely their idea, and it remains entirely student-organized and student-led and its impact on the university community is growing and growing as these students very ably guide it in its growth.”
Bahls’ involvement with SHAC and Sparks includes providing funding to support the series and help advertise the students’ work. He said his primary responsibilities include overseeing the development of the Honors program curriculum and assisting in the design and delivery of various extra- and co-curricular activities available to Honors students, as well as the recruitment of prospective Honors students.
“I was not to be disappointed. The initial group did amazing work planning social and academic opportunities for their peers, developing a mentoring program for new Honors students and establishing foundational documents like a set of by-laws and a constitution for the organization,” Bahls said.
Eleven lectures are scheduled this semester over the course of eight nights, making up over half of the program’s events, including seminars on homosexuality in rural areas of the Bible belt and transformation for homeless women and children.
“It had its rough patches early on where there were talks and no one showed up. It certainly had its points where no one was showing up, and only Honors students were here, but I think in a lot of our talks there has always been a couple of people in the audience from the general community,” Hartman said.
One way Sparks aims to expand its audience in the community is by being open to a variety of ideas, Hartman said.
“We wanted people to come and tell us what they’re interested in,” Hartman said. “People have given talks that are completely outside of their major. We had a really great talk last semester about Soundcloud rappers. It was just what the student was interested in.”
The next Sparks lecture is Feb. 13 on “Aces and Sex” at 7 p.m. and will be presented by Honors student Dov Weiner.
Delete Image
Align Left
Align Center
Align Right
Align Left
Align Center
Delete Heading