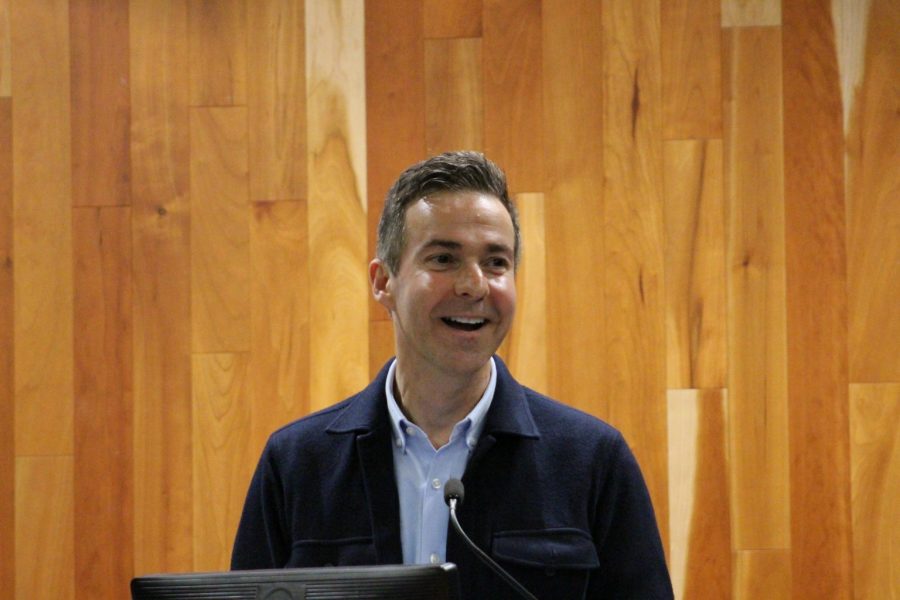 Karrigan Monk
Editor-in-Chief
[email protected]
As the audience mingles around the room looking for empty seats, a woman watches over them. She sits in a red dress with a cigarette hanging out of her mouth and a playing card in her right hand.
This woman’s name is Lili Elbe, the star of  tonight’s talk. The painting of her displayed on a screen was made by her wife, Gerda Wegener, in 1928.
David Ebershoff, author of The Danish Girl, tells their story. The novel, released in 2000, tells the fictionalized story of Elbe and her journey to be the first person to undergo sex reassignment surgery.

Ebershoff said the stories fans tell him of a similar nature are some of the ones that stick out to him the most.
Two stories in particular stuck out to Ebershoff.
The first comes from a trans woman in Europe who received The Danish Girl as a present from her then-wife. Though she was living as a man at the time, this woman saw herself in Elbe’s story and began the transitioning process.
Unfortunately, the transition did not go as smoothly as it could have and she was forced to start her life over in a different country. She was living happily, but Ebershoff said she wrote him to say she was still carrying some of the weight around with her.
It was only until she saw the film based on the book was she able to fully let go.
“She had kind of this double experience with the book and the movie,” Ebershoff said. “That was really powerful to think the story could come into her life at two different periods and really profoundly affect her.”
The second story Ebershoff mentioned came from another trans woman. This woman lived in what Ebershoff described as a very conservative U.S. state. He said he received a letter from the 72-year-old, but the name and return address was under a man’s name. Despite the fact this woman is well into her life, she is unable to transition and live as who she knows she is.
“For her to tell me that the book tells her story and she doesn’t live in Denmark, she lives in a very different environment, that really was one of the most moving things anyone has ever said to me about my writing,” Ebershoff said. “As different as Lili’s story is to this woman’s story, there was some emotional truth she felt truly represented her. It was an incredibly moving story. As a writer, as a creator, as an artist, as important as I think those questions are and as valid as they are, I tend to fall on judging the work.”
Ebershoff said one of the most rewarding things about his work is knowing he helped people like these two women. While this help is more distant and abstract, Ebershoff also does his part to help both the LGBTQ+ population and writers, a cross-section of a group he belongs to himself.
By partnering with the Lambda Literary Foundation, Ebershoff established the Lili Elbe Scholarship which sponsors one up-and-coming transgender writer to attend a two-week writing conference to help them hone their craft.
Ebershoff said he believes finding one’s identity is crucial to being able to live the best life possible. With the scholarship, Ebershoff is doing his part to help others accomplish this for themselves, but it all started with the story of one woman.
“Many of our self doubts and insecurities and anxieties are really about identity,” Ebershoff said. “If you know yourself you will come that much closer to being free. Almost a century ago a Danish woman — though she insisted on calling herself a girl — put her foot on a chair and posed for a portrait with a cigarette and a deck of cards. She shows us her best card, queen of hearts in the painting. She shows us her best self in the painting and she shows what it means to say it to the world.”
Delete Image
Align Left
Align Center
Align Right
Align Left
Align Center
Delete Heading