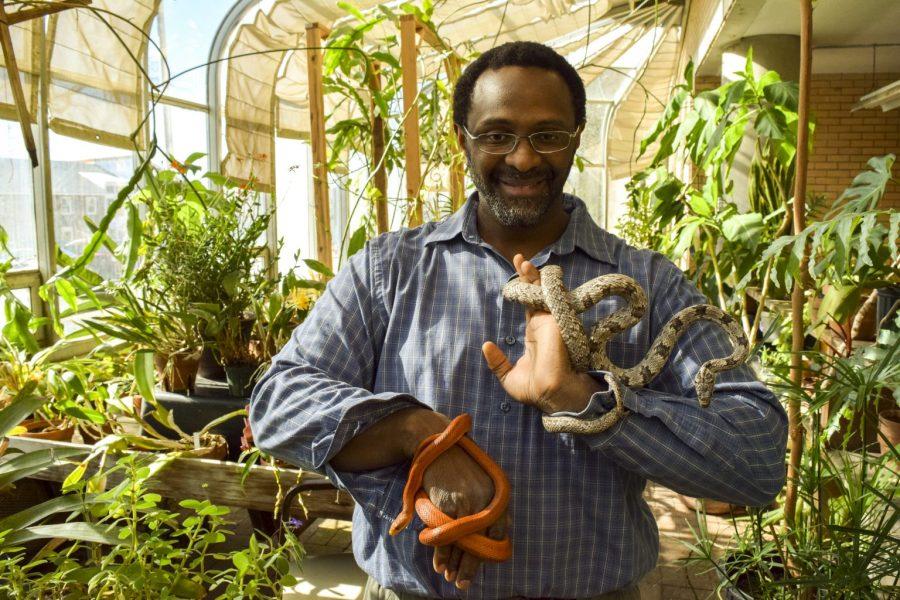 
“For me, the hardest part of this trip was that it had to end,” said former participant Henry Gates, senior ecology student. “If it were up to me, I’d still be on it, traveling and looking for reptiles.”
Environmental studies Instructor Landon Ward plans his fourth trip for this summer, and said it’s a process he thoroughly enjoys.
“Every time I teach that class we find more stuff. It’s amazing how every time I say, ‘Wow, that’s the best trip ever,’ the next trip beats it,” Ward said.
On the last trip, Ward and his group visited Alligator River National Wildlife Refuge. On their first day there, Ward said they encountered what he called the biggest bear he had ever seen.
“We were driving the roads looking for snakes and an enormous black bear lumbered into the road. It was so big and so cool looking,” Ward said.
Abigail Snow, senior ecology student, said she felt the trip overall covered many beautiful habitats and allowed the students to see a variety of different animals.
“I really loved getting to see an American crocodile. They’re very rare and to see one up close felt like I was witnessing an actual dinosaur,” Snow said.
Ward said he plans the trips strategically, so the students start the first few days on the Outer Banks, where it is beautiful and the weather is nice with very few bugs. Then they head south and camp at Okefenokee National Wildlife Refuge, Georgia, Apalachicola National Forest and Archbold Biological Station in Florida before arriving at Everglades National Park.
“By the time we get down to south Florida, we’ve kind of built up to the mosquitos and heat,” Ward said.
After Everglades National Park, the group heads to the Florida Keys where they can swim or snorkel.
“None of the hikes are hard. We stop and look at and catch a lot of stuff,” Ward said.
Midway through the trip, the group visits Apalachicola National Forest.
“We find snakes there that you can’t find anywhere else. It’s a very sandy habitat with Florida pine snakes,” Ward said.
One is a subspecies of the Kingsnake, the Brownchin racer, who makes its entire habitat within an approximately 30 mile radius, Ward said.
“Occasionally we see some venomous snakes on that part of the trip, copperheads, coral snakes, cottonmouths. But we’re super careful and follow protocols to keep everybody safe,” Ward said.
Snow said she appreciated the trip for allowing her to get out of her comfort zone without being totally alone.
“It’s a great introduction to field experience in a friendly environment with who I consider as one of the most caring and knowledgeable herpetologists out there,” Snow said.
At a stop near Orlando, students visited Reptile World Serpentarium, featuring a collection of more than 80 species of snakes from the familiar to the exotic and deadly.
“A 70-year-old man who’s so interesting and knows a lot about snakes does this amazing reptile show where he milks venomous snakes in front of us,” Ward said.“He takes the venom and dries it out, freezes it and sells it to biomedical companies for research.”
Besides organized visits to places such as Reptile World, the group will often take what Ward dubbed “night cruises.”
“Basically, after dinner, right when the sun is going down, we all get in the van and drive the backroads,” Ward said. “The snakes will come out to the road to warm up, because the road is still hot from the sun being out all day. You can find a lot of reptiles basking in the road at night when the temperature begins to drop in the evening.”
Gates said the night drives and kayaking in the Okefenokee Swamp were highlights of the trip.
“I’d recommend this class because it offers an opportunity for travel along the east coast, and it gives you opportunities to see and learn about beautiful and interesting reptiles and amphibians,” Gates said.
For complete information regarding Environmental Studies 349, Field Herpetology, email Landon Ward or pick up an application posted on his office door, Rhoades Robinson Hall, 137B. The application deadline is April 20.