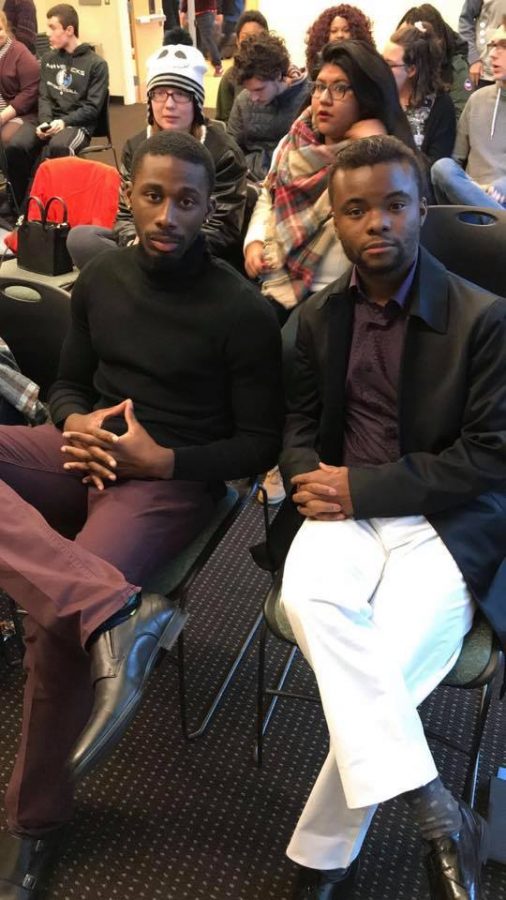 A’sha Noble
Opinion Staff Writer
[email protected]
Every superhero needs a sidekick and that is no different for UNC Asheville’s student body president.
Three vice presidential candidates are ready to take that position which often goes overlooked. Dora Tovar, Kimani Anderson and Delaydia Frink all ran for the office and each voiced their opinions, agendas and missions at the Vice Presidential Debate last Wednesday.
“Primarily my goal is to bridge to the gap between the student government and the student body by having more transparency and communication between both groups,” said Tovar, a junior political science and legal studies student.
UNCA held student government elections last week, while campaigning took place over the last month. Along with president and vice president, open positions included sophomore, junior, senior, residential and commuter senator.
She said creating personal relationships with students is a mission of hers and plans to carry this out by posting recordings and live streams of the SGA meetings online in an effort to keep the students updated, involved and engaged.


“I want students to be able to voice their opinions and feel comfortable talking to senators and executives about their concerns,” Tovar said.
Though students are the main priority, SGA has a few changes coming its way as well. Personal connections with the students and amongst the executives are not only wanted but needed.
“Making SGA a safe space and having a family atmosphere is a priority of mine,” said Frink, junior health and wellness student.
Tovar made it clear she is here to serve the student body and if given the position her title would ultimately mean nothing.
“Overall I’m here to serve the students. I am working for them, they are not working for me or anything like that. It’s whatever the students want,” Tovar said.
This diversity and inclusion is needed when serving all different types of people. Taking everyone’s opinions and views into account is vital when representing and working for the whole.The SGA does a great job of bringing diversity into a predominantly white college. In my years here, I have seen the way SGA has supported organizations promoting diversity and inclusion on campus.
“I want to have more diversity-inclusive ideas in SGA. We’re not going to be able to change things if we don’t have ideas that are constantly challenging us. I want to work with groups that challenge my views while remembering the student body as a whole by putting my personal bias to the side,” Tovar said.
Lauren Bulla is Tovar’s running partner, striving for student body president. Tovar and Bulla have worked together in SGA and PEPAH previously and each hold leadership positions in both organizations.
Bulla, a junior political science student, currently serves as vice president to Tim Hussey.
“I think we will both work well together because we are able to call each other out. It’s better than built-up resentment. We are able to critique and communicate ideas with each other very well,” Tovar said.
The relationship between Bulla and Tovar seems to be sturdy enough to take UNCA to new heights in the future. While a good relationship between a vice president and president is vital for a functional office, great relationships amongst the student body are important as well. Everyone needs to work as a team.
As a team player and student athlete himself, Kimani Anderson said he looks forward to bridging the gap between athletes and non-athletes. Anderson, a junior political science student, said an imaginary divide exists between the two groups.
“I’d like to eliminate the clique feeling we have between student athletes and the general student population. I know as student athletes we tend to stick to ourselves and that’s not fair to you guys. It’s definitely not fair to the campus as a whole,” Anderson said.
While it is true, the campus can come off as divided, some, including the athletes, seem to be okay with it. In my opinion, the athletic department makes friends amongst themselves and can come off rude and privileged.
Tovar said she already has plans to make more time for the students if elected vice president.
“I have a 20-hour-a-week job right now that I will not have next semester. I’m cutting down on credit hours as well this upcoming semester. I’m ready for it. I’ll make time for it,” Tovar said.
Fully taking on a job and giving it her all is what Tovar looks forward to doing, while a good balance of work and play seems to keep another candidate healthy-minded.
“With your health, it’s always nice to have a good balance of what you do occupationally and what you like to do personally. I’ve taken time to see what’s important to me and what I’m passionate about. Right now, running for student vice president is more of a priority to me, ” said Frink.
Being a student athlete leaves you with limited time on top of extracurricular activities. With all of that going on, it would be hard for someone to make time for vice presidential duties as well.
“In addition to being a student athlete I have tons of other responsibilities as well as various jobs, clubs and internships. I’m taking 18 credit hours. Time management is going to be a huge factor in therapy I manage my responsibilities but I assure you guys I will have that laundry list of responsibilities,”
The vice presidential debate took a turn when Anderson announced he has decided to no longer participate as a collegiate athlete to better focus on the student body and the community if elected. Anderson is leaving his scholarship to serve the student body more even if not elected.
UNCA’s relationship with older generations within the community is great. Our seasoned alumni support UNCA every chance they get but Anderson said he wonders if we forgot about the youth.
“There’s a gap between UNCA and the community. What about the young people in and around Asheville? Especially young people of color? Not just having them visit our campus one time but to have engaging activities and building relationships with them,” Anderson said.
Anderson said he hopes activities and events with the public will encourage youth in our community to visit our campus again for other events in the future. We would like youth to feel a sense of comfort when visiting our campus.
“UNC Asheville isn’t just a campus but a home as well,” Tovar said.
Delete Image
Align Left
Align Center
Align Right
Align Left
Align Center
Delete Heading