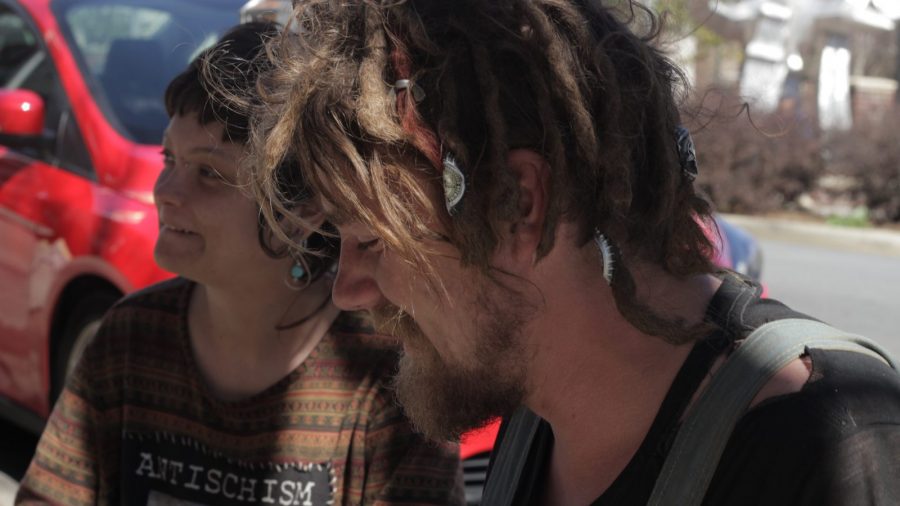 Many stories lurk throughout Asheville, whether they are behind the Vaudevillian jazz-folk played by buskers around Pritchard Park, the colorful businesses decorated with funky, hand-made crafts or the laughter echoing from a patio as locals and tourists alike enjoy delicious beer.
Larisa Karr
Managing Editor
[email protected]
Austin Solo, 24, roofer, originally from Virginia
Ashlan Combs, 21, artist, originally from Kentucky


What do you think of Asheville so far?
Ashlan: “It’s a cool, cool town.”
Austin: “It’s definitely really cute.”
Yeah, that’s a good word to describe it.
Ashlan: “It’s quirky. People have been really nice.”
Yeah, yeah. What inspires you guys creatively?
Ashlan: “My friends, my surroundings, experiences I’ve had.”
That’s cool.
Austin: “Me honestly, I feel that it’s harder now that I’m not a kid, but when I feel like I can get into my imagination and just drift off into a land, I’m mostly a writer, creatively. So when I feel like I can get into that,  I feel like I can not be around humans and I can make my own little worlds, I guess.”
Yeah, yeah. That makes a lot of sense. If you guys were to have a life motto that you live by, what would you say it would be?
Ashton: “What’s your motto?”
Austin: “I don’t know. I guess I’ll go with my Kurt Vonnegut tattoo, ‘Everything was beautiful and nothing hurt.’”
Yeah, that’s good.
Ashlan: “I don’t know, man. I ain’t got a motto.”
Austin: “Don’t panic.”
Ashlan: “Don’t panic!”
So if you guys were to describe yourself in three words, what would you say it would be and why?
Austin: “Done fucked up. That’s mine, I guess.”
Ashlan: “Can mine just be ‘bail’?”
What?
Ashlan: “Bail’, just bail.”
Just ‘bail’?
Ashlan: “No, I don’t know. I have no idea. I’m not an on-the-spot kind of person.”
So what would you guys say typifies or describes your fashion sense individually?
Ashlan: “Honestly, my fashion changes a lot based on my kind of interests at the time. I’m really inspired by fashion in general and a lot of different fashion. I went to art school for a bit and took a fashion design class and it was just super fun for me. I don’t know. I just try to be myself. Whatever I like, I wear. I don’t try to fit into any type of stereotype or genre or anything like that. If I want to look punk rock one day and then, like, a fucking, I don’t know, something the next day, I’ll do it.”
Yeah, for sure.
Austin: “Mine revolves around function and emotional attachments. I’m wearing these overalls because they’re very functional and I like them for that and now I feel like they’re fashionable because they’re functional and I like them. This shirt, I’m emotionally attached to. I’ve had for years. I just love it, so function and emotion, I guess, for me.”