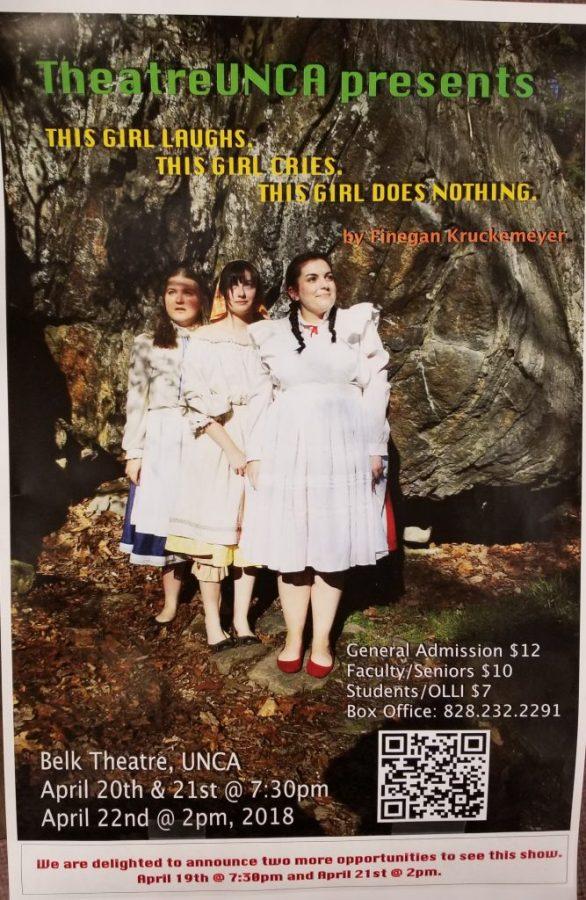 This Girl Laughs. This Girl Cries. This Girl Does Nothing is TheatreUNCA's newest production and follows three young girls from childhood to adulthood. Photo courtesy of TheatreUNCA


Abandoned in the woods by their father, per their stepmother’s demands, the girls begin their journey. Black said the girls find themselves in what they believe. They learn how to define family, love and forgiveness and find their own voices.
Black said because the play centers around three female protagonists, it has great timing given the current push in the women’s movement.
“It’s a great empowerment play, and it happens to be focused on three young women,” Black said. “That feels so good in this time when women’s voices are being heard so loud and strong.”
Each of the three main characters want completely different things.
“They all are empowered but in different ways. Two go adventuring for very different purposes and one wants to stay right where she is and make a home,” Black said.
Black said she found it very important that, even though This Girl Laughs. This Girl Cries. This Girl Does Nothing focuses on three young girls and their journeys growing up, anyone can connect to it.
“Anybody can go find their way in the world,” Black said. “Coming of age is something we do as humans, so it’s a human story.”
Ensemble member Landry Bohn, a junior political science and religious studies student, said he did not want the femininity and power of this story to be downplayed by the relatability of the characters.
“I think that’s very crucial,” Bohn said. “I think that’s very important, especially, you know, in this current time period.”
Bohn said although the play was intended for younger audiences, it still has an important message — that life doesn’t always follow a specific story.
“It doesn’t necessarily have a map you can follow. You just kind of have to go out and you have to do it,” Bohn said. “I think it’s really powerful that we are teaching this through three young women, who start the play as young girls, because we don’t have a whole lot of representation like that.”
Bohn said the mainstream stories about journeys of discovery and self-reflection often have male protagonists, not female ones.
Another member of the ensemble, Leah Griffin, a senior English and creative writing student, said she also finds this story important because of its message.
“It shows that there is not just one way to be a woman, and that womanhood can be expressed through so many different outlets,” Griffin said.
A woman can be physically empowered, or emotionally empowered through connections made with other people and building healthy relationships,  Griffin said.
“It can be expressed through motherhood and also through independence,” Griffin said.
Griffin said through the course of the play, the three protagonists have their own journeys which help them become  empowered people. But the play has lures other than the theme of female empowerment. Black said people should come for the theatricality of the play.
“There’s all sorts of creative strategies we’re using to tell the story,” Black said.
Black said people would enjoy the fairytale feel of the play, along with the contemporary themes it explores through this genre. She likes the unrealistic nature of the play. She said she enjoys the creative process of trying to figure out how to do everything.
Black said they incorporated the use of hand and shadow puppets, object transformation, in which an object is one thing, but is used as another, as well as the use of a ‘cranky,’ a device which moves pictures of scenery on a scroll.
“It has a lot of what we’re calling ‘fantastical moments,’ where, you know, these crazy things happen and we have to invent a way to show it on stage,” Black said.
This Girl Laughs. This Girl Cries. This Girl Does Nothing will be performed on April 20 and 21 at 7:30 p.m. and on April 22 at 2 p.m. in the Carol Belk Theatre.
Delete Image
Align Left
Align Center
Align Right
Align Left
Align Center
Delete Heading