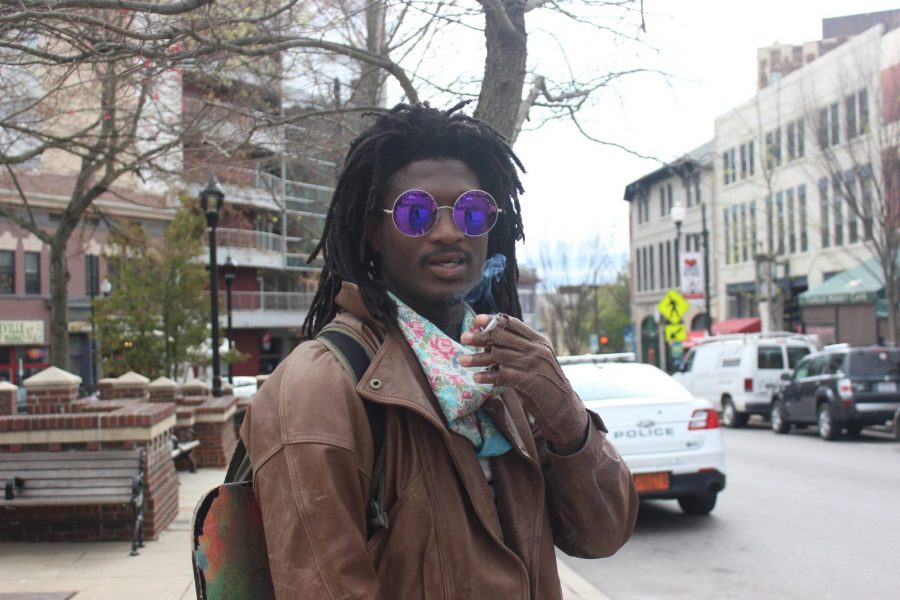 Many stories lurk throughout Asheville, whether they are behind the Vaudevillian jazz-folk played by buskers around Pritchard Park, the colorful businesses decorated with funky, hand-made crafts or the laughter echoing from a patio as locals and tourists alike enjoy delicious beer.
Larisa Karr
Managing Editor
[email protected]
Jeromiah ‘Jéjà Vu’ Mcrae, 22, musician, originally from Charlotte


So, if you were to describe yourself in three words, what three words would you say and why?
“That’s a good one. Ninja, because I like ninja stuff. I’m not really a true ninja, more like a nanja, you know? But I don’t know, I breakdance too, I forgot that.”
That’s awesome, yeah.
“If I had somewhere to, like, head-spin, I’d be into that.”
How would you describe your style?
“Well, if I want to be funny about it, I’d call it hobo-chic, like, you know, boho chic but with a hobo twist on it.”
Yeah, yeah, yeah. That’s very Asheville.
“If I was going to be practical, I would say, ‘I don’t have a style. I just go with what I feel.’”
You’re passionate about playing guitar. Who musically would you say inspires you?
“It’s really singles. It’s no specific musician or group, but I definitely love Led Zeppelin, Rush, Little Johnny, there’s a lot of people. There’s a lot of crazy musicians out there like the band Animals as Leaders, they’re crazy. I can do some tap stuff too as well.”
As an artist, as a musician, how would you say your career has evolved over time?
“I think over time, I’m changed from more of a punk type of style to hip-hop. Originally, as a kid, I was always rapping in summer camp, because it was a black summer camp. We always used to have freestyle sessions, a cipher or whatever.”
That’s awesome, yeah.
“And so, in the cipher, we basically, we’d kind of roast each other and then just try to get the best bars out of it and then I stopped listening to rap when Soulja Boy came out because I realized rap was taking a terrible turn.”
Yeah.
“Then later, I listened to Soulja Boy and I was like, ‘This shit’s actually some gold.’ I love it and then trap happened and then I stopped rapping again and then I listened to trap and I was like, ‘It’s hype.’ You know, you can’t argue with the hype-ness.”
Yeah, there’s a reason why it’s popular.
“Yeah and if you dissect it, actually, they just added snares to ancient African rhythms. That’s why it’s so tight. That’s why it’s so good to listen to.”
That’s cool.
“It’s rooted in a lot of history. Rap itself is based on an ancient style of spoken word, call and response, that was going all over Africa.”
That’s so cool. So, what are you doing here in Asheville? Do you work here or are you just hanging out?
“I sort of work here. I work at a temp agency. I’m also just hanging out, drinking alcohol, trying to get LSD and smoke weed and chill.”
Nice. Have you had any interesting, memorable experiences here so far?
“Quite a few, yeah. For one, damn, where do I start? Wow. My first experience in Asheville was Bele Chere.”
It was so trashy.
“Yeah, they had to stop Bele Chere because there was this Bele Chere serial killer. He was killing the beautiful girls. That’s why Bele Chere doesn’t happen anymore.”
That was such an Asheville institution.
“Yeah, it was beautiful, but not quite enough. It was so beautiful that the evil could see the beauty in it and destroy it. But, yeah, so, my first time coming to Asheville, I went to Bele Chere and after that, my most memorable experience in Asheville was when me and my friend came up here. We just got an eighth of weed, no, we had ounces. So, we came up with the ounces or whatever and we’re meeting all these people and we’re just like, ‘Hey, you want some weed? Cool.’ Because they’re supposed to be selling it in Charlotte, but it’s like, fuck it, fuck selling it. This is whack and you’d get in trouble for it, so, we’re just out here giving out weed and we had crazy adventures when we got high for sure.”