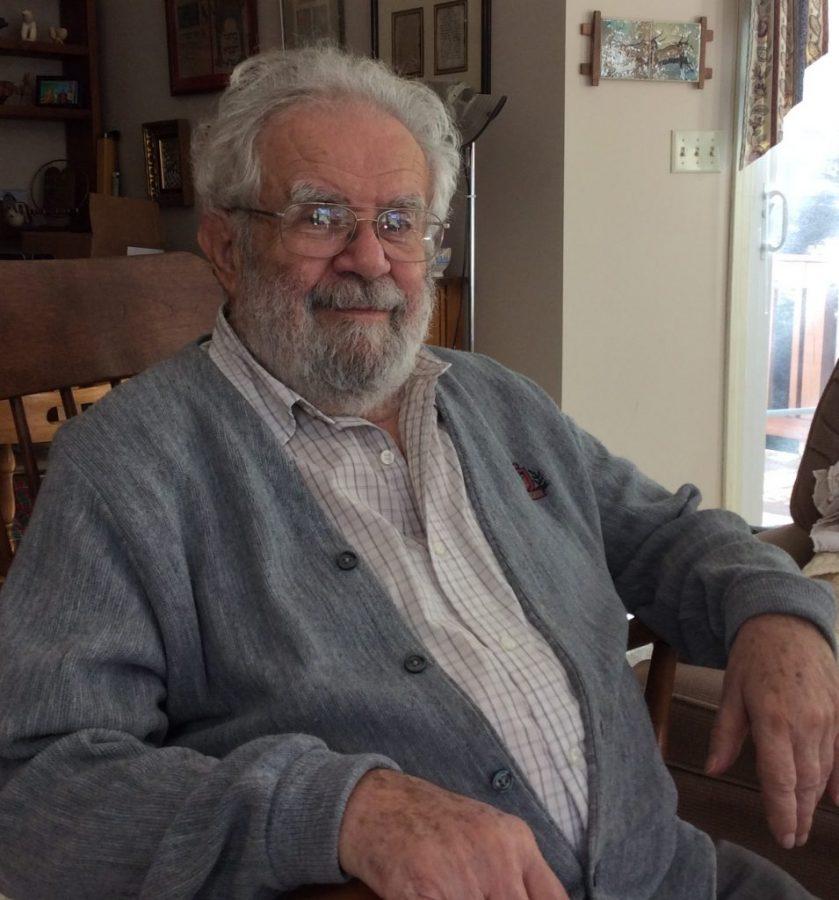 Holocaust survivor Walter Ziffer will speak to the UNC Asheville community on April 18 at 6 p.m. in the Humanities Lecture Hall. Photo courtesy of UNC Asheville.

Victoria Carlisle
News Staff Writer
[email protected]
Holocaust survivor Walter Ziffer returns to UNC Asheville campus for his talk, “Holocaust: When Law and Righteousness Clashed” tomorrow.
Ziffer, an author and educator, was captured as a young teenager and enslaved in Nazi slave labor concentration camps. Freed at the age of 18 and reunited with his parents, Ziffer became a mechanic before earning two master’s degrees and a doctorate in theology. Ziffer wrote three books, most recently his memoir, Confronting the Silence: A Holocaust Survivor’s Search for God.
“I am a biblical scholar and theologian. This said, I am convinced that both these disciplines have content that is potentially beneficial for our lives today. Given the fact that we are dealing with texts that are ancient, I need to be selective in my choice of texts that are both of great academic importance to enlarge our knowledge and understanding of past history but also of value for our understanding of contemporary life,” Ziffer said.
Ziffer said he takes the opportunity to speak to several schools. Deborah Miles, director of Center for Diversity Education, recalls Ziffer’s talks from a month ago, when he spoke to a crowd of students in Lipinsky Hall.


“He told the story of what happened to him and his family when he was the same age as most of the young people there; how his normal teenage life of school, romantic crushes, and family was upended when the Nazis marched into his town, burned down his synagogue and then deported the Jewish community to death and slave labor camps,” Miles said.
Miles met Ziffer years ago through the Jewish community. She said she knows his story well from listening to several of his talks, but in a recent talk he said something different.
“He said something like, ‘Do you think those folks are different than we who sit here today? We have the same DNA. What happened then can happen all over again. We are the only ones to stop that. We must be vigilant in the face of hatred of other people,’” Miles said.
While Ziffer openly discusses his past frequently, he said it never gets easier. Specific memories overwhelm Ziffer with emotions.
“As I reminisce and share, long forgotten events, some good and some forgotten, emerge and open new wounds. This holds true especially with regard to my wonderful parents who during their deportation in their higher age than mine, must have emotionally suffered even more than I. I know that this or that story will make me choke-up and so I try to avoid these,” Ziffer said.
The political science department sponsored Ziffer’s talks. Belk Distinguished Professor of Political Science Mark Gibney said he finds great significance in Ziffer’s story.
“Walter has had an incredible life. We see determination and a will to live that is simply unfathomable. And his sense of perspective is unmatched,” Gibney said.
A survey by the The Conference on Jewish Material Claims against Germany, conducted by Schoen Consulting, finds 22 percent of millennials in the United States have not or cannot be sure they have heard of the Holocaust. The same survey finds 70 percent of Americans think less people care about the Holocaust now than they once did, and 58 percent believe an event like the Holocaust could happen again.
Miles said she hopes with hearing Ziffer’s story students will learn from history’s mistakes and promote human rights for all.
“Dr. Ziffer is 92 years old and among the last of the living souls who can tell the story of what happened to them as a remaining survivor of the Holocaust. When today’s students hear this story of that happened to millions of people — Jews, Sinti Roma, religious and political dissenters, gays — they become carriers of the story, and the lessons, into the 21st century,” Miles said.
Ziffer visits the UNCA campus regularly for talks and book signings. He also taught here as an adjunct professor.
“His story is always an important one. For years he would come to my class and without exception it was a riveting experience,” Gibney said.
After speaking at middle and high schools, teachers often encouraged students to write Ziffer letters of their reactions and appreciation. In instances of students creating thought provoking and touching responses, Ziffer said he feels that is when his message and story have truly been heard.
“In some cases they convey to me how deeply touched the person was and that her/his experience of hearing my story had a transformative and lasting effect on that person. These letters give me hope for the future of our country and humanity,” Ziffer said.
While Ziffer is no stranger to the UNCA campus, Miles said students can still learn from his lectures, even if they have heard him speak before.
Ziffer said it is important to remember history to prevent repeating the same mistakes. People who suffered through history’s errors must convey why these errors cannot occur again.
“All of us have a tendency to forget the past. Even the Holocaust, history’s greatest of all crimes in which millions of innocent people perished, is receding into the past and forgotten. I will not and cannot forget that 6 million of my fellow religionists, the Jewish people, were murdered by Nazi Germans. Fourteen of my uncles, aunts and cousins were among the murdered,” Ziffer said. “I consider remembering these shameful deeds and passing on the history of this tragedy is my duty, hurtful to me as this may be. This duty empowers and enables me to write a memoir at age 89 both for my children, children’s children and beyond but also for folks who want to grow in knowledge and spirit and be defenders of freedom and goodness in our world.”
Ziffer has played the role of a survivor for much of  his life and he strives to keep a positive attitude through everything to stay motivated to make necessary changes in society.
“So, my message is: do not wait for a better future to be thrown into your lap, but become involved in the social and political scene to make a positive contribution,” Ziffer said. “We must not be fatalists. We must be agents of renewal and betterment for human beings at home and abroad.”
Delete Image
Align Left
Align Center
Align Right
Align Left
Align Center
Delete Heading