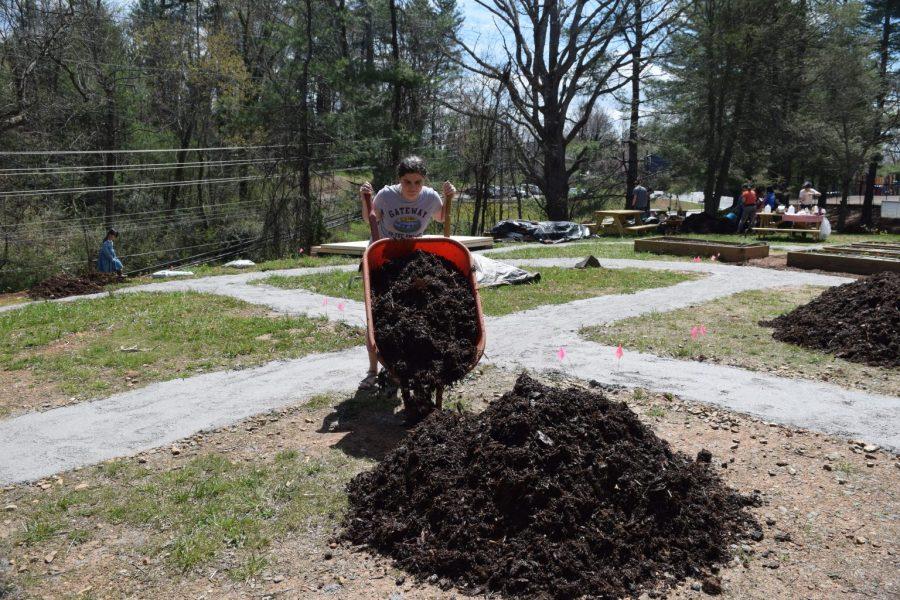 Megan Suggs
Contributor
[email protected]
Members of St. Eugene Catholic Church shoveled giant piles of mulch into wheelbarrows across the lot beside the church.
By the end of Sunday, picnic tables replace the former mounds of mulch, and with that, the UNC Asheville Catholic Campus Ministries president and senior environmental studies student Andrea Genna’s vision for the Friendship Garden/Jardín de la Amistad is closer to completion.
“I remember Andrea as always being eager,” said Gloria Schweizer, campus minister for Catholic Campus Ministries, reflecting on how Genna grew during her college career. “ I think that eagerness has grown into steadfastness.”
Genna, originally from Raleigh, said she wanted to combine an internship requirement for the environmental studies program with Disciples in Ministry, a Catholic program. She connected with individuals in the parish involved in previous environmental projects of St. Eugene’s and originally intended to begin a compost program.


“How much compost materials does the church produce?” Genna said. “Hardly any. We have one dinner there a month. You can’t really compost styrofoam cups and there’s not much else.”
The next idea, Genna said, became creating a community garden. She said she measured the lot the garden was to be built upon and realized what a huge undertaking lay ahead of her. She started going to the meetings of St. Eugene’s Care of Creation, an environmental group for congregation members. The membership consisted of retirees and few other age groups. The group was excited about Genna’s attendance.
“I was inspired by them being inspired by me,” Genna said. “I was like, you know, I should have a major project. We talked about composting. We talked about a community garden. How about a community garden at that empty lot? They were all really inspired by that.”
Head of the Friendship Garden and member of St. Eugene’s Cynthia Gibbs said she was inspired by Genna’s ideas. Her research, layout and conversations with St. Eugene’s priests and Asheville Catholic School’s principal made it easy for other members of Care of Creation to see Genna’s vision for the garden.
It also illustrated how much help she needed. As a college student, she said she alone did not have the time or resources to see the garden come to fruition. Care of Creation could make the garden a reality and made the project part of the organization’s charter. Now the garden needed someone who could dedicate more time than Genna could to leading the garden building effort.
“I’m not a gardener, so when we talked about at the meeting who wanted to be in charge, nobody raised their hand, me least of anyone. By chance, I went to a meeting the next week which was ‘Peace and Justice’ and they brought up the Hispanic community, that they’re so strong at St. Eugene’s and we want to have something in common with them, we want to know them, but we don’t know what they need,” Gibbs said. “It just hit me that the garden would be the opportunity to do something with both of these communities and in working together, you talk, you get to know each other and you’re working for a common goal.”
When Gibbs, a retired member of St. Eugene’s, started organizing garden workdays, Gibbs and Genna said the only garden-like aspect of the lot was a few raised beds. With the help of the St. Eugene’s community, more raised beds were added as well as a path and a rock garden. A shed is being built right now and plants, both decorative and edible, are being planted.
With all of this progress, both Gibbs and Genna see communities coming together, whether that be Anglo and Hispanic or college students and retirees.
Gibbs gives all the credit to Genna’s great idea.
“I would just be going merrily along on a Saturday,” Gibbs said, “going to the movies and hanging out, if it wasn’t for dear Andrea and I would not be as happy.”
Delete Image
Align Left
Align Center
Align Right
Align Left
Align Center
Delete Heading