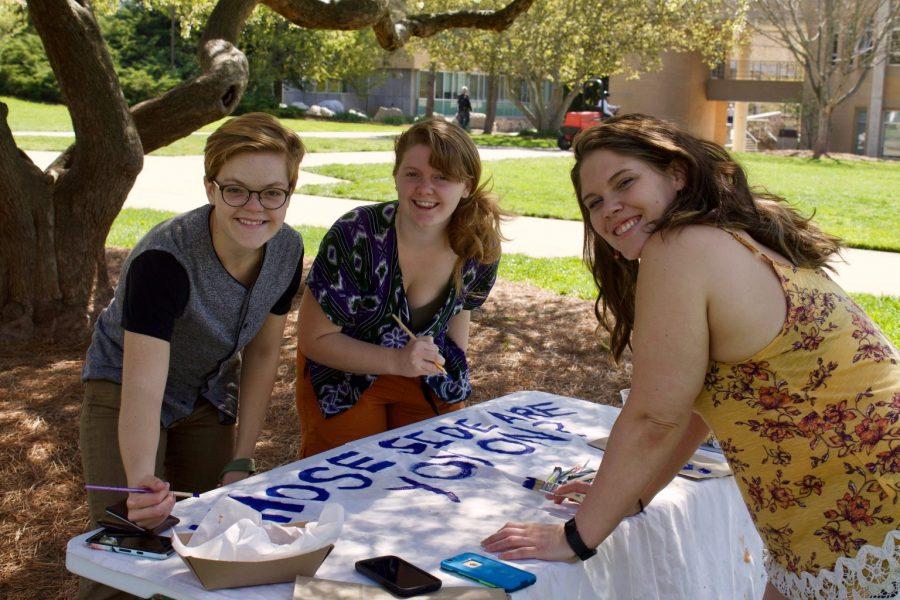 Annabel Gibson
News Staff Writer
[email protected]
UNCA Divest, a student-run group on campus, met with the Endowment Investment Committee at UNC Asheville to discuss the universities’ investments in fossil fuels.
“We are still making money off of the fossil fuel industry,” said James Smith, the UNCA Divest coordinator. “While we do have individuals who are totally supportive, institutionally there is so much resistance to that change that it’s taken years to get to where we are now.”
UNCA Divest was established in 2015 with the goal of divestment of fossil fuels by all 17 institutions which contribute to the UNC system endowment.


“UNCA is in the process of drafting and submitting a Request For Proposal, a document that will be requesting investment firms to submit applications to potentially manage UNCA’s endowment.  None of this would have happened had it not been for Divest and the students,” said Ash Berger, a senior economics student and an Environmental Social and Governance fund coordinator at UNCA. “This movement has been from the start and continues to be a student-led movement, which has transformed from idealist activism to actual action and progress with the support of administration behind it.”
In receiving approval for submitting an RFP, the group will be allowed to request more detailed information and proposals from the top sustainable investing companies.
“Our endowment, which consists of, I believe $47 million right now, currently profits off of huge fossil fuel companies, pipeline projects, and that’s conflicting with our mission statement as a school which kind of expresses a commitment to sustainability,” said Smith, a junior chemistry and environmental communications student. “What that RFP means is that we can take that endowment that is currently being managed by UNC Management and shift it to someone who can accommodate for sustainable investment.”
The group requests the university upholds its mission statement to incorporate economic, social and environmental sustainability into their institutional practices and curriculum through the divestment of endowment funds from fossil fuel companies.
“We have this endowment here, we combine it with the pool of other endowments from schools like Chapel Hill and NC State, 17 other UNC system schools all funnel their money into this over 5 billion dollar fund that’s managed separately by this other company called UNC Management.” Smith said. “It’s like we kind of blindly give our money to this company, they do what they want with it and we’re under the assumption that they’ll provide good returns, and that’s where we’re at right now.”
Since their start in 2015, UNCA Divest worked toward the prioritization of sustainability in UNC Management Company’s investment strategy and for higher levels of transparency when it comes to reporting on investment holdings.
“It’s honestly kind of mind-blowing that our administration is so supportive because historically successful divestment campaigns have won by just protesting and really calling out their administration,” Smith said. “The fact that we’re taking the steps means that none of us have to be in that really uncomfortable position of direct action anyway.”
Smith said while there was some resistance from the board initially, no one has outwardly objected to the movement.
“I got involved with the UNCA Divest Coalition because I think the divestment movement as a whole is a super important component in the discussion about climate change and what we can do about it,” said Kelsey Hall, a freshman environmental policy and management student. “Divestment is a key step we can take to align our university’s sustainability values with our investments’ impacts and reclaim power from the fossil fuel agenda.”
The student group currently meets every Thursday at 11:30 a.m. in the Glass House on campus.
“The problem is that climate change is such an immediate problem that we will be increasingly facing. It’s just a trade-off between enough progress in the right amount of time and like the catastrophic effects that climate change does present.” Smith said. “I think we as an institution are ahead of a lot of other schools, and particularly in the sustainable investment field a lot of schools are now looking to us for leadership in that area because of the progress that we have made.”
Delete Image
Align Left
Align Center
Align Right
Align Left
Align Center
Delete Heading