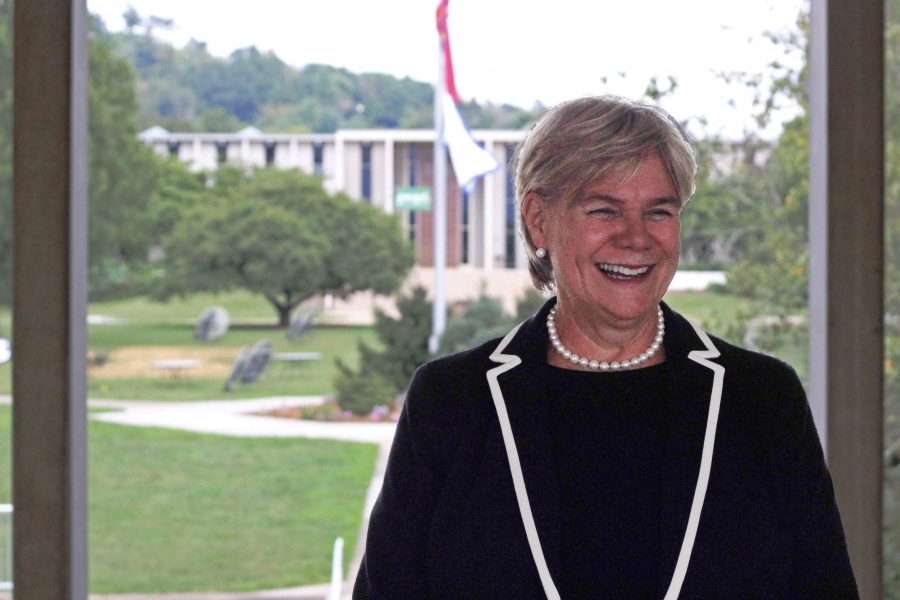 Taylor Sexton
Arts & Features Editor
[email protected]
Contained within the weathered brick walls of Phillips Hall, overlooking the sunny, bustling quad sits Nancy J. Cable, UNC Asheville’s eighth permanent chancellor.
Nancy Cable’s been at UNCA for nearly four weeks now and she’s been spending her time learning the campus, getting to know the faculty and staff and of course, unpacking.
“The fun part has just been immersing myself in the community and getting to know as many people as I can. What’s fun now is that some people, even if we’ve not met, they’re recognizing me as I walk across campus. I’m meeting more people. So that’s really fun,” Cable said.


So far, Cable said her favorite thing she’s done in the community was the Farm to Table Dinner on Sept. 4.
“The weaving of our values around sustainability and humanity and human rights,” Cable said. “It felt like a real community to me and that’s one of the reasons that I wanted to come and do this work at UNC Asheville.”
The search for a new chancellor began in September 2017 and the faculty search committee was put together a month later in October. This committee met with a short list of candidates and after a series of interviews and meetings, they sent the top three candidates to Margaret Spellings, president of the UNC school system.
Ellen Holmes Pearson, a professor of history at UNCA for 16 years served as a faculty member on the committee. .
Pearson said the committee was very impressed by Cable’s leadership experience and her dedication to the liberal arts mission.
“She is confident, direct, articulate. She is also warm and exudes a lot of positive energy—I was very impressed with her firm handshake. She is very much used to “working a room,” which is an essential trait for a chancellor,” Pearson said.
Cable’s previous job was with Arthur Vining Davis Foundation, where she served as the president beginning in October 2012. This foundation was created from the will of Arthur Vining Davis and supports higher education, public television, health care and theological and interfaith work.
Cable said that Asheville was the only job that she was willing to leave the Arthur Vining Davis Foundation for.