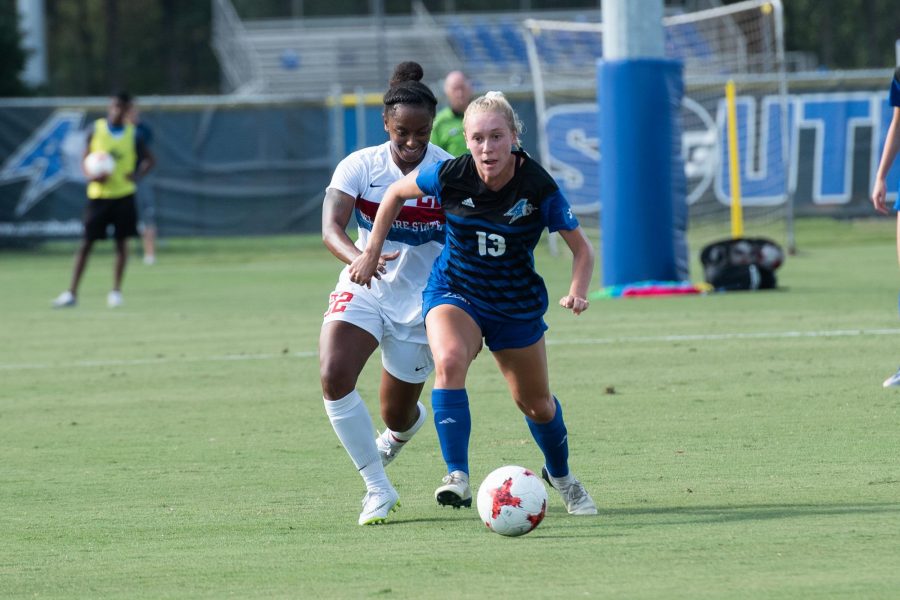 Martin Phillips
Sports Staff Writer
[email protected]
The UNC Asheville’s women’s soccer team saw a huge shift in leadership this year with a brand new coaching staff being introduced and a huge freshman class joining the team.
“We’ve got an entire new coaching staff, our team is really young, we lost a lot of players and seniors in general,” said Skyler Chillson, a sophomore at UNCA and one of the Bulldogs’ forwards. “With all the freshman coming in and new coaching staff I think we have had an amazing turn around.”
Lindsay Vera, the new head women’s soccer coach, settled into her role learning throughout the way.
“It’s definitely a learning experience for me, but also for the players because we’re all new to each other. We’re still learning the language of each other and our personalities,” Vera said.
Mark Godin, the director of multimedia at UNCA, said he believes in the new coaching staff and the direction they lead the team.
“What I’ll say I like about Lindsay is her coaching style is the right approach that the team needed,” Godin said. “She’s more interactive with them on a personal level kind of like player to player rather than a head coach to her team so with that personal bond it almost seems like they’re able to feed off each other a lot more.”
The Bulldogs got off to a sluggish start with their season, with the first game ending in a tie and the next three losses, but they still move forward. Their last game against The Citadel was a 3-2 victory for UNCA.
“That game was full of adversity, we had like four lightning delays and it was hot and raining at one point then we got kicked off again for lightning,” Vera said. “Through all of that we kept talking about our mentalities and stay up and stay ready and they certainly did that. I feel like they came out of the gates swinging rather than sit back and wait to see what happens like we’ve done in the past games.”
Maya Gutman, one of the team’s 10 freshmen, said she saw growth within the squad in her short time at UNCA.
“We keep improving, we just keep building on what we’ve done,” Gutman said. “Each game we get better and better and better.”
Emily Dueñas, another sophomore forward on the team, thinks their offense needs the most work.
“I think where we need to improve is increasing the amount of shots we have for our attacks and that will come with just learning about how we should possess in this new system,” Dueñas said.
Gutman agrees that their offense needs to be more efficient.
“We can do better at our attack, just getting shots off,” Gutman said.
Chillson said the team does especially well with their defense.
“Our defense is really strong,” Chillson said
Setting goals for themselves helps the Bulldogs find the improvements they look for, according to Vera.
“Each player has a personal goal based on their positions and personalities, what they’d like to do on the field and off,” the NC State alumna said. “Things that are measurable that we can go back and check right away if we did or didn’t do it, those are goals that will hopefully get us to a bigger goal in the end of the season which is obviously to have a better record and get into the playoffs.”
Gutman’s personal goal focuses around the team as a whole.
“Keep improving every game. We have done so-so thus far, every game we’ve gotten better in some aspect of the game of soccer,” Gutman said.
With such a young team, improvement can be expected according to Godin.
“I would say with all the freshman on the team and Lindsay taking over as her first head coaching job just use this as an opportunity to grow and become a little bit more cohesive as a unit,” Godin said. “Once everybody knows their roles and how to execute the game plan then you can worry about climbing the totem pole that is the Big South Conference.”