Tattoos should not impact a professional environment 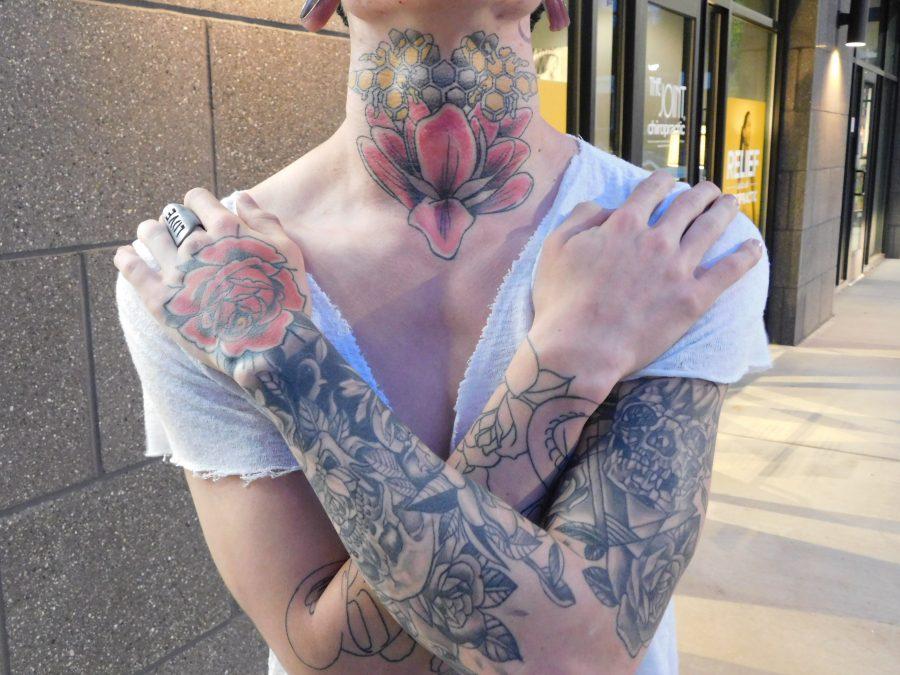 Cooper Knight showing off his neck and arm tattoos. Photo by Maxx Harvey

Peyton Rodgers
Opinion Staff Writer
[email protected]
Depending on the job, the acceptance of visible tattoos may vary. Many people feel frustrated when asked to cover their tattoos while working and feel the need to question why having tattoos determines an individual’s work ethic.
Does a surgeon having a full sleeve negate their ability to successfully perform a surgery? No. Permanent ink does not determine one’s ability to complete a task, but can create an image that not everyone appreciates.
Mckenzie Wolford, a social worker for Kannapolis City Schools, mentioned visible tattoos should not impact your ability to perform a job, but in some professions, it is better to keep them covered.
“They can appear unprofessional. Some tattoos have vulgar words, sayings or pictures and that is not appropriate in some fields,” Wolford said.


Wolford has minimal visible tattoos but, said she would willingly cover them if she had more due to working with students and their parents.
“As a social worker, I would be conscious because I work with children and families and although some tattoos are acceptable, someone who is covered in them might give off a very bad view to the families we serve,” Wolford said.
Wolford recognizes younger staff members typically have more tattoos than older staff members.
The opinions of tattoos vary from relating to prisoners and gang members, to art and self-expression. Personally, I view them as a form of art. I believe our body is a canvas and we have the freedom to decorate it in any form we choose.
Some people like to wear art on their clothes and others prefer to wear it on their skin, but I can understand the view that they appear unprofessional. Some tattoos convey messages that make others uncomfortable and would create a bad impression at any profession.
Abigail Hickman, work-based learning coordinator at Mountain Area Workforce Development, said tattoos should be covered in any professional environment. If given the chance to interview a candidate with visible tattoos, she would think they lacked self-assurance and had low self-esteem.
“As they become more ubiquitous, two things will happen: one, they will become more accepted, but two, they will lose their import,” Hickman said.
When speaking with local college students I was given a more accepting response to tattoos.
Cooper Knight, a sophomore English major at UNC Asheville, said tattoos do not determine a person’s work ethic.
“When someone is covered in tattoos they’re going to look at them differently, because the stigma is attached and they’re going to, if someone else walks in without tattoos they’re probably going to be hired despite their work ethic,” Knight said.
Knight talked about a company’s image and the importance it has for the business. He claims many people get caught up in his tattoos and certain businesses do not want that as their image. Knight said he understands that since he has a neck and hand tattoo, job searching can become a challenge at any time.
When I started my ink journey, I became aware of the stigma attached to tattoos. I often receive questions about why I wanted them, what they mean, why I would sit through the pain or even pay the money. Although everyone may not support the idea of ink on your body forever, with my body comes the freedom to choose what does and does not happen to it. I don’t believe all tattoos need an important, life changing message.
I support tattoos only for the desire to have one, or two or multiple. I understand that due to the stigma created around tattoos, many businesses hesitate allowing them on their employees. Sadly, I feel that this will not change until the majority of people no longer have distasteful views of tattoos.
Even though some view tattoos as a waste of money and time, Mark Griffith, a sophomore biology major at UNCA, said symbols carry great power. He recognizes the culture of tattoos, being relevant since ancient China and thinks the issue many people carry with tattoos is the misunderstanding.
“Tattoos are very deep, personally and the cultural are things that have meaning to you and no one else, so when someone else sees them it doesn’t mean anything, it’s just kind of like a distraction,” Griffith said.
I believe tattoos are a form of expression and should be accepted in any professional environment. With art comes perspective and that is why, I believe, some people question the meaning and reason for tattoos, but that does not make them a negative way of expression. When it comes to my future career, I hope to be somewhere that has full acceptance with tattoos, but I am prepared for an employer that does not.
As much as I support tattoos in a professional environment, I cannot expect everyone to have the same views as me. I must respect that some people don’t understand the concept of permanently marking your skin with ink and may have negative perspectives about tattoos, especially in a professional environment. I hope that it becomes acceptable in all working environments to have visible tattoos and that the negative stigma that comes along with tattoos completely fades.
Delete Image
Align Left
Align Center
Align Right
Align Left
Align Center
Delete Heading