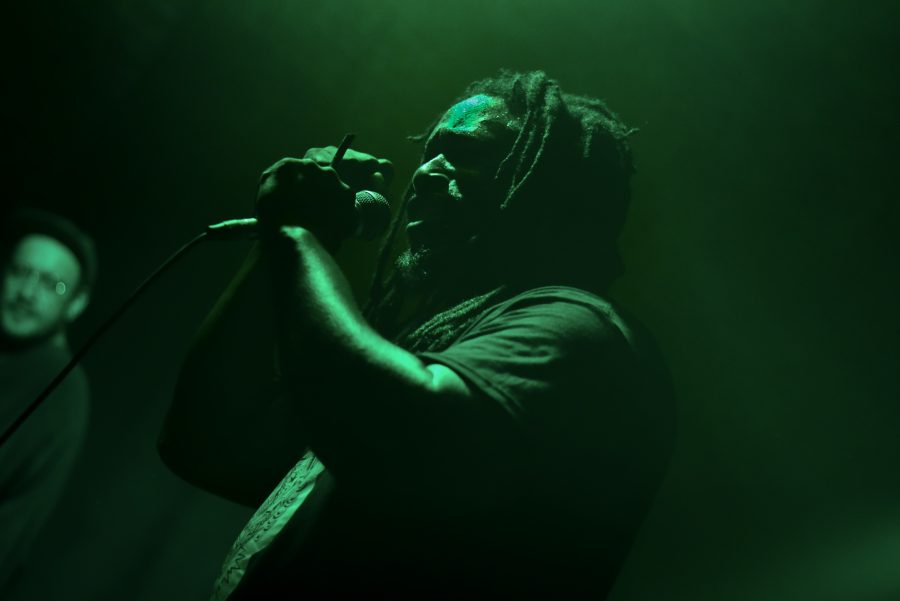 Davaion Bristol has been making music under different names since 2012 and he said his sound and message haven't changed, he's just gotten better.

Emily-Ann Trautman
Photographer
[email protected]
A smoke machine propelled a thick haze that rolled around the artists and poured off the stage as it crept through The Mothlight and wove its way through the bustling crowd. Spaceman Jones and the Motherships emerge to perform their third project, a new EP called Space and Time.


“I always expect the worst. You know what I mean? I’m always like, ‘oh shit nobody’s gonna come. It’s gonna suck. Nobody’s paying attention,’ but it ends up turning out and it’s a good crowd. I always feel blessed to have anyone come out, let alone a good, decent-sized crowd. It was dope,” said Cliff Worsham, singer and producer for Spaceman Jones and the Motherships.
The performances opened with fellow hip hop artists Effigy, SK the Novelist, Peter the Poet, Kingdom Kome and Musashi Xero. Each set seemed to beckon Spaceman Jones and the Motherships to the stage as a people continued to seep into the bar.
The Mothlight commonly hosts area musicians and prides themselves on being a home for local and traveling artists who value creative expression and intellectual freedom.
“We love West Asheville. Downtown fuckin’ sucks. I work downtown, Cliff works downtown, I’ve been working there for five plus years. It’s nothing like the West Side. I think it’s a little more accessible. I think that it’s the right venue for our fans. We’ve been able to have good times there. The Mothlight is home,” said Davaion Bristol, otherwise known as Spaceman Jones.
Spaceman Jones and the Motherships is made up of two friends with a shared dream to bring love, culture and awareness of social issues back into music. They have released three projects, have music prepared through this time next year and won Best Hip-Hop Artist/Group during the Best of WNC 2018 contest.
“The good thing about Spaceman Jones and the Motherships is that it’s already got its own energy rolling. We are very fortunate with the response that we have. A lot of guys don’t get the response that we get and I’m thankful for that. We rely 100 percent on our fans and our sales to fund Spaceman Jones and the Motherships,” Bristol said.
Support from their fans comes from more than just a love of their original beats and lyrical content, but for the message they promote, too.
“I support them because they are some of Asheville’s truest talents. They hustle hard and speak truth. The city needs acts like that,” said Musashi Xero, 28-year-old rapper who works with Worsham on producing his own music.
Bristol, the genius with the pen and deep, commanding voice behind the persona known as Spaceman Jones, comes from the West Side of Asheville. He is a 40-year-old jack of many trades. Besides rapping, he is a chef, tour guide and a record label co-owner. Bristol said that his deep interest for rap music began when he was still a child.
“I’ve been doing music since 1994. I was in jail and there was these two dudes from Charlotte, they was rapping, and I always loved rap music. I had been infatuated with it since I was a kid, ya know, MTV Raps, Rap City and the guys in the neighborhood would play stuff in their cars when they rolled by. When I was in jail, I was 16, they were rappin’ and I figured I’d try my hand at it. That was my first time with rap music, I just wrote something down. I didn’t really get serious with it until like 2012,” Bristol said.

Worsham, 38, is a beat producer, vocalist and the other half of Spaceman Jones and the Motherships. He comes from a musical family background, and began to really focus on music and make his own at 10 years old. He learned many skills from family and was heavily influenced and inspired by his uncle, Gary, but said that learning music and production has been mostly trial and error. When he isn’t making music, he works at Empire Tattoo in downtown Asheville.
“I do it because it fulfills this need that I have in my bones to get it out of me. You know?  I don’t know other ways, well I know other ways but they’re more dangerous for my health, so music gives me what I need and that fulfillment,” Worsham said.
Aside from Spaceman Jones and the Motherships, Worsham is the lead singer in the alternative/indie group RBTS WIN, going by the alias, Motherhood, as well as the lead vocalist in new heavy metal band, Daybreaker. Aside from singing, he is also an accomplished producer making beats for artists as far away as California.
“Me and Dave have been working together since late 2012, early 2013. That’s when we first started. I lived on Burton Street and I met his brother, then Dave and I linked up. He was putting out this tape and I gave him a couple beats for it. From there on we started getting serious with this new project in 2015. That’s when we started doing The Motherships stuff. Before that I was just producing beats for him,” Worsham said.
Although Bristol and Worsham started their successful group in 2015, they didn’t release their first album, Spaceman Jones and the Motherships, Vol.1, until 2017.
“It took us two years to make the first one, but we put out two more after that within a year. We got a lot of unreleased material that we’re going to be hittin’ y’all with next year and in 2020,” Bristol said.
The natural chemistry between Bristol and Worsham is evident when they get on stage and the entire room sways with the energy and vibes released from each track they drop, Xero said.
“There’s always good energy at a Spaceman Jones and the Motherships shows. The two of them work great as a unit,” Xero said.
The night came to a close with supporters and fans leaving the dark music venue carrying their new merchandise: t-shirts, CDs and stickers, talking about the show and still bobbing their heads to the music they just experienced.
“It was dope. I felt like everybody had a really great time. I feel like we’re good at making that wavy party vibe happen. We really enjoy The Mothlight,” Worsham said.
Worsham said they plan on dropping a three-piece project in January that will be packed with heavy political views and opinions.
“It’s about how politicians are scum and about how we need some better leadership in this country and the leadership we need is us working together and doing all this together. We don’t need what they’re feeding us and we don’t need the lies anymore,” Worsham said.
Bristol and Worsham said they plan to continue to collaborate for a long time; with the audience response and following they have, it would be a mistake not to.
“I make music because I don’t have any other choice. This is what I do. I built my life to the point where it supports this and this is a major sense of joy and accomplishment for me. It’s also challenging. This is my quest and my adventure in this lifetime. I’ll make music ‘till I die,” Bristol said.
You can find Spaceman Jones and the Motherships on Spotify, Apple Music, iTunes, Soundcloud and almost any music platform, as well as shows in town. Follow them on social media @spacemanjonesandthemotherships
Delete Image
Align Left
Align Center
Align Right
Align Left
Align Center
Delete Heading