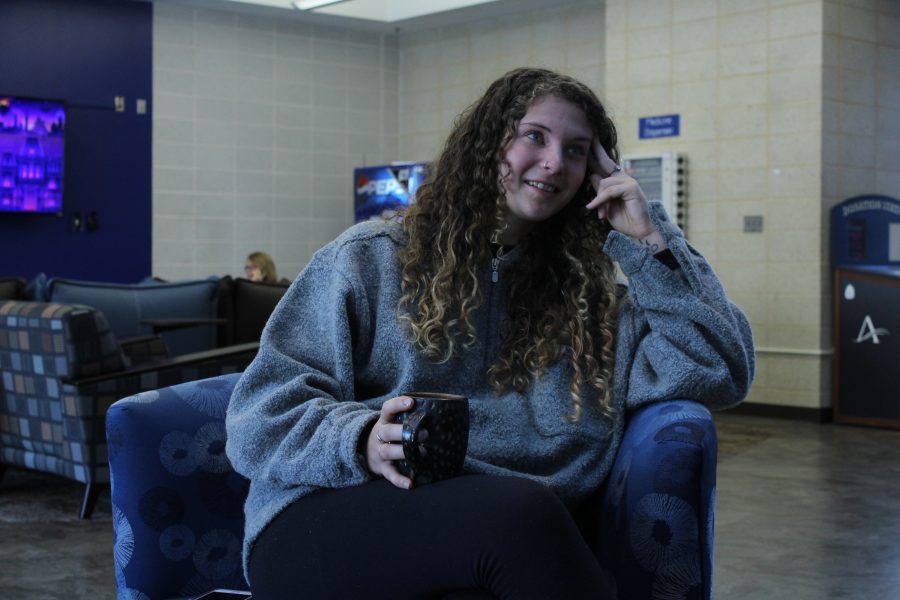 Madelyn DePodesta
Arts & Features Staff Writer
[email protected]
Artist Lindsey Sigmon, a senior at UNC Asheville,  continues to work hard by assembling her solo art exhibition featuring her works that implement both decorative and ornamental elements and patterns.
“I’ve always been drawing. I started wanting to be an artist in high school,” Sigmon said. “I do a lot of pattern and decoration and ornamental stuff. A lot of it is inspired by former female artistic production, but then just ideas related to home and the domestic sphere so there’s a lot of quilting and embroidery and wallpaper.”
Sigmon finds inspiration for her artwork from artists based in the sphere of where she grew up.


“A lot of the almost anonymous quilters, especially of the Catawba county region where I’m from, I’ve been looking at a lot lately,” Sigmon said. “And the repetition and the pattern they use, but then artists of the pattern and decoration movement for sure.”
The art Sigmon produces consists of repetitive patterns of flowers or other elements of nature,  utilizing pale colors to give a natural, calming tone to many of her works.
“It’s just something I can do that I feel, it’s like the thing where I can show up and do it from 9 a.m. until 2 a.m. and not feel tired or like I want to stop. That’s the thing about it that keeps me coming back, is I feel pressed to do it and I don’t feel like I have to force myself to do it.”
Sigmon also finds inspiration through female artists of the ornamental and decoration movement. She even got the privilege of meeting one of her favorite artists.
“There’s a lot of really cool female artists working in there,” Sigmon said. “Joyce Kozloff, who I’ve been looking at a lot lately, I actually got to talk to her a little bit so that’s really exciting. She’s a big hero of mine.”
Lithography acts as the primary medium for Sigmon, which allows her to develop her signature floral patterns while also making her art more accessible and affordable.
“My medium is lithography,” Sigmon said. “It’s a form of printmaking, it’s like etching large slabs of limestone. I like doing that a lot because you can create multiples of one image: like lots and lots of multiples. Which I like that because you can provide your art at a more affordable price to people who maybe can’t afford a $2,000  painting. You can sell them a $30 lithograph. And it also allows me to create the patterns I really like.”
Several pieces of artwork featured in Sigmon’s exhibition were created using lithography, but she also ensured other mediums were included in the show as well.
“All the imagery is created with lithography,” Sigmon said. “I have a lot of straight framed prints, like maybe two walls of straight framed prints. I have 3Dboxes that are built, a lot of them are interactive so you can open them or touch them, or they have hinges or something, so you can play with the art a little bit. It’s a little less intimidating to me than art hanging on a wall that you can’t touch. One image is a big installation piece, so it’s a big walk-in piece with a door and you walk in and have a whole ornamented interior. It’s kind of a mix of things, some amateur woodworking and carpentry, getting involved there.”
Sigmon is part of the bachelor’s of fine artsprogram at UNCA, which requires seniors to create a solo art exhibition open to the public.
“Everyone who graduates has to put on a solo exhibition,” Sigmon said. “Which is super demanding, but really cool. There’s going to be a lot of really good shows this year. I think we have five graduating shows going up and they’re all really high quality in my opinion.”
Senior Amelia Rosenberg, a BFA student with a ceramics concentration, enjoys Sigmon’s artwork and is excited to see what Sigmon accomplishes in the future.
“Lindsey’s work is a declaration of healing and triumph, as well as a beautiful remembrance of times past,” Rosenberg said. “She welcomes the viewer into space full of nostalgia. Seeing Lindsey’s progress over past two years has been incredibly inspiring.I can’t wait to see where this work takes her.”
When she graduates, Sigmon will miss the synergetic environment the BFA program has provided her with and hopes to find a similar art community in the future.
“I love working in a collaborative fashion. I guess I can see myself working for a collaborative printmaking studio where you sort of assist other artists in sort of realizing their work in a print. Or, just working as a studio team kind of. I think once I graduate I’ll miss having the shared studio space, so I think I’ll want to get back into working alongside other people.”
While Sigmon is not fully certain on where she plans to live  after college, she knows moving somewhere with a community art scene is very important to her.
“Definitely going to do some traveling and see if that inspires a change of scenery,” Sigmon said. “But, yeah, it just depends on where I can find an art community that I really fit into. I’m sort of from this general area so I feel at home in this art community.”
Sigmon’s determined work ethic is noticed by many of her peers who work alongside her in the art department.
“Lindsey’s dedication and work ethic have been unwavering throughout the last three semesters,” Sara Burton said, also a BFA ceramics student and senior. “Even through some of the hardest times she is someone who puts all she has into the things she cares about and this shows in her artwork. Her knowledge of the medium and detailed drawings are admirable and the pieces she produces never cease to amaze me.”
Delete Image
Align Left
Align Center
Align Right
Align Left
Align Center
Delete Heading