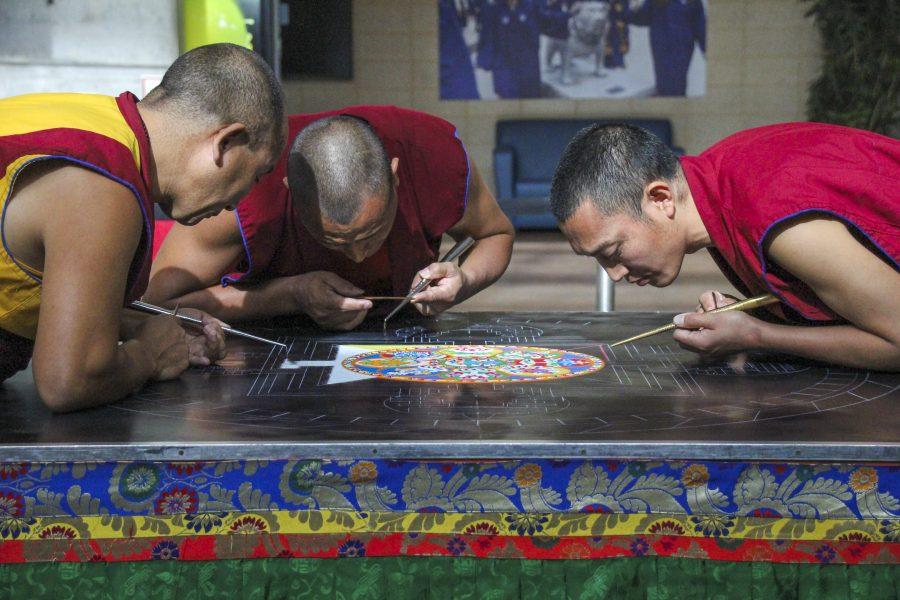 
The Highsmith Union bustles with commotion as students rush off to classes, chat over grilled cheese sandwiches and lounge in chairs to study. In the center of the excitement stands a group of Tibetan monks, standing out from the students in their long crimson robes. Seemingly unfazed by the environment surrounding them, the monks carefully and painstakingly add to an intricate sand mandala.
“Stereotype-breaking and learning is one of the most important things about cultural exchange,” said Cori Anderson, the chair of the Cultural and Special Events Committee at UNC Asheville. “You usually get that when you travel, but for students who are not going to be able to travel to places like Tibet and India, I think it’s a valuable thing to be able to have interactions like that right in the Highsmith Union.”
From Oct. 22-26, UNCA hosted a group of monks from the Drepung Loseling Monastery for a weeklong residency on campus as part of the Mystical Arts of Tibet world tour. The residency included lectures on Tibetan culture, a performance of sacred dance and music and the ongoing production of a sand mandala in the student union. Having previously hosted the monks on campus in 2014, the cultural events committee knew they wanted to host them again after receiving such positive feedback.
“So the way cultural event series work, it’s a series that’s programmed by the committee and the committee’s made up of faculty, staff and students,” Anderson said. “So the committee voted for this again because everything was so well-attended the first time and there was such positive feedback from students and from faculty and community members.”
While the target audience for on-campus events is students, Anderson said that she is always excited when members of the greater Asheville community are involved in campus events as well.
“Our primary audience is always students and that will continue to be the case, but I think just by thinking of things that are timely and relevant and interesting to students, it sort of automatically can also include lots of people in the community,” Anderson said. “I hope to make Asheville think of our campus as a center for culture and education, that’s important.”
For Anissa Roberts, a community member and teacher in Rutherford County, seeing the mandala became a priority after seeing a feature about the residency on the news. While attending the Future Teacher Conference hosted at UNCA on Oct. 25, Roberts made a point to arrive early in order to witness the mandala.
“We came early with the intent to see this,” Roberts said. “You see it on TV and think ‘it’s beautiful,’ but nothing compares to seeing it in person.”
After viewing the creation of the main sand mandala, Roberts took some of her students to participate in the community mandala. Located near the main mandala in the Highsmith Student Union, the community mandala aimed to give students and community members an opportunity to participate in this sacred practice, using the same tools as the monks.

“I think that this is a really unique experience for a lot of people, especially people who aren’t particularly artistically inclined and haven’t had any experience with design before,” said Katie Tillman, a senior at UNCA. “I think that the community reaction is just that it’s something really interesting, something they’ve never seen before.”
As a student worker for the events and conferences office, Tillman’s job was to assist people at the community mandala, helping demonstrate how to use the tools and show that creating a sand mandala might not be as intimidating as it appears. Tillman said that working this event has been her favorite cultural event she has participated in.
“My job is actually to help out and encourage people to come and help out with the community mandala, to show them you can get better with practice,” Tillman said. “I think that is is one of my favorite events that I’ve actually worked for. These monks really exude such great energy, like a really calming energy and it’s nice to get paid to come and make art and relax and kind of clear your head a little bit and contribute to making something beautiful, like kind of having a cross-cultural experience.”
For Anderson, helping students have a cross-cultural experience and gain a better understanding of a different culture was a major goal in having the event on campus.
“I was hoping that students, especially in the UNCA community, would be able to have interactions and conversations with the monks,” Anderson said. “Highsmith is very accessible so when they’re down there you can just ask questions and talk with them and feel like it’s an open, friendly environment. They are people, they are spiritual people but they are people.”
For Tillman, learning to use the tools in order to help the community presented a unique challenge. Working alongside a monk at the community mandala, Tillman had to find ways to communicate beyond language.
“A lot was just kind of learning the extent of his English and kind of picking up from his social cues as to what I should be doing,” Tillman said of learning how to create a sand mandala. “It’s just been more of like figuring out what is the appropriate thing, how to be respectful of the entire creation, but also just to take a lead on the technicalities.”
Anderson said that she the mandala was meant to bring people together regardless of language or culture.
“Probably the best nonverbal way to connect with people who are different from you is through some artistic expression and with the mandala, I think that’s true,” Anderson said.
Ultimately, Anderson hopes that bringing the monks to campus will help many students gain a broader worldview and develop a passion for learning about other cultures.
“I think that’s also a beautiful thing to look at with all cultures, specific things like faith, religion, belief and all things that are tied into them. In Tibet it’s a much more an ingrained part of daily life there, art and rituals, then maybe it is here,” Anderson said. “It’s just more ever-present and I think that’s a beautiful way of living.”
Delete Image
Align Left
Align Center
Align Right
Align Left
Align Center
Delete Heading