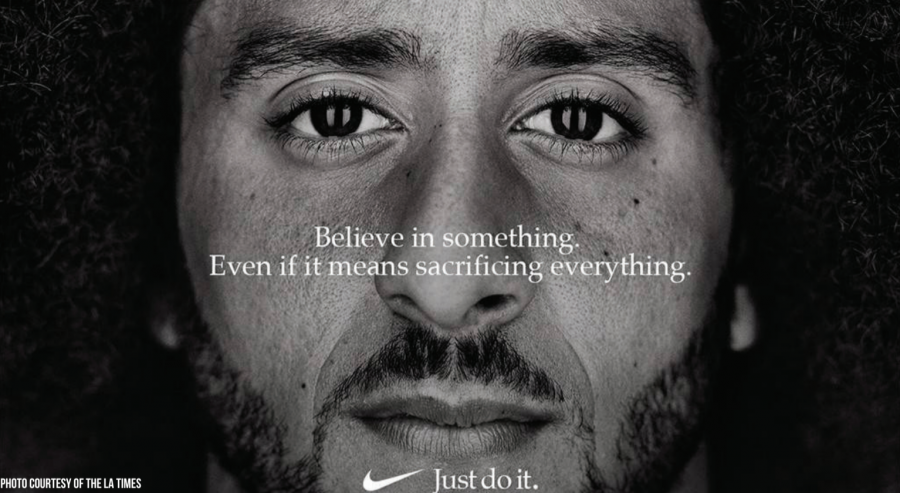 
Nike released the controversial Dream Crazy ad, narrated by Colin Kaepernick in honor of Nike’s 30th anniversary and several UNC Asheville athletes showed support for the use of Kaepernick in the ad.
Kaepernick began a peaceful protest by not standing for the National Anthem before a game against the Green Bay Packers in 2016 as a way to protest against police brutality. The protest began to grow as other athletes began participating.
Nike faced backlash from consumers who burned, shot at and tore apart their products and uploaded the videos to social media as their own form of protest against Nike’s choice to use Kaepernick in the ad.
Although Nike received some negative responses, they also gained a lot of supporters.
Grant Lindsay, track and field athlete at UNC Asheville, described Dream Crazy as powerful and progressive.
“I think it was sending a message to everyone using a powerful company and I think it worked,” Lindsay said.
Lindsay recognized the power most people have when they are able to ignore social issues, but that it needs to stop in order to make a difference.
“I feel that some people refused to address that there was a problem in this country and by refusing to acknowledge that there’s a problem, they can just live in ignorance and bliss,” Lindsay said.
Lindsay comes from a military family but said he does not feel kneeling during the national anthem as disrespectful. He viewed the protest as a fight for one’s beliefs and for justice in America.
President Donald Trump used twitter as a platform to express his opinion on the ad.“Just like the NFL, whose ratings have gone WAY DOWN, Nike is getting absolutely killed with anger and boycotts. I wonder if they had any idea that it would be this way? As far as the NFL is concerned, I just find it hard to watch, and always will, until they stand for the FLAG!” he tweeted.
Tearra Tatum, mass communication major and volleyball outside hitter for UNCA, said Nike made a good impact with their ad and said the reason for the controversy is due to the misunderstanding of why the protest is important.
Tatum’s expects an increase in Nike’s sales.
Edison Trends reported Nike’s sales increased by 31 percent from Sunday through Tuesday during the Labor Day holiday and sales rebounded much higher this year compared to years before.
“I think it’s really good publicity, especially for Nike, getting their brand more sales, but know it sparks a lot of controversy within the community. Overall, I think it’s made a good impact,” Tatum said.
Tatum said some of the controversy could rise from not being informed of the importance of the protest.
“I feel like most people don’t like what they don’t understand,” Tatum said.
Carter Kennedy, setter for the UNCA volleyball team, said if people would research more about why the protest happened, maybe they’d be more supportive.
“I think that a lot of people make statements about it, but they’re uneducated about what’s actually going on,” Kennedy said.
Kennedy doesn’t know if kneeling during the national anthem is the most effective method for protesting, but does support the protest and thinks Nike will benefit from the ad.
“Even bad press is still press. They’re getting so much awareness from this campaign that even though they have people that are burning their clothes and not going to buy them again, they already have their money and they make so much of their sales in other countries that I don’t think they’re going to be affected,” Kennedy said.
Kennedy recognizes Kaepernick spoke with a veteran about the protest, who suggested kneeling would be the best form for protest in order to still respect the flag and stand for what he believes in.
Brenda Kirkpatrick, the head coach for UNCA’s women’s basketball team, would support her athletes if one chose to use their sport as a platform for a protest as long as they were educated about the consequences and why they are protesting.
“Our society doesn’t always promote sacrifice and hard work. We tend to gravitate towards ease, comfort and going with the flow,” Kirkpatrick said.
Kirkpatrick mentioned the message from Dream Crazy is being consumed by the controversy.
“It’s easier to argue sometimes then actually listen, self-examine and ask ourselves ‘do we believe in something enough to sacrifice for it,” Kirkpatrick said.
Kirkpatrick said she enjoys speaking with her athletes about social issues and encourages them to be educated and confident.
Kirkpatrick teaches the women’s basketball team to use their platform to stand for love, trust, show kindness and hard work.
Though Nike received mixed reception, the quote in the ad stands.
“Believe in something, even if it means sacrificing everything,” the ad reads.
Delete Image
Align Left
Align Center
Align Right
Align Left
Align Center
Delete Heading