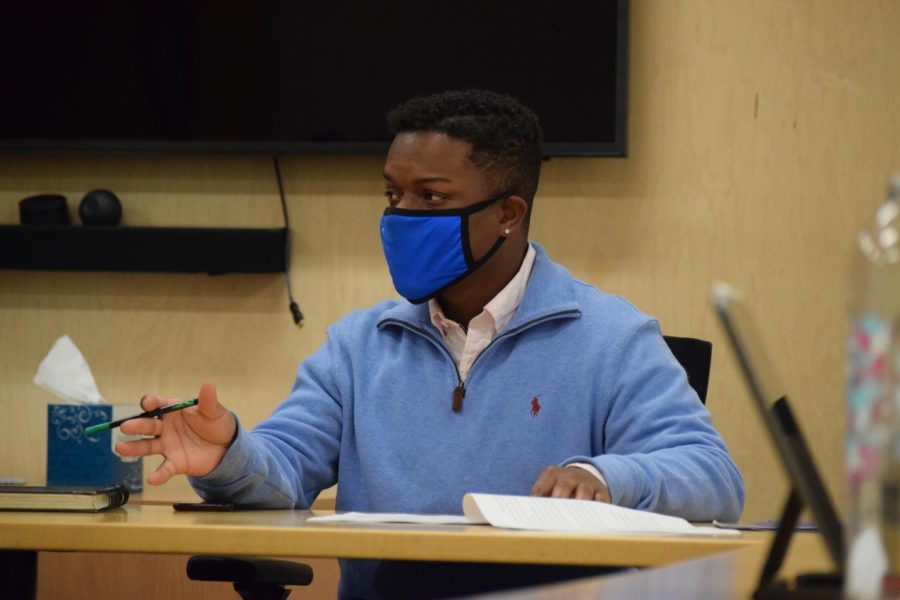 Ron Dumas, director of PILOT21 speaks to his team about the upcoming Change gala during a meeting in March.

In conference room 1972, four students gather to finalize plans for a 17-month-long project dedicated to finding a long-term and sustainable solution to food insecurity on campus.

As the project draws closer to competition, The Policy Innovative Leaders of Tomorrow finalize their plans for the program and upcoming Change gala with pizzas in hand.

“PILOT is about cause first, PILOT is about food insecurity first, it’s not about PILOT being the most popular or this or that. It’s about making an impact in the cause of reducing food insecurity at UNCA’s campus and that is our number one mission statement,” said Ron Dumas, director of the PILOT 21 program.

The Institute of Emerging Issues, a group that tackles issues in North Carolina through collaborative work, first sponsored the program when it began as a collaborative project aiming to teach students about the process of policymaking.

During the beginning of the project, nine colleges joined but as it progressed, more schools dwindled off.

“It’s really inspiring that my team has stuck with me for as long as they’ve had and are still responding to my text messages when I say ‘hey we’re gonna do this thing, we’re gonna do that thing, can we do this?’” Dumas said.

Throughout the group’s journey, Dumas established PILOT as an extracurricular rather than a priority to help the team avoid burnout.

“I wanted to prioritize their other responsibilities so that they could make this a sustainable part of their lives and not an extra thing that would burn them out,” he said.

Eventually, Dumas adopted the name, PILOT 2021 in hopes of continuing the original project.

The program identified four critical issues and created goals to fix them with their main focus set on highlighting food insecurity as a campus issue.

“We want to inspire other students to do the kind of work that we did and solve the critical and dynamic issues in their own communities,” Dumas said. “We want to set the framework for that, I want to show other students how it can be done, so they can do it better than I did next time.”

Having personally dealt with food insecurity during his freshman year, Dumas said he often had to choose between going to class or eating, which resulted in him having to eat frozen food for a month.

“There wasn’t a support system in place for me to ask for help and to deal with that,” he said.

When brainstorming solutions for the project, Dumas weighed his options and looked for a long-term sustainable solution. Food drives posed the most practical solution, but Dumas said food donated would either be close to expiring or unwanted food.

“Food banks have to be managed which means that it comes with a cost. Either students have to do it and I’m only going to be a student for, at that point 18 months, I’m about to graduate so food banks didn’t really work,” he said.

Eventually, the group decided on a multi-faceted longterm approach which required working with multiple groups on campus.

“Working on this particular issue, I’ve been able to connect with other students that care about this issue and we can work together to find a solution or contribute to overcoming the issue,” he said.

Hailey Carter, a senior sociology student and fellow team member of the program since its creation sits at the table adjacent to Dumas.

“She’s really the humanizing voice of this program,” Dumas said.

With a background in Sociology, Carter knew nothing about policymaking and was hesitant when Dumas initially asked her to join.

“He believed I would be a good fit for it. And I said, ‘OK once you get more information about it, I would love to hear about it,’” she said.

After learning more about food insecurity’s impact on the campus and not wanting to graduate without being involved in something, Carter joined the program.

“I was totally unfamiliar with the idea of it and I thought it would be really cool just to have something that came from your brain go into action,” she said.

Still new to policymaking, Carter said she went into her first meeting feeling intimidated due to her colleagues coming from other NC colleges.

“I thought of policymaking as political for a while, and I’m not into political things and that’s what steered me away from it at first because I’m not really into that sort of field, but then when I realized what it really is and what it is at its core, I was swayed more to join. Because it’s just difference-making,” she said.

Carter said they ran into issues with recruitment and scheduling, but she never felt burnout due to the project being emphasized as an extracurricular and not a priority.

“Schoolwork always comes first and once that was established, Ron was very understanding of what was going on and didn’t bombard us with a bunch of tasks,” she said.

According to Carter, a common misconception about food insecurity revolves around student finances.

“College costs money and you have to have some kind of money or something to get you here and that comes along with, ‘oh you got money to be here, you have money for food,’” she said.

Despite some hesitation from students about sharing their experiences with food insecurity, Carter said others are open and not afraid to voice their opinions.

“They know what kind of change needs to happen,” she said.

With all members set to graduate in May, Carter said the possibility of the project fizzling out remains a personal worry.

“There’s always that chance that it will go nowhere, but I think it’s raising enough awareness that we’re kind of in that safe zone,” she said.

After hearing a classmate speak during a public policy class, Dumas asked Fisayo Bashorun, a senior management student and now policy director of the program, to join PILOT.

“I had a lot of opinions about public policy and Ron was like, ‘hey I like your opinions come and do this thing with me,’” Bashorun said.

With the program consisting of students from varying majors, Bashorun said everyone adds a little bit of what they’re learning into the project.

“I’m business-oriented, I’m all about efficiency. How can we work faster and get quality over quantity, but also keeping a high momentum in producing quality,” she said. “Hailies sociology background allows her to see all perspectives of the situation, looking at all the dynamics, especially when talking about poverty, all kind of like the socio-economic factors that come along with that.”

Bashorun worked throughout college to have money for the food she wanted to eat, but when she quit her previous job, she found herself having to ask her parents for money.

“I was just living off $100 every two weeks. And I have my savings but those are your savings, you don’t want to touch it, but now I’m eating my fruits, eating my veggies, I buy my smoothies,” she said.

Although Bashorun has a job and can afford to eat what she wants, she said it’s a human right to have food, and said the belief that food insecurity is a rite of passage or is just part of life remains a common misconception.

“It’s not a rite of passage into life, it’s a systemic issue,” she said.

This misconception leads others to not see college students as food insecure due to them having access to various restaurants or grocery stores.

“People like to think that because college students have all these access to X, Y, Z they can’t be food insecure, but people also have to understand that some college students can come from homes that are in severe poverty and they are only here from grants, they don’t have the safety net or the security of their parents giving them a money allowance and they do rely on their campus to feed them,” she said.

With the program coming to its end, Bashorun said she wishes more students knew about the initiative.

“I wish there was a way for me to telepathically send messages to students about this or how to access this, or better yet if blimps were still a thing I would be paying to get a blimp flying through this campus constantly,” she said. “I wish we were able to get the word out to students in a more efficient way rather than word of mouth.”

Bashorun said she does not anticipate student rejection of a shared meal swipe program but does acknowledge that some students might oppose it.

“‘But I pay for my own food, but I paid for my meal swipes why do I have to give it away.’ If there are any complaints that would be the only one,” she said. “People who are on campus are extremely supportive and they know that this program is essentially benefitting everybody because students that are fed are students that are happy,” she said.

Another goal Bashorun has is to help students speak about their experiences with food insecurity more openly.