From struggling in Russia to an aspiring Asheville florist 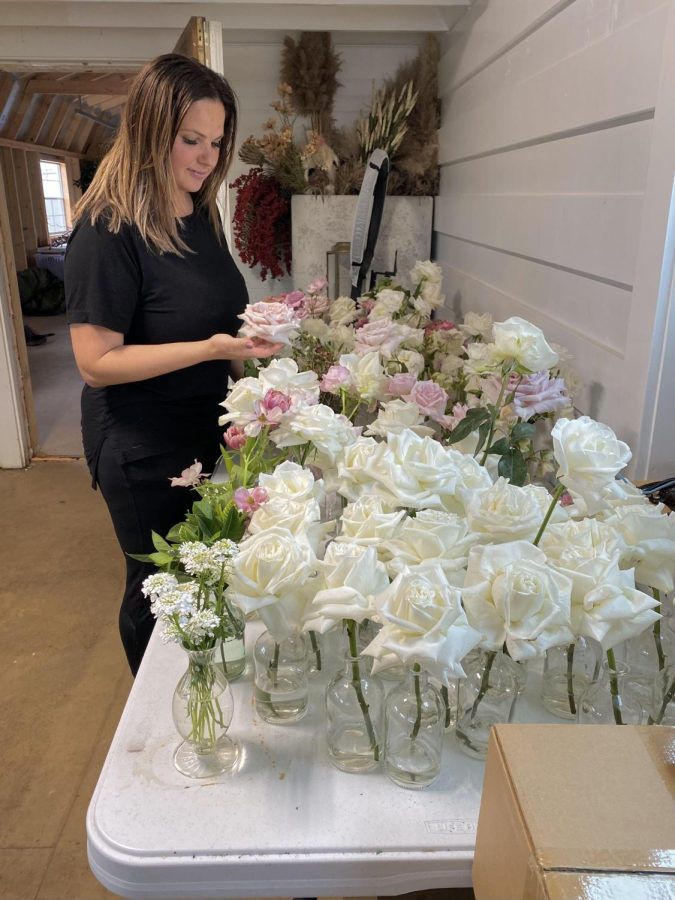 Daria Krasnov looks at flowers in her studio.

There were only three days left before Daria’s family was supposed to leave their life in Russia behind but they were still missing a key piece. They still needed a sponsor to help them make the move to America.

From the age of five, Daria Krasnov knew she wanted to leave Russia. Every year she would tell her friends she was going to move to America until her dream came true at the age of 13.

“I always believed I was going to move to America,” she said.

Krasnov was at church in Massachusetts when she laid eyes on her future husband, Viktor Krasnov, four years after she made it out of Russia.

He had traveled from California to Massachusetts to visit the place he didn’t know was Daria’s home church. Turns out the miles he crossed didn’t just stop there: Viktor Krasnov’s journey started in his native country of Ukraine.

Was it love at first sight?

Krasnov and Viktor have five children together, three boys and two girls. Each one carries on the thick Russian accent of their parents as well as the gift of being bilingual.

Outside of their newly remodeled home in Alexander, North Carolina, Daria’s youngest daughter Deborah runs around their swing set in rainboots, pouring sand into the back of a toy dump truck.

Their cat starts to make a mess of the sandbox and Krasnov quickly jumps up, shooing it away and reprimanding it in her native language as she talks about differences in Russia and America.

“People have opportunities here. If they want to be successful they have the opportunity to go learn, to open a business and become successful. Over there, not really,” she said.

One night, while waiting anxiously to leave Russia, Krasnov’s mother had a friend in America who caught wind of their situation. Within those crucial three days, a sponsor was found from the church in Massachusetts and all of the legal papers were signed.

“God did a miracle. He made all of the plans align,” Krasnov said.

A year passed before they were able to make the move and the date it fell on was one everyone would end up remembering.

Krasnov and her family loved life in Massachusetts, feeling blessed by their church family there.

Thanksgiving arrived that year and there was no one at the church to create what marks Slavic tradition – massive floral arrangements. Krasnov offered herself to do the decorations.

“In Slavic community, we have lots of materials. We love materials the most,” she says.

With this new job, she went in search of places to buy flowers, ending up at the shop where her husband used to buy her flowers.

She was met by a very sweet man who showed her how to do all of the arrangements. This encounter opened up the door for Krasnov to work at his shop with him every now and then.

On the side, Krasnov began to plan weddings but she didn’t really have the chance to work with floral arrangements.

Five years ago, Asheville became home to Krasnov, Viktor and their children.

A local friend of Krasnov asked her to make some simple flower arrangements for her wedding to which she responded “of course!”

Not long after, another bride inquired of Krasnov about wedding flowers. The conversation didn’t stop there as she offered to run a social media page for Krasnov, saying she could help her look more professional.

With marketing help now, Krasnov was able to focus on her true passion in the wedding industry.

“I fell in love doing just the flowers. I started getting good clients because of the help with my Instagram page,” she says.

The continuous growth made Krasnov realize she could no longer work out of her small house and she needed a studio.

Behind her stands what used to be the small house, half the size of what it is now and lacking in the beautiful wooden porch just finished by Viktor.

Pairs of shoes adorn the platform leading into the front door where Krasnov’s dad stands behind white marble counters, prepping meat for the family. Three of her children sit on the couch watching cartoons underneath the large wooden beams that support the newly added section of the house.

The gravel driveway leads down into storage sheds filled with equipment, fences holding five newborn baby goats and three dogs barking. Up the hill holds an even larger enclosure with chickens and land still waiting to be put to good use. At the very top stands Krasnov’s flower studio, built by her carpenter husband.

“I love getting to be a part of their special day. Every wedding is different and it’s so fun to create the special arrangements and bouquets for each individual bride,” Krasnov said, smiling just talking about it.

She has big plans to open up a franchise and find more designers willing to work with her. Krasnov would especially love to teach them how to do European style flower arrangements.

“That’s my passion. It’s more of an organic, classy and romantic style people, especially in Asheville, don’t do,” she said.

Almost every wedding Krasnov works, Viktor is at her side. The florist business can be a heavy and tough job, often lifting buckets of flowers filled with water and arches during transportation. Much more than simply arranging flowers goes into this line of work.

Viktor loves the detail work, especially when he builds houses, so Krasnov told him it was the same concept with the flowers and he still enjoys it.

“Each wedding we have around 3-to-5 hours to work so there is no time to talk or work slowly. We have to finish our job. After the weddings, I always thank him a lot. He’s great,” she said.

As an entrepreneur in a foreign country, Krasnov has much advice to share. She talks about the importance of never giving up, dreaming big and accomplishing those dreams.

“Put all your effort into what you do. Work hard and then you will get success. If Slavic people can do big things, people who grew up here can definitely do it,” Krasnov said.

Learning English was once a barrier for Krasnov when trying to grow her business. She felt like she couldn’t speak well so that kept her from doing more. Now, she has no fear.

“If I don’t understand, I just ask questions. But now I know what I’m doing and I will do it the best,” she said.

Shirin McIntosh had the opportunity to work with Krasnov when her son got married. He was marrying the love of his life and McIntosh wanted them to have the perfect flowers.

She fell in love with Krasnov’s artistic talent and knew her style would be perfect for her son’s wedding.

“A lot of florists look the same but Daria’s just has art to it,” McIntosh said.

The types of flowers Krasnov uses are not mainstream and Shirin knew her future daughter-in-law would be pleased with this.

The day of the wedding, Krasnov and Viktor created a beautiful, wooden arch covered in flowers. McIntosh said she felt nervous, wondering if things were going to get done in time. Turns out, Krasnov never gives reason to worry.

“She definitely knows what she’s doing,” McIntosh said confidently. “She got everything done in a very timely manner, nothing was last minute.”

Krasnov named her business Dream Events by Daria, but the work behind it trickles down the family tree.

When Krasnov brings the flowers in, her children unpack them. After they are done putting the flowers in the baskets, they help clean all of the leaves and dirt up from her studio.

Her oldest son at age 12, Elisha Krasnov, can now do simple arrangements.

David Krasnov, 11, has a favorite part of every wedding he helps out with – cleaning the flowers in preparation. Elisha says making bud vases takes first place for him.

Krasnov has built a legacy for her kids and taught them many things. David says she taught him to never give up.

“She teaches me to always do something better,” Elisha said.

When COVID hit, Krasnov discovered a designer in Russia she loved who would host instructional live videos. Krasnov immediately went to the local wholesale shop and asked for some flowers so she could practice and learn more.

“I learned a lot from her during COVID and we ended up becoming good friends. Now it’s two years later and I still send her my work to check,” Krasnov said, scrolling through her phone for pictures.

Krasnov plans to one day fly to Moscow to personally learn from her. She says she learns every day and never stops asking questions.

To Krasnov, each wedding becomes special. She takes a step back, sees her bride, sees her flowers and decides how she can display not only the beauty but the personality of the bride in her arrangements.

“If the bride is tough, I know the flowers to choose. I’m not going to do very delicate ones; it’s going to be a rustic style. If she is very soft and sweet, then I’m going to use delicate flowers to show how she is inside,” she said.

With each wedding and each arrangement, Krasnov has a vision that goes above and beyond.