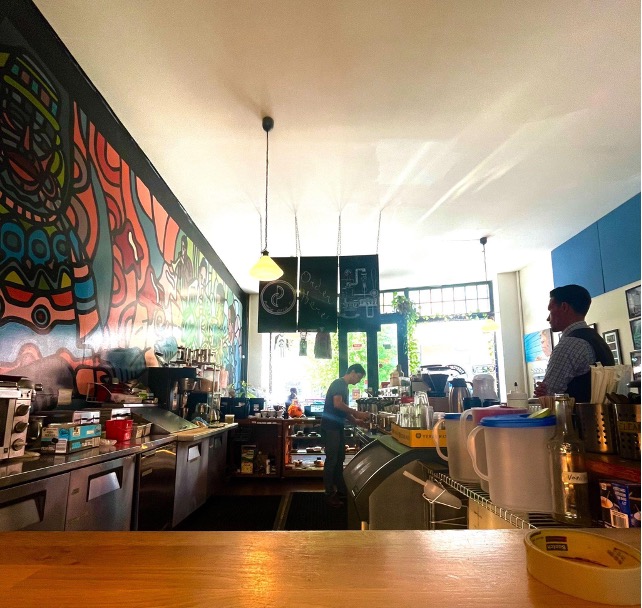 The streets moved frantically with people in front of the Asheville Art Museum. In typical fashion, canvassers stood at every corner looking for donations or signatures for a petition. Calling out compliments and friendly jabs in hopes to build a connection long enough to listen to what the canvassers have to say.

“Nice sunglasses! Looks like you want to see some children be saved!” A voice called out from the concrete corner. He wore a red vest with white lettering reading ‘Save the Children’ on the breast.

Save the Children, an international organization that fights for education, health and protection of children, finds itself in many communities providing support for those who need it desperately.

“The donations help feed children that are below the poverty line, in WIC programs or receive free or reduced lunch,” Rose McGinn, a full time canvasser currently working for Save the Children said. “We get some food directly to their homes. On weekends and breaks they don’t have access to these meals that are, oftentimes, the only meal they have all day. One in four kids in the Appalachian region are facing food insecurity and we’re trying to bridge that gap to get healthy and nutritious meals all the time.”

Representation of minority populations doesn’t stop at restaurants, retail and art galleries. According to the 2021 U.S. Census, 13.9% of Buncombe County residents are below the poverty level and 23.3% of children fall below the poverty level. International organizations such as Save the Children work with local communities to feed the children that need it.

“I believe the way that they get the food, through food bank collections and things like that,” McGinn said. “What we do is provide the funds to get those meals to their house and identify the children who need the support.”

Populations like those below the poverty line and racially marginalized communities are disenfranchised in a variety of ways such as affordable housing, access to applicable resources and education accessibility. Historically, these situations are difficult to break out of as they exist to be chronically hereditary.

United Way of Asheville and Buncombe county researched children and families below the poverty line and found that 78% of children in poverty graduate while 91% of their peers not experiencing poverty graduate. Gentrification of Asheville impacts populations like that of The Block, a historically Black community. Local and state organizations and departments are progressing to repair this system.

Local organizations in Asheville, such as the Young Men’s Institute cultural center, Asheville Poverty Initiative and Asheville’s Office of Equity and Inclusion all work to tie the community together and support those who need it.

Food Connection, an organization that sources their meals from caterers and institutions like UNC Asheville, works with culinary leaders to provide food for Asheville residents. They have since branched out to other communities such as Black Mountain and Mecklenburg county.

“When everything shut down like UNCA and events being canceled, our food supply greatly decreased so we ended up fundraising to have local chefs prepare meals for us and that was our Chef Meal Program,” said Flori Pate, co-founder of Food Connection. “We have purchased about 55,000 meals from chefs since March of last year to connect to our neighbors in need.”

Addressing marginalized groups such as the impoverished has increasingly become cause for concern amongst local organizations.

“Food insecurity is something that affects so many children and adults too. When you’re a child you need a lot of nutrients and all of that stuff is a foundation to grow,” McGinn said. “When you don’t get that, you can’t work, you can’t go to school and you can’t live a happy life unless you’re eating consistently. I think it’s more trying to help families, trying to help children and all of those things. Part of life is bringing a community together.”

Adrienne Nirdé, associate director of the North Carolina African American Heritage Commission, said grassroots volunteers are what makes change since they are hyper-connected to their communities and the locals.

“We work with what we call grassroots heritage practitioners, people who do this work who are not attached to the historical sites, who may work in a historical cemetery, be a part of a cultural center or a small museum,” Nirdé said. “(We) make sure they have the connections and professional development opportunities that they need to do their work.”

The NCAAHC works throughout the state to designate and mark a variety of significant sites to the Black population of North Carolina. A map provided by the NCAAHC shows hundreds of sites including burial sites, historically segregated parks and recreation and sites of historical and cultural significance.

The Africa to Carolina initiative seeks to identify, acknowledge and mark significant locations where Africans were disembarked from Africa to North Carolina.

“The want for this exhibit went all the way back to 2018,” Nirdé said. “We had a series of community engagement events to listen to people and hear what they want. In terms of this history, folks were really interested in finding out more information about the history of North Carolina that isn’t talked about, certainly not in schools. They wanted a way to have more research done and engage with it.”

The North Carolina Department of Natural and Cultural Resources implemented an equal opportunity plan which sets forth increasing educational opportunities for children and families, supports rural communities economically. As well, the office works to preserve and enhance existing historical and cultural sites and promotes diversity and inclusion in departmental programs, recruitment, administration and community engagement.

NCAAHC notes in their map of African American cultural sites the Young Mens’ Institute cultural center as a historical register site. The YMI cultural center, sitting at the intersection of Eagle and South Market, serves as a key part of The Block, a historically Black center of commerce and community.

The Block features a staple in any neighborhood: a cafe. Pennycup Coffee sits on South Market Street and shares a plethora of art, photography, music, information and maps detailing the history of The Block. The backsplash behind the coffee bar is a massive mural and photos cover the opposite wall. Colin Demos, a barista at Pennycup, said people know what they’re walking into when they come to Pennycup.

“We’re in The Block, a culturally and historically Black neighborhood and community center,” Demos said. “Triangle Park has a whole mural that spans the history of Black Asheville. I think it’s important that when people walk in here there’s recognition of what this building is and it’s not really unintentional. It’s in your face, it’s our entire wall, pictures of The Block throughout the past century.”

Today, The Block continues to thrive but not in the same way. Gentrification wiped out The Block for some time. Alexandria Monque Ravenel, co-owner of the Noir Collective in The Block, said gentrification happens and there’s not much done to fix what has been broken. The landmark decision in Shelley v. Kraemer in 1948 set the precedent that state restrictions on land and housing based on race were in violation of the 14th Amendment’s Equal Protection clause. While this moves to end discrimination based on race in housing, Ravenel says gentrification continues to push Black people out of their historical neighborhoods.

“Whiteness comes in and washes everything away,” Ravenel said. “Gentrification is a real thing and who talks about it? Nobody really talks about it but it’s happening right before our eyes. People see it as progress. I’m not saying we don’t need progress, I’m not saying we ought to not move forward but do we have to wash everything else away in order to do that? I wonder if it’s a struggle on both sides: how hard is it to wash people away? What kind of consciousness can do that work and not feel anything for the people it’s being done to?”

Mental health communities struggle to see specialists that look like them, Dyamond Dickenson, a behavioral analyst at United Healthcare said.

“I was majoring in nursing for children when my mom got diagnosed as bipolar and schizophrenic,” Dickenson said. “I know, for myself, mental health is really important. Coming from an African American, my mom wasn’t seeing a therapist that looked like us. The representation was off so we got involved and I changed my major to psychology. I loved therapy as a child and I believe that the youth don’t make excuses. I wanted to get involved in child psychology and save children and make better humans instead of what we are now.”

Representation within the mental health community can be few and far between. According to the American Psychological Association, 84.4% of psychologists currently practicing self-identified as White, the second highest percentage ranks at 6.2% self-identified as Hispanic.

“I believe that representation is 100% important because, coming from a caucasian woman, coming from an African American woman, we can relate on a lot of things but there is going to be a common denominator, aspects that you may go through that I’ve never been through and vice versa,” Dickenson said.

Nirdé said that having a connection to a community and the people within it creates a sense of home and belonging.

“I think it’s important to have grassroots workers, especially in a heritage and cultural space, because they’re community members,” Nirdé said. “They know their community and know what they want to share and what they want to show the public what’s important and special about their own community. They’re prime examples of folks who are passionate about this work and knowing very personally what’s special and unique about it.”