In May of 1963, Birmingham children rallied together on behalf of their parents, fighting for their right to work in a segregated America. Betrayed by the politicians of the time, the children recognized an injustice and proceeded to try and amend it.

Birmingham was not a peaceful protest. That May, children were hosed down by their own fire department, pre-teens were bused to jail, and dogs were sicced on children so young they had just learned to tie their shoes.

These children had to make sacrifices no child should make: missing school at an age when their education should have been their top priority.

Their protest was a catalyst for the Civil Rights movement, which lead to the desegregation of Birmingham and the passing of the 1964 Civil Rights Act

Once again young people must band together, but for a different cause.

At just the age of 16, Greta Thunberg has created an international movement. Every Friday she and thousands of young people inspired by her, protest against politicians that ignore climate change.

“For well over a year, young people from all across the globe have been striking from school every Friday demanding our leaders to take responsibility and to unite behind the science,” Thunberg stated.

Mary Ellis, 14 years old, has been protesting at the Charlotte-Mecklenburg Government building since February, skipping school on Fridays as well. Thunberg joined her this week in Charlotte, bringing the turnout, which Ellis described as often lonely, to around 1,200 people.

“It is we young people who are the future, but there is not enough time to wait for us to grow up and become the ones in charge because we need to tackle the climate and ecological emergency right now,” Thunberg said in her 8 minute speech.

We are 11 years from irreversible damage according to the United Nations. The United States continues to receive 81% of its energy from fossil fuels, according to the National Academies of Sciences, Engineering, and Medicine.

Unlike Birmingham, Charlotte’s protest was non-violent, yet there has been no major legislation after multiple years of climate change activism. We don’t have time for the slow process of changing minds. The earth is dying.

These two young women and many others have been doing what they’re supposed to do in a democracy when dissatisfied. They’ve exercised their right to petition and they’ve told our leaders time and time again but the job has not been completed.

“I have not found much hope in politicians and corporations. It is the people who now are our biggest source of hope,” Thunberg said, being met with much applause from the empathic audience.

“While we young people may not be able to vote or make decisions today in this society, we have something just as powerful, and that is our voices. And we need to use them. Whether it is by making the adults surrounding us to vote, or put pressure on the people in power and the politicians who are supposed to serve us or whether it is spreading awareness among people our own age to urge them to do the same,” she said.

The Yale Program on Climate Change Communication found in an April 2019 survey that 69% of people believe that climate change is happening. But simply believing in climate change isn’t enough, one must also participate politically and vote. Yet is voting itself powerful enough to enact change?

North Carolina has been accused of inadequate representation of its citizens for years, as Fair Districts NC words it, politicians pick their voters instead of voters electing politicians.

This is done by an undemocratic practice called gerrymandering where voting districts are drawn in a way to disenfranchise or enfranchise a certain demographic that way elections are guaranteed to end up a certain way.

Laws that require certain types of ID’s, election days that fall on business days, removing polling locations and paper only voter registration forms are other ways to suppress voters, according to senior political science major Chase Loudermelt. Loudermelt is writing her thesis on youth voter suppression and tools that can be used to fight it.

She said that these forms of suppression hurt blocks of voters like young people and minorities, who are the most impacted by climate change.

“I do believe that suppression of certain voting blocks, such as youth voters, that are more likely to believe and to eventually see the effects of climate change, is a way that certain politicians continue not having to pass any type of environmental reform,” she said.

She also attributes money thrown at politicians by oil companies to the lack of reform.

“I think that disenfranchisement of voters is a piece of not getting environmentally friendly policies passed, as well as voter apathy and money given by oil companies to politicians so they won’t pass sustainable legislation,” Loudermelt said.

If voting isn’t enough and if peaceful protest aren’t enough, I look to the Civil Rights Movement for a trend and advice.

Some of the most well known protests were times people had to respond to violence by the state such as Birmingham and the March on Washington in 1963, Bloody Sunday and Chicago in 1965, all of which the protestors responded to police brutality.

While Martin Luther King Jr. was greatly honored for his nonviolent activism in the civil rights movement, he recognized in his 1967 American Psychology Association speech the violence committed by the state should hold more shame than riots that happened in retaliation to that violence.

“Let us say boldly that if the violations of law by the white man in the slums over the years were calculated and compared with the law-breaking of a few days of riots, the hardened criminal would be the white man,” he said.

Thunberg called out world leaders for their inaction at the U.N’s Climate Action Summit in September.

“You have stolen my dreams and my childhood with your empty words. And yet I’m one of the lucky ones. People are suffering. People are dying. Entire ecosystems are collapsing. We are in the beginning of a mass extinction, and all you can talk about is money and fairy tales of eternal economic growth. How dare you,” she said.

Today not only are people experiencing very obvious forms of violence like police brutality, but they’re experiencing a government that commits violence through inaction.

“He who passively accepts evil is as much involved in it as he who helps to perpetrate it. He who accepts evil without protesting against it is really cooperating with it,” Martin Luther King Jr.

To not regulate the companies causing unclean air and water, poisoning families is violence through inaction.

To not stop loan sharks that prey on the most vulnerable of the 8 out of 10 Americans (according to a survey done by CareerBuilder) living paycheck to paycheck, is violence through inaction.

For the government to sit by while the earth dies—and the people with it— is violence through inaction, the question is, according to Thunberg, when do we do something about it.

“I think the tipping point we’re all waiting for is when we the people truly realize what we can accomplish together and we know that tipping point will come, the question is just ‘when?’,” Thunberg said.

She wasn’t the only one that day to insinuate that non-electoral means may have to be taken because of lost trust in the government at the protest.

Jerome Wagner has been with 350 Charlotte, a volunteer grassroots group that has  addressed climate change for a decade and said that a sense of urgency needs to be felt by the people.

Before the stage was packed up and the crowd dwindled, we were all tasked with taking bold steps to address climate change. Obvious measures like reducing your meat consumption, recycling and limiting your waste production were said, but that means nothing if radical legislation isn’t passed.

“When a long train of abuses and usurpations, pursuing invariably the same Object evinces a design to reduce them under absolute Despotism, it is their right, it is their duty, to throw off such Government,” Declaration of Independence.

This has been a call to action. Not to form a coup to overthrow the government, at least not yet.

This has been a call to action to those in power to do what they need to do as politicians before we do what we have a right and responsibility to do as civilians.

“Humanity is now standing at a crossroads. And when we look back at this crucial time, we want to be able to say that we did everything we possibly could to push the world in the right direction,” Greta Thunberg.

“We have also come to this hallowed spot to remind America of the fierce urgency of Now. This is no time to engage in the luxury of cooling off or to take the tranquilizing drug of gradualism. Now is the time to make real the promises of democracy,” Martin Luther King Jr. 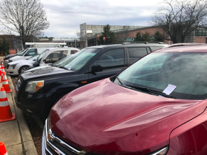