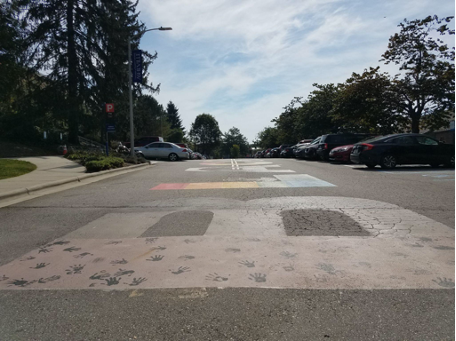 UNCA continues to support the campus Black Lives Matter mural and the movement itself as the anniversary of the campus shutdown passes.

“We are not going to back up or in any way be intimidated when it comes to our position on the importance of the messaging that Black Lives Matter,” said Vice Chancellor of Student Affairs Bill Haggard.

The BLM mural, which took eight hours to create, was painted by students of UNCA on Sept. 30, 2020. The day featured entertainment, speakers and other activities on the quad.

It was around 4 a.m. on Oct. 9 when a message was sent through a dormant public safety email account. The email detailed a general threat to the campus over the BLM mural on University Heights. Then, around 7:33 a.m., a Bulldog Alert was launched stating there would be no classes, practices or activities on campus that day, according to Eric Boyce, assistant vice chancellor for public safety and chief of police. Throughout the day, messages updated students and staff on the situation regarding the threat.

“As part of our emergency management strategies, we felt like it was important to issue that bulldog alert as part of a mitigation strategy, in other words, to remove students from any potential harm, so that was our initial priority is to make sure that students were safe,” said Boyce.

He contacted several partners with the FBI, SBI, Asheville Police Department and Buncombe County Sheriff’s Office to help in the investigation of the threat. Several of the agencies committed resources to protect the campus throughout the weekend, even when the lockdown ended at 7 p.m. that day.

While the investigation was ongoing, the chancellor’s senior staff came together to talk through the situation. According to Haggard, it was an ongoing discussion as they monitored the situation throughout the day, including conversation on what should be done about the BLM mural.

“There was a very quick conversation, and it was quick because there was instant unanimity, ‘Does anyone think we should have done something different about the mural? Does anybody think we should paint over the mural?’ Absolutely not. So another thing that happened on Oct. 9th that I think should be celebrated is there was a firm commitment in supporting the original decision to support the painting of that mural on the street,” Haggard said.

Lindsay Pontorno, a UNCA alumna, said she woke up to an email pertaining to the shutdown of the school.

“My roommate and I walked over to our suitemates’ room to see if they understood the threat was serious. They did,” Pontorno said.

Students weren’t allowed to leave their dorms. UNCA sent food so students could have meals while under lockdown. Pontorno said they weren’t given a lot of food, but she was thankful for what they did provide the students. She said around 7 p.m. was when they got an email saying that the lockdown was lifted.

“Throughout that day, my thought process was to not leave the dorm room unless prompted to do so. I was not overly worried about my safety because I tried to keep a skeptical mindset. The FBI was handling the situation, all I could do was trust them,” Pontorno said.

On Sept. 30, the anniversary of the BLM mural’s creation, Chancellor Nancy J. Cable sent an email to faculty, staff and students detailing that the investigation, which was in the hands of the FBI, was officially closed.

“We learned a lot from that day. We learned that our emergency management preparedness that we trained for, we had monthly meetings with our emergency operations center team, all those pieces operated well during that day,” Boyce said.

On that day, Pontorno said she was disheartened and realized that anything could happen to anyone and being on a safe quiet campus doesn’t change the fact that the world is dangerous.

“I learned that there are people in this country who do not believe in freedom for all. This is to the extent that these individuals threaten those who do believe in such freedom,” Pontorno said.

A year later and with the news of the investigation closing, UNCA’s support of the Black Lives Matter movement still thrives within its students and staff.

“We realize that different events impact students differently. It’s a reminder of my privilege and it’s a reminder that we absolutely must be constantly in tune with the experience of all of our members of our community and students of all identities,” Haggard said.

Ink of the Week: Student’s tattoos tell a unique tale