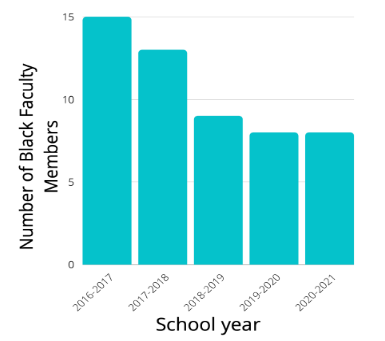 At UNC Asheville, Black students make up 5.61% of the school’s population, but only about 2.6% of faculty identify as Black, according to UNCA’s equity dashboard.

According to the institutional research fact book, the number of Black faculty members dropped from 15 to eight between the 2016 to 2020 school years.

The number of Black Faculty members decreased from 15 to eight in the span of five years.

Givens said the university wants to diversify faculty because they want to promote diversity and inclusion, not necessarily because of the declining numbers.

“If you look at most Ph.D. programs right now, across the board, there aren’t nearly as many Black, brown and diverse faces as we would want to have, and that’s going to have an impact on our pool,” the director of institutional equity said.

He said the location of UNCA’s campus also reduces the pool of diverse applicants.

“Asheville has some challenges,” Givens said. “It’s a place with a really high cost of living considering where it is. If a person is looking to accept the position here, or even looking to apply for a position here, they have to think about being able to live in the city.”

According to Givens, Black faculty numbers fell due to a series of retirements between 2017 and 2019.

numbers don’t really do is capture the story completely,” Givens said. “They are only going to capture what a person reports if they identify as one race specifically.”

The director of institutional equity said Integrated Postsecondary Education Data System (IPEDS) numbers discount the number of employees that choose not to disclose their racial identification. He also said the report lumped multiracial faculty into their own category even if they identified as Black, altering the statistics.

Kameron Henson, the president of UNCA UMOJA, said he was concerned about the decrease in Black faculty.

“Having more Black faculty and staff means that it will be more comfortable for me,” the UNCA sophomore said. “I’d have someone of a similar culture to go to if anything were to happen on campus.”

Diverse groups of people can learn from each other, said Leroy Wray, the recruitment and retention liaison adjunct and Department of Education adjunct at UNCA. He said the students want to see instructors that look like them and feel comfortable with them.

“I always suggest individuals go explore the country because you learn so much,” Wray said. “Just having faculty on campus that doesn’t look like you opens your eyes to a different experience and a different culture.”

He said he would like to see more minority students interested in teaching and hopes that students take advantage of the teacher licensure program at UNCA.

“A lot of people do not know about the teacher license option,” Wray said. “You can complete your major and get your teacher’s license at the same time.”

“Even in a position of power, there’s always someone you have to go to, like either a table of representatives or a table of people who have a say so in your decisions,” said PJ Jones, a UNCA junior.

The sociology major said the increase in Black executive members doesn’t make up for the low amount of Black faculty.

“Having Black faculty on campus gives me a place where I can feel secure,” Jones said. “It shows me that there are people here who I can maybe relate to, confide in or seek refuge in a safe space.”

Similarly, Henson said that he’d benefit more from an increase of Black faculty rather than administrators.

“I feel like I don’t know any of the executive staff,” the UMOJA president said. “They’re not the easiest to communicate with compared to the teachers that I see nearly every day.”

“One of the things that we have been able to do is make some specific hires and bring some new people in,” the director of institutional equity said. “I also think that part of that increase has been positions that may have been faculty positions, which could have been reclassified into leadership positions.”

He said the steps to increase faculty of color show that UNCA is serious about diversity and inclusion.

“I think that it provides some kind of guidance, role modeling and some mentorship, for students or young professionals seeing people like them in those types of positions,” Givens said.

Givens said this representation could potentially create a leadership pipeline. He said this could inspire individuals to consider the possibility of advancing in their careers.

“It’s important because we’re helping to prepare students for positions where they may be reporting to somebody who’s from a background that’s very different from their own,” Givens said. “Whether that’s somebody who’s BIPOC, or whether it’s somebody who identifies as queer or somebody with some type of disability, it is important to know how to be in relationships with a variety of people.”

To make these changes, he said it’s necessary to have an increase of students in higher education programs. He said part of that includes getting students thinking about higher education as a potential professional option.

“The recently developed University Fellows program has been really helpful in attracting diverse applicants,” Givens said. “I think if you start looking at the next fact books that come out, you’ll start to see there have been some increases in the number of Black faculty we have been hiring.”

Givens said over the past few years, the university posted positions in multiple places to diversify the applicant pool. He also said employers go through anti-bias training before faculty searches.

“We’re not necessarily going to solve this overnight,” Givens said. “But it does mean in maybe five to seven years, we may start to see some gradual increases in diverse faculty, and begin to see some changes.”