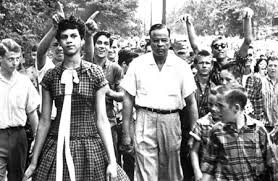 “Allen would be a deep part of Black history. Not just Asheville Black history, but history — period. So many young, Black women went there for an education for many different reasons. And those people have come out of there and done wonderful things. And the genre of those things would be entertainment by Nina Simone, right up to Nasa,” Bridgwaters said.

Former Allenite Henrietta ‘Cissy’ Dendy said an integrated group of people laid Allen’s foundation and sought to provide a haven and well-rounded education to Black women during a turbulent time. The boarding school, once standing on the corner of College Street and Town Mountain Road, accepted girls and occasionally a boy whose family helped with integration and received threats.

“When everything else was segregated, some white women got together with some Black women and they founded the school. I think the basic idea was that young, Black girls got some basic education in this area and got some skills where they can work in this area,” Dendy said. “There were Black girls from Charlotte and they were getting death threats on their families or their homes. So they sent their girls to be well-educated and ready for college — not necessarily get killed going to school or at home, because you got bomb threats at home.”

Bridgwaters’ father, Dr. Edwin Thompkins, worked to integrate schools and escorted Dorothy Counts-Scoggins — one of the first Black students admitted to Harding High School — past a menacing crowd into her first day of school in 1957. Bridgwaters’ family sent her to Allen High School after receiving bomb threats from those opposing integration and Dorothy Counts-Scoggins eventually transferred to Allen as well.

“Daddy was asked to escort her with her father, but her father couldn’t find a parking space. So my daddy started walking Dorothy into the school building,” she said. “One of our neighbors who lived a block down the street from us — we had gotten bomb threats when all of that was going on and one night they bombed his house. At that point, a lot of the kids whose parents were deeply involved in the movement decided for our safety it was time. They didn’t want to worry about us. There were several of us from Charlotte who came to Allen High School mainly because of the movement. They sent us to Allen to get us into a safe environment.”

Yvonne Mims Evans, former Superior Court Judge for the 26th Judicial District of the Seventh Division of the Superior Court, graduated from Allen in 1969. Raised by a single mother, Evans knew her time at Allen strained her family financially and chose to utilize her time wisely, later  attending Duke University School of Law.

“My mother was a public school teacher in Hendersonville and the year I came to Allen was the year that the schools desegregated and she wasn’t sure if she would have a job because all the Black teachers didn’t know what would happen. She felt like if I was going to high school, I needed to be in a stable environment,” she said. “I knew I had to do well at Allen because it was a sacrifice for her to send me there. I had a younger sister and she sent her there, too. And she was a single parent so it was a financial burden for us to be there and it was no joke. She meant for us to do well.”

Winona Williams Thompson, retired Lt. Col. in the U.S. Army and Allen High graduate didn’t attend the school to escape danger. She said her mother sent her to Allen to obtain a sound education, although parents sent their girls there under a variety of circumstances.

“For various reasons, I think it was kind of a getaway place,” she said. “I think some people sent their incorrigible girls there because they couldn’t be managed at home.”

She credits her success at Allen to the school’s small class sizes, along with the staff’s dedication, persistence and genuineness.

“The teachers were very strict. My next door neighbor, Mrs. Lucille Burton, was my home economics teacher. I always kind of looked up to her and rode to school with her quite a bit of the time. They were disciplined and they had great expectations for us.”

Dendy said Allen’s teachers provided a distinct, inspiring form of encouragement that stemmed from a place of sincerity and positivity.

“I don’t know how to describe that push that they would give you at Allen. I’ve had some friends who grew up in a household where whatever a ‘B’ was, was a failure. It never felt like that at Allen,” she said. “But it always felt like whatever you did, you’d get pulled to the side and you’d get the glory of being good and you’d get one, two or three of your teachers that would say ‘I know you can do better.’”

Allen’s teachers and students dressed properly and upheld a sense of professionalism. Evans said the school’s structure and formality may have played a part in Allen’s success by setting high expectations. She said teachers’ casual attire worn today varies greatly from what she remembers at Allen.

“While I was still on the bench, we had a program called truancy court, and judges would volunteer to go into certain schools and work with the children and with the parents on truancy issues. The first couple of times I went, I was shocked at how the teachers were dressed. They were so casual, you can hardly tell them from the parents. They don’t look professional, then I thought maybe they couldn’t afford it. I just think everything today is so much more casual than when we were in school and I don’t know if teachers have the same expectations of the children. I don’t know if parents have the expectations of the teachers. It’s just different,” she said.

Bridgwaters said Allen ran a daily dress check to make sure students were dressed properly and took care of their clothes, ensuring no stockings were ripped, no blouse was wrinkled and no skirt was too short. She said The Allenite’s distinguished appearance prompted their prim and proper reputation.

“Everywhere we went, a lot of times we’d hear ‘Oh, those are the Allen girls!’ We were always dressed appropriately and had the manners and were just the perfect little girls in that day and age. We were no different than the girls at Stephens-Lee or anywhere else, it was just the perception,” she said. “We were all assigned a day and a time that we would go to the laundry, and there was a woman there who would teach us how to iron. If it weren’t for her, I wouldn’t know how to iron a blouse today.”

Dendy said Allen produced many successful Black women including Nina Simone, who was sent to Allen from Tryon because her hometown failed to offer her the education she desired.   Simone spent her formative years in Asheville and made close friends, one of them being Dendy’s next door neighbor, Shirley Cannon.

Dendy recalled spending time outside listening to Nina sing on Shirley’s porch, only to be greeted with competition by competition from renowned Black opera singer Marian Anderson, and Dendy’s mother, Marjorie, who received a scholarship from Juilliard in the ‘30s.

“I was a kid, my mom was in the kitchen. Shirley and Nina were out here making music. My neighbor had a houseguest, Marian Anderson, who is a famous Black opera singer. She was visiting and Shirley and Nina were over there singing, so she started to compete with them by singing Opera to blow them out. My mother was in the kitchen and stepped out here and blew them all out of the water,” she said.

While Nina Simone remains a prominent Allen High School graduate, Dendy argued that many other former Allenites deserve equal recognition, such as Christine Darden, Ph.D.,  who worked for NASA and inspired the movie, “Hidden Figures.”

“That’s Allen. That’s the difference between Asheville High, where they can’t educate Black kids. It was Black and white women who did that at Allen. Someone needs to say that on a sign because that’s more important than where they built cannons for the civil war. Black and white women can definitely train Black girls, so I don’t know what the problem is here in North Carolina because the gap in achievement for Black students versus white students in this state is huge,” she said. “Somebody said that the white teachers can’t teach Black kids and I said, ‘When did that happen? Because I went to Allen, given it was a private school with Methodist missionaries — Black and white.’”

While society takes steps on a macro and micro level to progress forward from a sordid past of racial inequality and injustice, Dendy said mending the learning gap in our school system is a vital step in that process.

“We’ve painted the thing in the street — thank you, that’s pretty and I hope it doesn’t peel off — and we got national attention for reparations. OK, good. Now let’s fix the schools,” she said.

Dendy calls for a more prominent monument to represent Allen High School, which closed in the early ‘70s,  to honor its outstanding alumnae.

“If we’re going to keep markers around here, that school should have one,” Dendy said. “Allen closed and took it with them — a space for young, Black girls, young, Black women to explore without that pressure of boyfriends or anything else. To explore what you wanted to become.”

Understanding the history behind the rise of Asian hate