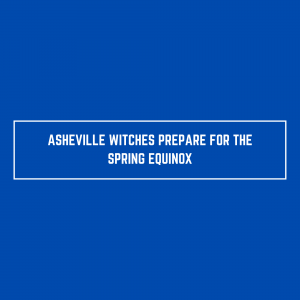 Before the store opened, a line of people stood outside the door. Standing in the rain, an older couple from Raleigh traveled all the way here to visit for their 50-year anniversary.

“There are not many stores that are old age metaphysical stores. That’s the thing about this store, is that it is a destination. All day long, I see people who walk in from all over the country that are engaging in different practices. This is one of the most beloved ones,” said Alicia Corbin, an employee at Raven and Crone.

Corbin is experienced with witchcraft and pagan religions. Before working at Raven and Crone, she was vetted for her knowledge in aspects of the practices of pagan religions and magic.

“The path is an honored place in our history and in our personal development. You don’t get to a certain level without practice,” she said.

With the spring equinox approaching, the store was packed with people preparing for the change of seasons.

Raven and Crone recently hosted Byron Ballard, a local pagan author and practicing witch. According to Corbin, Ballard helped found Mother Grove Goddess Temple, a chapel where people of all faiths can observe their personal beliefs. The temple hosts spring equinox celebrations, called Ostara by some pagans, every year.

“It is a time for celebrating new beginnings, for planting the seeds, metaphorically speaking, of what you want to see harvested in your life over the coming months. It’s a time to compost the things that no longer serve you so that you go into the spring with the soil of your soul well nourished,” Ballard said.

Ballard said she believes spring begins in early February before the vernal equinox. She observes the pagan holiday Imbolc, a traditional Irish celebration. By her reckoning, the spring equinox is actually mid-spring and not the beginning of the season.

“By the time we get to the equinox, we have been in the deepest, earliest spring and we see that this year, especially around here,” she said. “Part of that is global warming, but part of the rationale for that for me is that often when something begins, it begins in the very darkest gestational place.”

Mother Grove Goddess Temple organizes festivities for the holiday every year. According to Ballard, the temple has been criticized for taking a light and fun approach toward celebrating. She explained one year, the congregation wrote what they wanted to germinate in their lives on pieces of paper. They folded the paper into airplanes and threw them around the room.

“It was really fun, and it was fun to see people come in there looking burdened with the winter and sad and shy to see them pick up airplanes and fly them like little kids. It was really sweet but the next part of that was that you were to pick up the airplane nearest you and pray that prayer or do that wish,” she said.

Asheville is home to a large concentration of pagans and witches, according to Corbin. A UNC Asheville alumna herself, Ballard said she helped build up the strong pagan community that calls Asheville home today.

“I teach at a lot of festivals and conferences and people will say to me ‘Oh, you are so lucky to live in such a strong pagan community.’ I express to them that it’s not luck, it’s hard work. We’ve been building this community for a quarter of a century, and before we started building the community we built the building blocks for the community,” Ballard said.

Faces come and go within the pagan community, but it has now grown enough to keep itself going. Ballard said pagans are not a traditionally organized religion. Many choose to celebrate the equinox differently, through dance, solemn ritual or solitary observation.

“Ostara is originally an Anglo-Saxon tradition and it’s associated with the spring equinox and fertility and love and health and passion and vitality and dancing!” Corbin said enthusiastically.

According to UNCA professor of religious studies Rodger Payne, spring equinox celebrations date back to early pre-Christian Western Europe. Nature based religions dominated the region at that time, before the spread of Christianity. Christianity spread through cities in Europe and did not reach rural areas until later.

“Originally, ‘pagan’ meant those living out in the country. They continued to practice, then Anglo-Saxons, druids and other pre-Christian groups, practiced religious ceremonies that were very tied into the agricultural cycle,” Payne said.

Payne said by the time Christianity reached rural Europe, the religion was closely associated with politicians who used the church as an extension of their political power. People who resisted conversion didn’t fight against the church, they just didn’t fit in with christian society. Older women were usually the people accused of paganism because they were the typical healers and herbalists of old rural European society.

“They became the stereotypical witches of Christian Europe, when really they were probably a lot like your grandmother or great-grandmother who had some home remedies and things whenever you got sick. So, a lot of it is just stereotyping these older women as being not only outside of Christianity, but even hostile to it. That’s where the idea comes in that these are women who sold their soul to the devil in exchange for these healing powers,” he said.

According to Payne, immigrants who came to Western North Carolina from Ireland and Great Britain brought over folk remedies and lore. He said they are the ones responsible for causing self-identification  as pagan to become socially acceptable.

“What contemporary paganism has done, like what Byron Ballard practices, has simply been to return to a religion based on these types of cycles of where the earth is seen as passing through a period of darkness only to have come again to an age of light, or a period of light and rebirth. These are very deep ideas for us human beings,” the professor said.

Ballard said Mother Grove’s celebrations are always tied to nature and they are meant for everyone to enjoy. The celebrations involve telling the ancient Greek tale of Persephone and Demeter. Demeter, the goddess of agriculture grieves her daughter’s disappearance and her sadness engulfs the world in winter.

“None of these holy days require either the participant or the viewer to believe in divinities that are not their own,” Ballard said.

Raven and Crone has a stock of books on many subjects of pagan and magical study. Among tables and chairs, perfumed by the scent of freshly brewed tea, patrons are welcome to sit and read with a little cup of the day’s tea. Corbin encouraged those curious about witchcraft and paganism to read.

“Talk to people who are practicing, and try some stuff because magic is all about intuition. Celebrating the seasons is so much more meaningful and it feels so much better if you can use your intuition and feel what’s going on,” Corbin said.

According to Corbin, most if not all witches are pagan, but not all pagans are witches. She said she couldn’t define witchcraft in a way that would do it justice, but it is very old and very personal.

“Witchcraft is a cultural practice. It’s cross-cultural, almost. I don’t know of any culture that doesn’t have that practice, the practice of folk magic,” Ballard said.

The multi-faceted image of witches in the media perpetuates scary stereotypes, according to Ballard. She said she hates shows and movies like “Sabrina the Teenage Witch,” “Hocus Pocus” and “Bewitched” because they portray witches as something inhuman. She said the 1998 movie “Practical Magic” is slightly more accurate, speculating the writers probably consulted real practitioners.

“People love to be afraid of the green faced woman with the warts on her nose. They love that she’s wonderful in a scary cultural way. But, they also love the people who midwife on both ends of life. They midwife birthing and also midwife death. They love the idea that they are these beautiful young herbalists,” she said.

Ballard said anyone who is curious about witchcraft as a practice should start with their own families.

“I tell students that if you want to know about witchcraft in your family, don’t ever use that word, but ask your relatives about those old superstitions that used to happen in the family. What is it those old folks used to do that’s interesting or weird superstitions, and then you’ll start to hear about it,” Ballard said. “It can be really comforting to find out that you’re not the only witch in the family.”

Hemp takes a hit in Asheville