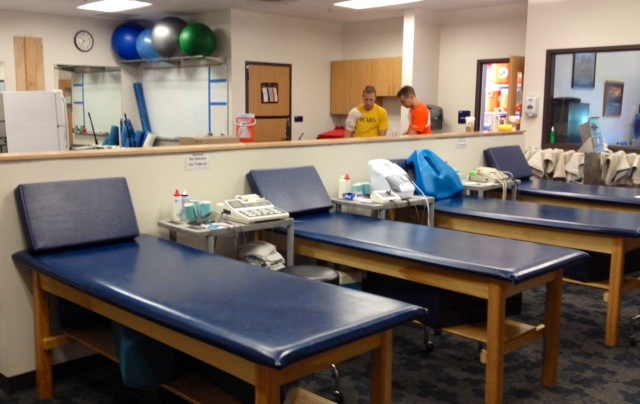 It is a few hours before the start of the big game. The entire team hangs out in the locker room trying to get out all of the pre-game jitters. Coaches frantically figure out the game-plan and try to figure out the opposing team’s weaknesses. Standing behind the scenes and being ready to help with the physical aspect of getting into the gameday mindset is one of the key players in all of this madness — the athletic training staff.

Men and women infused into the coaching staff at UNC Asheville, who may not necessarily have a big say in the plays being made, play a huge part in how a player will execute those drills. They keep the athletes at peak performance, and they are the people who have to give the red card and sit a player out.

Tim White holds the position of head athletic trainer on campus. In his eighth year at UNCA, he observes every possible aspect of the athletic training program.

“We oversee the prevention of injuries, we will do the evaluation if there is an injury,” White said. “We will make up a return-to-play program for injured individuals and work with our team physicians on a regular basis to make sure we are providing the appropriate medical care we need to.”

Paige Trent, the senior women’s soccer captain, works with the athletic training team throughout the soccer season. Trent said their warm hearts keep the teams going during tough times. The skills the public does not see is the backbone to every sports team on campus.

“Our trainers do a lot of the behind the scenes help, taping, stretching, wrapping — the things happening before training sessions and before games people don’t necessarily see,”  Trent said. “Most of us wouldn’t be playing to our full potential without them.”

Mathes Mennell, the men’s soccer coach, is a big proponent of the athletic training team.

“Athletic trainers are responsible for all facets of our student athletes well being. They serve as the clearinghouse for all aspects of their health,” Coach Mennell said. “They are at every practice and during the championship portion of the year and they are usually at every team function.”

Heather Mohler, one of the assistant athletic trainers on campus, is a six year athletic training veteran and has been working on UNCA’s campus for four of those years.

Mohler said many aspects go into working with a Division I sports team. The athletic trainers work as contact points for all of the clinicians working with or on the players.

“We work with the physical therapists to administer and carry out post-surgical rehabs,” Mohler said. “We work on concussion protocols and working on emergency action plans in case there is a situation on the floor, just making sure the athlete gets the appropriate care.”

The athletic trainers try their hardest to give the player what they need on-site, but sometimes they do not have the skills or equipment to do what the player needs in the moment.

“We may not be able to do everything, but we work closely with other professionals to make sure they get the care they need,” Mohler said. “We are kind of the first point of contact for the players then refer them to wherever they need to go.”

Michelle Demko, the women’s soccer coach, talks about the communication with the athletic trainers — an extremely detailed daily occurrence.

“I receive an injury report everyday from our trainer listing each player and what their potential injury is, their treatment or rehab program is and if she is ‘full go’ or ‘non contact’ during practice for that day,” Coach Demko said. “The trainer will suggest holding a player out of certain exercises if she has just ‘returned to play’ from an injury.”

Demko said the trainers also schedule meetings with players, depending on that specific player’s school schedule, to evaluate their injury throughout the day.

“Their willingness to serve the team with their knowledge, experience and warm hearts is impeccable,” Trent said. “Our teams are extremely grateful to have such a wonderful athletic training staff — they are a huge piece of the puzzle and we wouldn’t be the players we are without them.”

Coach Mennell said the athletic trainers on campus have a positive impact on campus with the student athletes. With their positive attitudes, rehabilitation comes easier to the athletes.

“As the primary liaison between the student-athlete and their recovery, the trainers have a crucial role in not only rehabbing the physical injury but helping to repair the ‘unseen’ damage injuries can cause,” Coach Mennell said. “Having a trainer with a positive approach is critical to this process.”

Tavarus Ferguson, an assistant athletic trainer who has been two years certified, said the athletic trainers play a role as counselors when times get tough for athletes. He sees injuries all the time, some worse than others, sometimes injuries that can end sports careers.

Trent said the trainers are cheerleaders for the teams and they keep spirits high in the long season. If you know who you are looking for, you can spot the athletic trainers watching the games from the sidelines alongside the coaching staff, media and sport fans alike.

“They are huge supporters of us, but also keep us healthy during our long seasons,” Trent said. “Our trainers also keep our spirits high when there are injuries, especially season-ending ones. They have a knack for keeping the team positive during the tough times.”

Coach Mennell said the trainers at UNCA are part of his staff and he could not see it any other way. Without the athletic training staff, the sports teams would be left to fend for themselves.

“The athletic trainers are a key part of our team and are wholly integrated into my staff. One of the things that is awesome about UNC Asheville is the fantastic quality of our sports medicine staff,” Coach Mennell said. “I cannot speak highly enough to accurately describe how important they are to what we are trying to do with our student athletes.”

It is easy to say the coaching staff and the athletes themselves play the most important and integral role in the game day aspect of the sport being played, but the athletic trainers are like a subtle referee looking out for the health of all involved in the sport.

The athletic training staff on UNCA’s campus not only seem to be pros at both their sports medicine jobs, but they are also part of the teams they are working with. As emotional support systems and physical support systems, the trainers on campus will always play a key role for our sports teams.

All that grace: pole fitness provides exercise and expression

The argument about eSports putting on an act