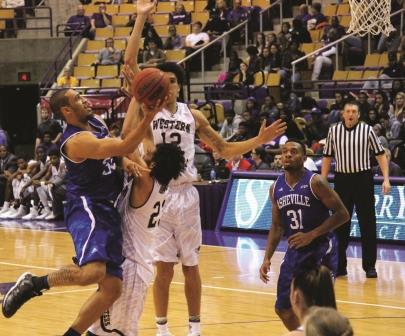 In the battle of the mountain, the UNC Asheville men’s basketball team was defeated 90-81 by Western Carolina University, despite being ahead for most of the game. UNCA has dropped their first two games to open the season, while Western Carolina has gone 1-1 to open theirs.

Catamount senior Mike Brown led the way for Western as he had a career high 29 points in the victory and scored 22 of those points in the second half.

“Mike played a great game for us tonight and we are lucky to have him, he’s a senior so he knows how to play the game and he helps us out a lot to achieve victories for our team,” said Larry Hunter, Western Carolina head coach. “UNC Asheville and Nick McDevitt are a good team and they always play hard and is a good game, much respect to him and his team.”

For the Bulldogs, sophomore Kevin Vannatta finished the game with his own career high of 20 points in the loss. The Catamounts did, however, hold Vannatta scoreless over the final minutes of the game.

“We played a good first half, but in the second half we couldn’t get the job done on defense. We scored the ball and scored 81 points in the game and if you score 80 points in a game you should win the game. We need to focus and work better on defense,” said Nick McDevitt, UNCA head coach. “We played good defense in the final couple possessions but Brummitt made a bank shot at the shot clock buzzer and Pughsley made a deep three. They hit big shots.”

WCU trailed the entire game since the first minute of the game when they had a 3-2 lead. From there, the Bulldogs held the lead all the way up to the 8:25 mark of the second half when the Catamounts tied the score 60-60. The Bulldogs quickly grabbed back the lead when junior Will Weeks scored a layup.

The Bulldogs started to fall apart around the final three and a half minutes of the game when Bulldog senior Sam Hughes fouled out and freshman Dwayne Sutton fouled out a minute later. WCU closed the game out on a 19-11 scoring run. Catamount freshman Elijah Pughsley put a dagger in the game when he hit a deep uncontested three-point basket with two minutes left in the game to bring the Catamounts up five.

“I was feeling my shot today and it felt good, I had confidence in myself and I took it and drained it. They should’ve guarded me closer,” Pughsley said.

UNCA will return home at Kimmel Arena on Wednesday night when they face the Lions of Mars Hill University at 7 p.m. to try and capture their first victory of the season.

One thought on “Bulldogs fall to 0-2 to start season”