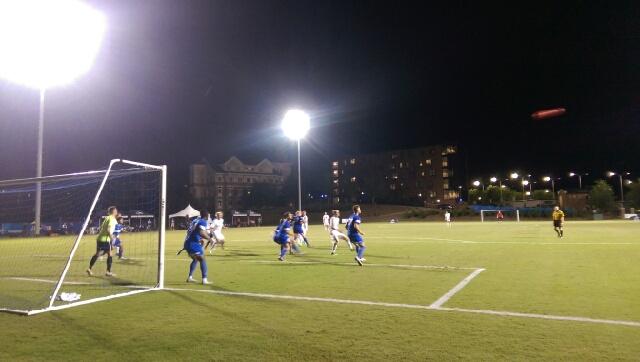 The UNC Asheville men’s soccer team defeated Longwood University Saturday to win its first conference match of the season. Forward Zach Joens scored with a minute and a half remaining in double overtime to finalize the comeback with a 3-2 final score.

Zach Compton, a defender for the Bulldogs, said that the team came into the game hungry for victory after being come back on and beaten by Georgia State Sept. 21.

“We were really frustrated by that game, we felt that we should have won that. We were the better team,” said Compton. “So we came into this game with a lot of fire in our stomach and a chip on our shoulder, and we didn’t let the opportunities go to waste this time.”

The Bulldogs led that match 1-0 from the seventh to 60th minute, but then a quick succession of three goals in three minutes, the two by Georgia state coming before and after the Bulldogs’, tied the score 2-2. The score remained stagnant until the end of regulation time. The Bulldogs lost 3-2 after conceding a goal as time expired in overtime.

“It was rough losing that game. It was close, but we knew we were the better team and should’ve won,” Anyafo said. “But we actually learned stuff in that game and we kind of flipped that narrative over tonight.”

The match versus Longwood certainly was a reversal of the Bulldogs’ loss to Georgia State.

Longwood scored off a header in the third minute and maintained their 1-0 lead going into the half. UNCA leveled the score in the 57th minute from a goal by Joens, assisted by midfielder Richie Lee.

“I was a bit lucky. I made a good run and Richie led me with a great pass,” said Joens. “The play just connected really well and that’s what we’ve been working on in practice so it felt good to have it succeed.”

Just as the Bulldogs took the lead twice against Georgia state, so did Longwood against the Bulldogs in the 77th minute. However, the Bulldogs flipped the script of the Georgia State match once more with an 86th minute goal off the head of Bulldogs’ defender Zach Compton.

“I’ve been getting a lot of chances so I’ve been hungry to score a goal,” Compton said. “When I went in for it, I was thinking, ‘We need to win and not concede, so get this goal.’ It was a giant relief to get that goal and tie the game.”

Neither team could score in the first overtime period nor for most of the second, but as the second period approached its final minute, Joens scored the winning goal during a one-on-one with Longwood’s goalie after receiving a through ball from Anyafo.

Compton said the Bulldogs’ survival throughout the overtime periods was due greatly to goalie Chris Katt.

“To be honest I thought they were going to put us away a couple of times, but he pulled off some magic,” Compton said. “He saves us at the most crucial moments-he kept us in the game.”

After Joens scored, the crowd erupted in applause, the Longwood players surrounded the referee and Joens scooped the ball up and sprinted up the hill behind the field. As his teammates swarmed him, he held the ball above his head and out in front of him to uproarious applause from the crowd in celebration.

Joens said “The Lion King” celebration was the idea of a former Bulldog soccer player. The victory over Longwood gave Joens an opportunity to finally put it to use.

John Mallow is a senior mass communication student at UNCA and Assistant Social Media Editor of The Blue Banner. He enjoys running, mountain biking, ska music, pizza and beer. He also wrote this bio himself, in the third person. Twitter: @jmallowjr Instagram: @johnmallow0602