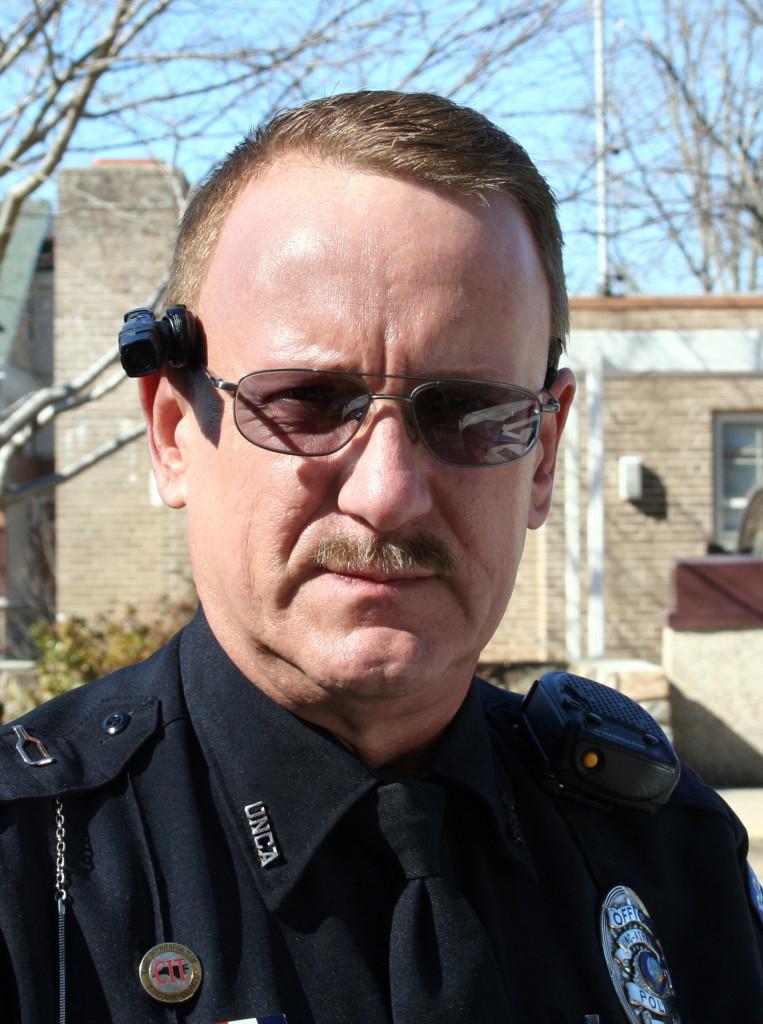 Editor’s note: This article has been edited from the original, print version to correctly reflect the names and identities of parties all involved.

As police officers’ use of body worn cameras becomes more apparent at UNC Asheville, debate continues to swirl around the ethics of new video technology in law enforcement.

“From certain angles, it could be interpreted as a good policy, for instance, if the video is being used to ensure that officers follow procedure in accordance with the law,” said Emilyann McKelvey, a freshman at UNCA.  “The policy definitely reflects on the bigger ethical question of at what point surveillance becomes an invasion of privacy. ”

Most of the footage recorded by body worn cameras occurs in public places, where people lose their right to privacy, said Richard East, the safety and emergency preparedness officer at Hampton University Police Department in Virginia.

East made an argument in favor of body worn cameras on the comment section of the online version of The Blue Banner’s original coverage.

“The on and off capability allows officers to turn them on during all interactions with the public, and off when they’re on routine patrol, or on their restroom or doughnut break,” East said.  “Video and the accompanying audio use up a lot of memory, and to add enough memory to record an entire shift would increase the cost significantly.”

Just as dashboard cameras in patrol cars became an accepted form of police recording in the past few decades, body worn cameras will become commonplace in American society, said Michael Yelton, a lieutenant at the Asheville Police Department.

“They just haven’t reached the point in their minds where they expect every police officer that walks up to be running a camera,” Yelton said.  “We’re not talking about undercovers doing any kind of sneaky video.”

Body worn cameras protect both the officers and citizens, as well as improve officer accountability by objectively providing a video and audio account of an incident, East said.

“Knowing their actions are being recorded will compel police officers to adhere to the highest professional conduct standards by those who wear them,” said East, a law enforcer for more than 25 years.

Body worn cameras bring up other ethical issues, such as how much access officers have to the recorded tapes, and whether the officers have the power to alter or delete certain tapes, said McKelvey.

“I think that as surveillance technology advances, the temptation for law enforcers to use it becomes greater,” McKelvey said.  “Police have the power to manipulate evidence in order to support their claims.”

The policy and procedures for the UNCA police department’s body worn cameras require officers to upload all recordings from the cameras onto online software, removing any chance to alter or delete material.

“Officer safety may improve, as those who assault officers know their actions will be recorded,” East said.  “Criminal convictions have improved, because offenders can’t tell lies that are disputed by the video evidence.”

Clear policies dictating when to have cameras recording aim to eliminate any possible evidentiary gaps in the recording, East said.

“If an officer with a BWV were to turn it off during an interaction with the public, the officer would not only be abrogating agency regulations, but also any court would likewise view with great suspicion any gaps in the recording when it was department policy that it be turned on,” East said.

Most policies of body worn cameras prohibit officers from recording in private settings and residences, unless necessary as dictated by agency or state and federal law, Yelton said.

“Any of our use of video has been geared to be within current legal boundaries, so anything we’re doing is within the bounds of federal and state law, particularly constitutional law,” said Yelton, who assists in the training of new officers.  “We’re not sneaking up and videotaping inside people’s residences when they’re not aware of it or anything like that, because those things require a whole different level of legal justification and scrutiny.”

The presence of cameras improves the behavior of everyone involved, as well as providing crucial evidentiary value, Yelton said.

“Always just work under the assumption that you’re being videotaped.  For most cops out there on the street, you’re going to do whatever that situation dictates, whatever the right course of action is, that’s what they’re going to do based on their training and experience,” Yelton said.  “It makes everyone on their best behavior.”

On campus, where students eat, sleep and learn, the cameras can feel like an invasion on personal privacy in a setting where students feel they have a right to be free and not be recorded, even if on their best behavior, McKelvey said.

“Case law is that police officers can enter private property only with a reasonable suspicion that a crime has been committed, and in those cases the owner or occupier has forfeited their privacy rights,” said East, a Williamsburg, Va., resident.

“It doesn’t look to me like most of these cameras could be perceived as sneaky,” said Yelton, an officer at the Asheville Police Department since 1998.  “Whether you’re a police officer or whether you’re a citizen or a suspect or whatever, it’s probably going to be there in your mind, and it’s going to affect what it is that happens in that particular incident.”