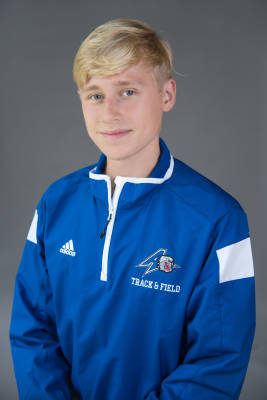 Whether it’s late at night when the rest of the world is sleeping, or early in the morning before the birds are even awake, you can find Zachary Boone, a sophomore computer science student from Bakersville, running.

The UNC Asheville runner is so passionate about running he even enjoys running late at night, when most incidences happen.

“I’ve almost died three times running, not from sports related injuries, but twice by cars and once by a coyote.”

Boone said this will never deter him from his passion.

This may be why he is considered one of the best runners this season for the Bulldogs men’s cross-country team.

“I live for the days where you feel in the rhythm and the flow, where you actually feel connected with the earth running,” Boone said.

The athlete said he came to UNCA last year after transferring from Ole Miss, where he also ran cross-country.

“Running is running wherever you go. Everyone works hard in Division athletics. I just didn’t feel at home there, but when I came to UNCA I actually felt at home.”

Boone said the connection the men’s team has is unlike any other.

“We all love each other and are all super connected, it’s like I can actually feel the team chemistry when we’re going through workouts and runs,” Boone said. “You’re running with your brothers out there. You, of course, wanna compete with them, just like you would your brothers.”

Boone said with running, you are putting two feet in front of each other every day, so having light-heartedness off and on the track or trail helps.

The runner said he trains with 16 other guys on the UNCA men’s team for about two hours every day, running 70 to 80 miles per week.

“We’re all considered to be in the ‘always tired’ category, so runners, at least me, really enjoy their time they can actually stay in bed.”

Boone said he thinks running is the best way to stay organized in school, as it helps him maintain a set schedule and rhythm to his life.

During the off season, Boone said he enjoys trail running and hiking to stay active, to keep moving and to remain motivated.

“I think the team and I are all mostly looking forward to Oct. 28,” Boone said.

“I’ve been running with my dad since I was about 3 years old, but I never thought I would eventually be where I am now as a runner,” Boone said.

He began running track in the 7th grade and began running cross-country five years ago. Boone said he is proud to see how far along he has come as an individual and pushes himself to his limit every day with the drive for success.

“Running is considered individual, but running with a team pushes me further and makes me better and hopefully our drive will lead us to triumph at the conference,” Boone said.

Excitement surrounds Asheville Tourists as they head to playoffs