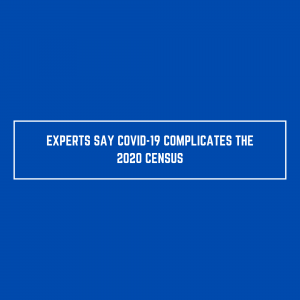 Experts predict the COVID-19 pandemic will cause the American population to be miscounted in the 2020 census, despite its new accessible format online.

“If the pandemic continues to necessitate such social distancing, it can hurt the bureau’s ability to do this important legwork to get an accurate count. The implications of this could be severe,”  said Assistant Professor of political science Ashley Moraguez.

Moraguez said the Census Bureau’s inability to reach out and publicly educate the community on the importance of the census will result in fewer respondents. According to Moraguez and information from the bureau, this means there will be less money from the federal government to fund Medicare and Medicaid, the Supplemental Nutrition Assistance Program, hospitals, infrastructure and many more government-funded programs.

Representatives from the Census Bureau were not available for comment at this time.

“Especially in light of the pandemic, this is the safest way to participate in the census this year, both for your household and for census employees. If a household doesn’t have reliable internet access, the Census Bureau will be sending out paper versions of the form this month,” Moraguez said.

UNCA Student Body President London Newton said she planned on having a census symposium on campus before the pandemic hit. Newton takes Moraguez’s class called Census 2020: the Politics of Counting.

“It was supposed to be a whole big thing on campus in collaboration with SGA where we do student rights week. One of the days was going to be a whole symposium with us,” Newton said. “It all got canceled so now we’re doing a social media thing.”

Chase Loudermelt, president of the political science club, said her club played a large role in organizing student rights week before everything got canceled.

“The Political Science Club has its hands in a little bit of everything around campus. The census is an important thing that we think should be on the minds of UNC Asheville students since it affects funding within the community that they live within,” Loudermelt said.

Bulldogscount, the Instagram page for the UNCA census symposium run by Moraguez’s students, shares important information for students in English and Spanish.

“All the students in my class and Dr. Anne Jansen’s U.S. ethnic studies class were going to present, as well as local experts and representatives from the Census Bureau,” Moraguez said.

According to Moraguez, all the students in her class applied to be enumerators, more commonly known as door knockers, for the Census Bureau. However, the pandemic forced many students to withdraw their applications. According to the bureau, enumerators make an average of $18.29 an hour.

According to census experts, accurately filling out census information ensures government funding goes where it’s needed and voting districts are drawn to accurately represent the people. Newton was going to give a presentation at the symposium on how the census affects voting district lines and gerrymandering, the illegal redrawing of district lines to dilute Democratic or Republican votes before the COVID-19 outbreak changed her plans.

“We’re a really big voting block— ages 18 to 35 is a really large voting block, and if we were to vote together then it would be really impactful but our stuff is really messed up right now,” the student government president said.

Newton said it’s important for students to know where they should fill the census out. If you live on campus, UNCA administrators will fill it out on your behalf. Information from the Census Bureau said if you live with roommates, you need to fill the census out for your household and know the full names, birthdays and racial identities of everyone you live with. The bureau also said if you are unsure whether or not your census has already been filled out, it is better to do it for yourself. It is easier for the bureau to delete duplicate responses than fill in the blanks.

However, Loudermelt said it is important to make sure you’re not being counted in two different places. This dilutes your voting power when districts are drawn, according to Newton.

“Young people are part of what is called a hard to count community and it includes typically young people, black and brown people, poor people, undocumented people— the census still counts undocumented people. That’s just people who either have a low response rate to the census or tend to not have access to filling out the census. By access, I just meantime. When you’re poor, you don’t really have time to worry about things like the census. There’s also a lot of hard to count communities that just have a general distrust of the government which is understandable,” Newton said.

Moraguez said she wants to make sure people understand any information shared on the census is kept secure for 72 years. No other government institution can gain access to identifying information on the census. The census is about counting every person in the U.S., not just adults or voters.

“A lot of us probably feel helpless right now—we want to help our community, but it’s challenging to do in the midst of a pandemic and during a stay-at-home order. However, filling out the census is one way that you can safely help your community right now. And the effect will last for the next 10 years,” the professor said.